FreeBSD is one of the oldest open-source Unixes that's still actively maintained and is directly descended from the original BSD Unix developed at the University of California at Berkeley in the 1970s: the Berkeley System Distribution. 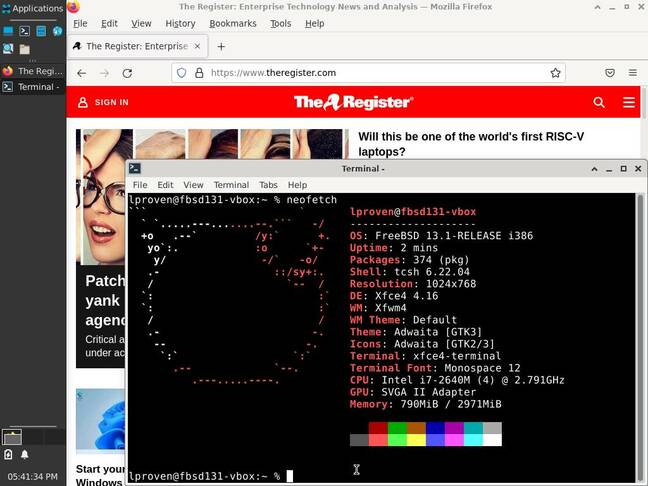 FreeBSD 13.1 with Xfce, but you can have KDE or GNOME or almost whatever you like

This version supports multiple processor architectures. It supports both x86-32 and x86-64 so can run on older PCs that are rapidly losing support from most Linux distros. It supports various flavors of ARM, both 32-bit and 64-bit, plus special versions for various ARM SBCs including several different models of Raspberry Pi. It also supports multiple POWER and PowerPC platforms, including 32-bit PowerPC and 64-bit POWER in both little-endian and big-endian iterations. Finally, there are pre-built virtual hard disk images for various hypervisors, on both types of x86 and 64-bit ARM and RISC-V.

There are three relatively mainstream descendants of BSD: FreeBSD, OpenBSD, and NetBSD (plus some even more niche, experimental versions, such as DragonflyBSD). Surveys suggest that about 75 percent of BSD users run FreeBSD. NetBSD focuses on being portable and supporting as many types of computer as it feasibly can. OpenBSD focuses on security and correctness.

FreeBSD just tries to be a capable, modern OS. It targets only reasonably modern hardware, and of all the BSDs, FreeBSD has the best support for modern PCs and the biggest selection of apps and drivers. There are native FreeBSD versions of many well-known FOSS tools, as well as some proprietary components such as Nvidia graphics drivers. If what you need isn't FOSS or can't be ported for some reason, FreeBSD can emulate Linux and run Linux binaries directly.

So it's a mature, stable, modern OS. Do you consider yourself a dab hand with various hues of Unix? Are you less than enthusiastic about the way modern Linux is evolving, with systemd and Wayland and Flatpak and containers everywhere? Then this could be the OS for you.

But saying that, get ready for a surprise. Installing FreeBSD is a little bit like installing Linux was in the 1990s. The installation process is text-based, and when it's done, you should have a computer that can boot from its own hard disk, connect to the internet (preferably over a wired Ethernet connection), and give you a command prompt. And that's it. After that, you're on your own.

This is why The Reg FOSS desk was so pleasantly surprised by OpenBSD 7.1 recently. The default installation left us with a GUI, which is pretty high-tech in BSD terms.

Even the newest FreeBSD is still a bit more basic than that. You had better be happy at a shell prompt and using vi to create a few config files because even after the installation program has finished, most things are done from the command line. We Googled how to install Xfce, one of our favorite FOSS desktops and one that doesn't require fancy 3D acceleration or anything. We found a how to and got Xfce up and running in just a few steps and a mere half an hour or so.

The other thing to point out is a more subtle difference, and one we've found that BSD types don't really get. Linux is a native PC OS: it was first developed on x86 PCs, and only later ported to other architectures. It feels at home on a PC. It uses standard PC partition types, it happily co-exists with other OSes, it uses native screen resolutions and control keys and other things as a matter of course.

FreeBSD, like the other BSDs, is different. It is not native to the PC, and while it runs fine, it expects a substantial primary partition to itself, inside which it builds its own partitioning system. Its console runs in plain VGA mode, and simple things like Ctrl-left and Ctrl-right don't work to edit the command line.

When you run Linux on a non-PC machine, such as a Raspberry Pi, it makes the computer act a bit like a PC. When you run FreeBSD on a PC, it makes a PC act a bit more like a Sun workstation or a DEC minicomputer.

There are perfectly valid reasons for this. FreeBSD is descended from 386BSD, the first FOSS x86 version of BSD, released in March 1992 – just after its rival commercial product, BSD/386 from BSDI, in January. 386BSD was developed by William Jolitz (who died from cancer at only 65 last March) and his wife Lynne. So, yes, the year after the start of Linux, but 386BSD was based on 4.3BSD-Net2. 1BSD was released in March 1978, so this was already a mature 14-year-old OS before it was first ported to the PC. It has its own way of doing things and only reluctantly deals with PC ways.

For example, once FreeBSD is installed, you can mount Windows and Linux partitions if you wish, no problem. What you can't do is put FreeBSD's root file system in one PC partition, its home file system in a different PC partition and so on, as you can with virtually every normal Linux distro. FreeBSD does things its own way. If you want to put it on bare metal, our recommendations are: use a desktop, not a laptop; have a wired internet connection, not Wi-Fi; and dedicate the entire PC to FreeBSD, don't try to dual-boot it with anything else. And as always, update the PC's firmware before you start.

Saying that, FreeBSD is a long-established OS and it has distros of its own, such as GhostBSD and MidnightBSD. They will catch up with version 13.1 soon and they may make the experience a little easier… but don't expect miracles. We also have high hopes for the Hello System, which we've looked at before.

The easiest graphical FreeBSD distro, PC-BSD, was swallowed up by TrueNAS creators iXsystems a few years ago and later discontinued, which is a shame. iXsystems is a remote descendant of BSDi, creators of BSD/386, and FreeBSD is the basis of the TrueNAS CORE and Enterprise NAS OSes. It's also the basis of the Sony Playstation OS, and quite a lot of it is inside Apple's macOS and iOS as well.

In our testing, in a VirtualBox VM, trying to install onto ZFS failed, and we had to start over with a blank disk and old-fashioned UFS, which worked fine. For all that it's a mature OS, it has a lot of rough edges, far more than any modern Linux.

Even so, it was easier to get 13.1 up and running than any previous version of FreeBSD we've tried. As such, we're impressed. The wholesale modernization that is occurring in the Linux world recently is driving some Linux gurus away, and FreeBSD is the obvious destination. The future looks promising for this OS with its roots in the early 1970s. ®