Desktop Tourism If you drop Dell's Latitude 5430 laptop from hip height onto vinyl flooring that covers a concrete slab, it lands with a sharp crack, bounces a little, then skitters to a halt. Drop it two meters onto sodden grass and it lands with a meaty squish on its long rear edge. The impact pushes a spray of water and flecks of mud through the crack between the screen and keyboard, with a spot or two of each making it onto the keyboard's ASDF row.

I know this, because I did it. And more.

If you put it in a domestic freezer after that drop onto wet grass, then pull it out after ten minutes, a couple of water and mud flecks freeze into little teardrops on the keyboard. The latch that holds the screen to the body of the laptop takes a little extra effort to open.

The machine is then unpleasantly cold to touch, but boots up just fine after its time on ice - and after the other indignities I inflicted. 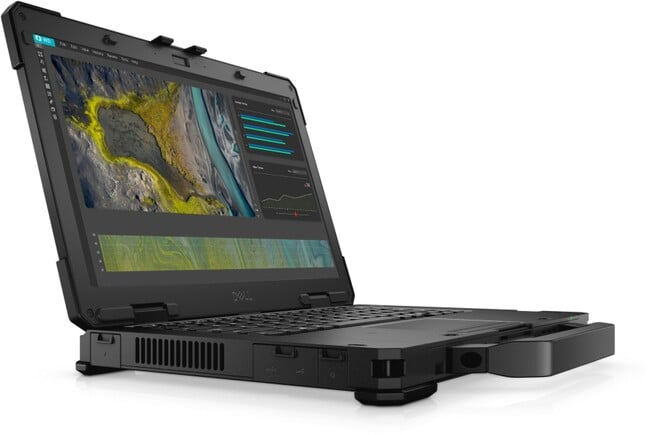 This is to be expected because the Latitude 5430 is a ruggedized machine rated to survive a 90cm drop, work at temperatures from –29°C to 62°C, and survive dust and sprays of water thanks to an IP-53 rating. It's armored with wedge-shaped buffers that wrap around its cut-off corners. All the dropping and sliding I performed imparted no scratches or dents to that defensive infrastructure.

The buffers and a carbon fiber panel that protect the machine give it a look that suggests cyberpunk-influenced designer luggage rather than military fetishism.

I think that aesthetic is a head-turner – but the machine is also a spine-wrencher.

At 1.97kg and 33.6mm x 340mm x 220mm it is heavy and bulky. It is more than double the size of my workhorse – a 2019 ThinkPad X1 Carbon – and doesn't fit comfortably into the laptop compartment of my messenger bag. Even getting it into the main compartment of that bag requires locking down the waterproofing flaps covering all I/O ports – and those flaps are finicky so I was never quite sure if I had closed them properly and left the machine fully protected.

A byproduct of the laptop's bulk is the surprisingly pleasurable experience of rear-mounted ports – HDMI, Ethernet, and a pair of RS-232 outlets on the machine I tested, with other options available – that make for less cable clutter.

Dell should have put the single USB-C/Thunderbolt port out the back, too. Doing so would have left a pair of USB-A slots, a 3.5mm jack, smart card reader and SIM slot as the side-mounted ports. 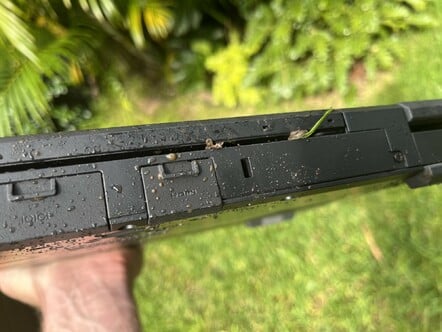 The 5430 after splashing down on wet grass. Click to enlarge

The machine is very pleasant to use. Its 14-inch HD display handles colors well enough for my needs and won't preclude sneaking in a movie, thanks in part to a coating that ameliorates direct sunlight. Speakers are tolerable, as is a keyboard that includes near full-size arrow keys. The touchpad is small by current standards, but performs acceptably. The webcam does a job.

Windows 11 is nicely unobtrusive, and its base price of $1,879 does not massively exceed prices for less-rugged machines.

The machine motors through a day of work. Most other machines I have used over the years have awkward moments during a day or week of work when the fan blows and things slow down for no apparent reason. This one just pushed through – an experience I don't expect from a Core i5. Specifically, it's powered by an 11th-gen i5-1145G7 at 2.60GHz, helped along by 16GB of RAM and a 512GB NVMe drive.

Desktop tourism? PCs and alternative devices have increasingly diversified into myriad and marvelous forms, but cloud-based tools make it easy to move between machines. So I've decided that in 2022 I'll use a different one each month and share the experience. This article is the third in this series.

The machine did, however, struggle with one workload: running an Ubuntu VM under VMware Workstation Pro. The laptop just did not enjoy running that at all – the desktop hypervisor hung, and performance of the host OS suffered.

My regular slightly nasty workload test – converting a 4K video to HD using Handbrake – required 5:22 in Windows 11, just 1:02 slower than the Core i9 machine I tested on my first desktop tourism adventure. But the same chore required 26:29 in an Ubuntu VM under VMware Workstation Pro.

That blowout didn't feel right, so I ran the same workload under Hyper-V and the conversion completed in 12:43 – a little sluggish, although the laptop hardly flinched while Handbrake went about its work.

Battery life stretched to nearly eight hours with the pair of 53.5Wh Li-Ion units I was provided, but as they're hot swappable, longer battery-powered ops are possible.

I think Dell missed a trick by employing Philips head screws to secure the removable batteries and carry handle, because airport security frowns upon carry-on screwdrivers. Other parts of the laptop are held together with hex bolts. The machine is put together with sufficient cleverness that I feel Dell's engineers could have built an interior niche to house an Allen key – they've already created one to store a stylus that I imagine would be very useful to keep dirty hands away from the pleasingly responsive touch screen. An inbuilt Allen key would mean one less thing to remember before taking this machine into the field, making it more portable and practical.

If you're looking for a laptop that can survive a lot of buffeting and the presence of water or ice, I believe this machine won't let you down.

But I feel most users will also find its bulk and weight frustrating – both in the field and once they return to civilization. In the latter setting, some will be able to tolerate its foibles because the machine performs well and will be a conversation piece.

Overall, however, this one feels destined to be shelved and shared among users when they head into the messy parts of the world – the smart card reader is the clue for that scenario – rather than a daily tool that does double duty in suits and boots. ®