Samsung and Red Hat have pledged to work together on developing software to get the best from emerging memory technologies.

The Korean giant points out that a bunch of storage and memory tech – NVMe SSDs, Compute Express Link, the combination of high-bandwidth memory and processing-in-memory, and data fabrics – all need enabling software if they are to work well with the kind of demanding applications they're promised to, well, enable.

The tech is likely to be used in different tiers, while sharing memory across devices is well and truly on the agenda as part of a renewed push for composable infrastructure.

Hardware vendors don't just fling devices over the fence and wait for an ecosystem to form. They usually engage with key platform and application providers early in the product design process to ensure their wares will work in the real world.

So it's a little surprising that Samsung's announcement of its Red Hat tie-up claims this is the first time the chaebol has teamed with an open-source software outfit with an aim to "foster engagements across the IT marketplace."

The relationship will see Samsung create a loftily monikered Memory Research Cloud in which the two companies "will develop and verify software solutions on diverse server environments."

You, dear reader, might be invited into that cloud to test the best memory hardware configurations to drive your applications to optimal efficiency.

Samsung says its Memory Research Cloud will be "an open collaboration hub" in which customers can test combinations of software and memory hardware. 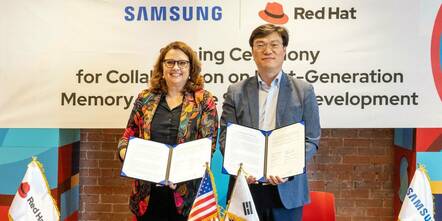 You can see it, too, right? ... From left, Marjet Andriesse, senior veep and Head of Red Hat Asia Pacific, with Yongcheol Bae, executive veep and Head of the Memory Application Engineering Team at Samsung Electronics, holding copies of their storage software pact. Source: Samsung

Samsung says work with IBM's Red Hat will also be shared with other orgs, such as the Linux Foundation, to ensure "full support in Red Hat Enterprise Linux, and with other open source software stacks."

Which sounds a lot like Samsung wants this work to be pushed into the Linux kernel – where it arguably belongs, given Linux's dominance of the world's server fleet. ®