All the the rage with gamers, mechanical type comes to office users – where cool goes to die

Review Logitech has rounded out its Master series with the MX Mechanical keyboard and MX Master 3S mouse. Both cost serious money, but are they worth it? 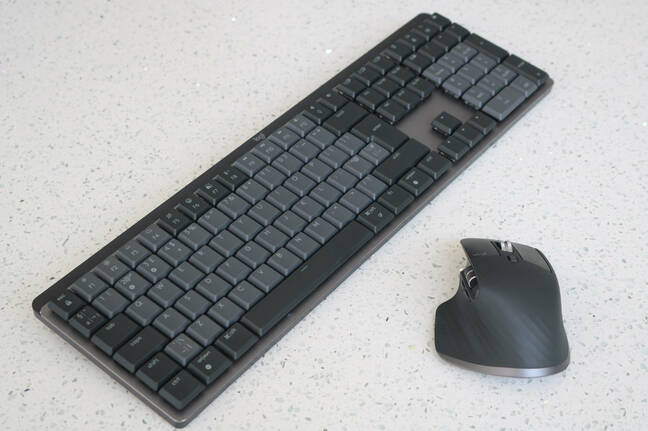 We've previously looked at Logitech's MX Keys Mini for Mac and came away impressed with the compact unit. The MX Mechanical keyboard is an altogether different proposition, for better and for worse.

Keyboards are highly subjective things. Some users prefer the short key-travel of a modern laptop-style keyboard while others would only allow their ancient IBM Model M keyboards to be prised from their cold, dead hands – regardless of the deafening clattering of keys being struck.

The MX Mechanical tiptoes down a middle path and can be specified with one of three switches: Tactile Quiet (supposedly with less noise and a "satisfying tactile bump"), Linear, and "Clicky". Our unit was the former and, to be frank, didn't seem that quiet, certainly when compared to the MX Keys Mini.

But if key travel is your thing, then the MX Mechanical will not disappoint. Key travel is 3.2mm and ever so slightly less force is required to press a key than on the MX Keys. Where the keys of MX Keys are soft and dished, those of the MX Mechanical are much more traditional, with more of a matte effect to them.

The keyboard is full sized and can switch between Windows and Mac machines without much in the way of effort (Logitech's Easy-switch function allows up to three devices to be connected and switched between.) A backlight is also present, which fires up when one's fingers venture near the keys.

The backlighting has a number of settings, ranging from useful to pointless gimmick; contact lighting, for example, makes modifier keys brighter (useful) while random lighting creates a "mesmerizing pattern" (not so useful.) All in all there are six patterns to choose from, all selectable from the keyboard without needing to go near Logitech's Options+ software.

The keyboard connects via either the supplied Bolt USB Receiver or Bluetooth (which is how we connected ours.) According to Logitech, a full charge (via the supplied USB cable) should keep things going for 15 days if you use the backlight and 10 months if you don't.

As for software support, the Options+ software permits custom actions for the top row of keys (although we were happy enough with the defaults) and the setting of backlight options as well as Easy-switch settings. Other Logitech devices (such as the mouse – see below) can also be configured.

Physically, the keyboard feels hefty, despite its relatively small size. The MX Mechanical comes in at almost a kilo, weighing in at 828g (1.8lb) while the more compact MX Mechanical Mini weighs 612g (1.3lb).

The materials feel as if they are high quality, although still do not have the hewn-from-granite feel of IBM's classic Model M.

And, for fans of the technology, the mechanical action will be highly satisfying, more so than the membrane and scissor affair of the MX Keys Mini. However, keyboard preference is very much a subjective thing. While this writer would probably opt for the MX Keys Mini if given the choice, a colleague would regard such a decision as the height of insanity.

Handy, then, that Logitech appears to have all bases covered.

The mouse, the MX Master 3S, is far easier to be objective about. At first glance, it is yet another strangely shaped mouse from Logitech, but it is made from pleasingly tactile and high quality materials, and a delight to use. As with the keyboard, the unit ships with Logitech's Bolt USB receiver if required, but we connected with Bluetooth once again.

Also like the keyboard, the Easy switch functionality is present (although one must turn the mouse over to get at the switch – thankfully the charging port does not require an Apple-style inversion.)

The MX Master 3S is also where the Options+ software becomes essential. While the defaults all work OK out of the box, to get the best out of the seven buttons, two scroll wheels (including a thumb wheel) and gesture button, one really needs to dive into the software to pick an action. The same goes for the DPI setting, which ranges from 200 DPI – 8,000 DPI depending on how expansive one needs to be. We found 1,000 DPI did the trick for most purposes, but changing it in the software (we tried the macOS version) was straightforward enough.

Logitech reckons that users should get 70 days on a full charge, and three hours from just a minute plugged into the included USB-C charging cable. The device is also nearly silent when pushing the buttons or scrolling the wheels, while feeling of high quality.

However, one potentially divisive aspect is the styling. Logitech has adopted what it describes as "an ergonomic silhouette" aimed at improving hand and arm comfort. Again, we'd argue that this very much a subjective thing. Certainly, my hand does fit the mouse well but there could be muscle memory that needs to be relearned. And those with excessively large or tiny paws may struggle.

Still, it is not as potentially visually alarming as the Lift although purchasers should consider if the user is right or left-handed, particularly since Logitech wants a cool $99 (€129,99, £119.99*) for the unit.

Keyboards and pointing devices were a high point in Logitech's recent financial results even as demand for PC webcams tumbled. The company's new devices are a recognition that while a move to a different way of working might result in different offices, keyboards and mice will always be needed. And Logitech is more than happy to meet buyers at wherever they are. ®

* And yes this pricing does not align with straight currency conversions, and means it both products are more expensive to buy in the EU than in the US, and even more costly if you buy them in the UK.