Far from the finished product and not obviously a game-changer, but intriguing nonetheless

Today I tried a prototype of the service, and can report it is … intriguing.

Participating in a WebEx Hologram session requires donning a VR headset, to which end Cisco offered me a Microsoft HoloLens 2. I found the current model pleasingly light and comfortable, and calibrating it took just a few moments of flicking my eyes towards some virtual objects projected into my field of vision.

With that done, I was introduced to a Cisco staffer in San Jose named Mohammed, who showed me a textbook about TCP/IP. 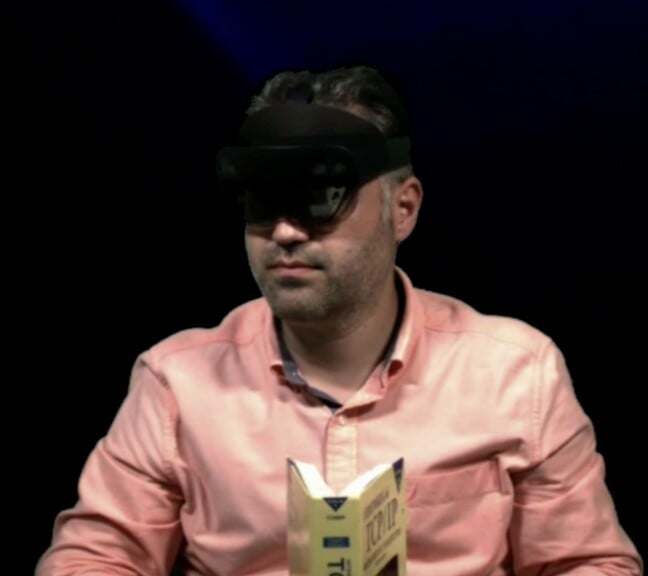 The view inside a Webex Hologram.
Click to enlarge

As depicted above, Mohammed showed me the spine of the book. When I moved my head, the perspective shifted and I was able to read the book's front or back covers.

Video compression artefacts abounded. Colors were weird and the edges of moving objects were often pixelated before resolving into sharper forms.

Mohammed next handed me a virtual Cisco product that, after a few fumbles, I was able to grasp and manipulate in holographic space. The gestures to do so were not immediately apparent nor intuitive, but in under 15 seconds I managed to move the device and rotate it. Detail was sufficient to let me count the ports on the device's rear.

My host then held up a physical Cisco box so I could compare the virtual and actual products. The real and virtual objects co-existed happily in the HoloLens projection.

I was then handed a model car and told I could look inside – which required putting my head into the virtual vehicle.

This was not an intuitive thing to do, as my head is substantially larger than the model I was shown.

But once I managed both to move my head towards the model and to pull it in the direction of my head, my view changed and I saw its interior. Another wiggle or two and I burst out of the cockpit and into the engine cavity, where I could view lots of pipes and other innards. 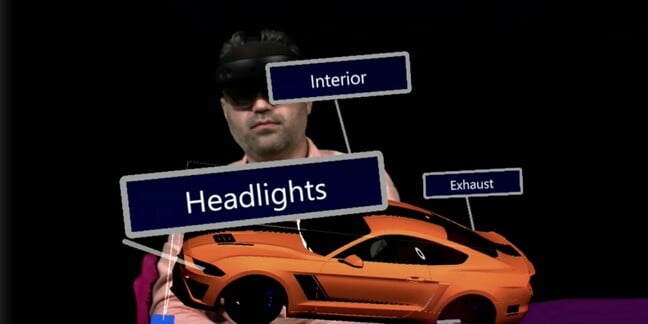 The next virtual object I encountered was a virtual model of a human skeleton, which again suffered from distracting compression artefacts as the machine driving the session struggled to render vertebrae.

Cisco thinks holograms will be welcomed by folks collaborating on content that has a third dimension. Product designers got a few mentions.

I found the experience far more engaging than a video chat. I do most of those in a browser and nearly always struggle to keep myself away from more interesting tabs. I'd pay attention for longer in a hologram because it is properly immersive.

Cisco folk told me the service is at least a year away from going on sale as a packaged product. I understand that a multi-camera rig was required to bring me a holographic image of Mohammed, plus plenty of bandwidth. HoloLens units start at $3,500, but Cisco promised me the holograms will work with other VR/AR headsets.

I came away from the experience impressed and intrigued, but without a clear sense of how this technology will improve productivity. It is unclear to me, for example, how much effort is required to create virtual objects.

But I’m also willing – no, eager – to try it again in pursuit of a better understanding of its potential. ®