Linux Lite has been around since 2012 and version 6, codenamed "Fluorite", is one of the first Ubuntu-based distros to offer a version built on Ubuntu 22.04 "Jammy Jellyfish", released just last month.

This is unapologetically a distro aimed at Windows users. For instance, unlike some distros, there are no difficult questions of what desktop you want – you get Xfce 4.16, with a trendy flat theme, but a somewhat retro default layout that reminds us of Windows XP. The Start button and window buttons have text labels, for instance. We liked that: it's simple, efficient, and welcome, but Zorin OS 16 manages a more modern Windows look.

Linux Lite also isn't bashful about including non-open-source freeware: the default web browser is Google Chrome. The very long and rather rambling release announcement says this is because Ubuntu distributes Firefox as a Snap package and that the developers wanted to shield users from too many package managers. That's fair enough.

There's also a warning that if you install Firefox from the Software Store, you will also install Snap support. Also legit. What we thought was somewhat strange is that the release announcement then contains instructions for how to install a Firefox .DEB package from an external repository. This seems out of place in a release announcement, not to mention that we would think that it's something the distro vendor should do, rather than leave up to novice users. 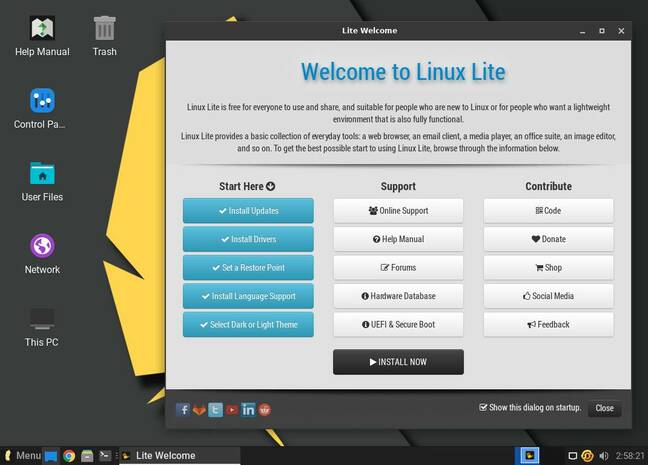 Linux Lite 6 has a clean, colorful desktop and a friendly welcome screen

Chrome is the most widely used browser so that will probably be a popular choice, albeit not one that will please FOSS evangelists. On the other hand, if being welcoming to Windows migrants is a primary goal, why not bundle Microsoft Edge for Linux? We tried it, and it worked perfectly.

There are a lot of small customizations in Linux Lite that differentiate it from the upstream Xubuntu distro, or obvious competitors such as Linux Mint's Xfce edition, or Zorin OS Lite. Some are evident, such as the Welcome screen, which reminded us of that in several Mandriva descendants. It's odd that even in the installed distro, this has a prominent "install now" button, though. Some tweaks are less obvious but still welcome, such as the powerline Bash shell prompt.

The very first desktop icon is a line to the "Help manual". That's a nice touch, even if we find the name to be a little redundant. To get a feel for the style of the documentation, you can read it online.

The Lite Software app has a list of 37 add-on packages, which is a mixture of FOSS software, such as Ubuntu's upstream "restricted extras" package – which we feel should probably be installed by default – to proprietary apps such as Skype, Spotify, Steam, Teams, and Teamviewer. There's no visible differentiation between free or proprietary tools, but then again, a new Windows migrant probably won't care.

The pre-installed productivity suite is LibreOffice, the stable version 7.2. Given that the distro readily includes so much proprietary freeware, we were surprised this wasn't something more akin to modern MS Office, such as WPS Office, as included in both Deepin and Ubuntu DDE.

Linux Lite 6 is a mixed bag. It includes a proprietary web browser, but one far more popular than Firefox. It includes many other proprietary tools, but not some we might expect. It includes more documentation than most free distros, which is a good thing – but its quality is variable. For example, the release announcement includes a note that a certain action may cause a crash, concluding with: "You tell me." We were also surprised that the "Upgrading" section simply says:

There is no upgrade path from Series to Series.

Even Linux Mint, which for a long time didn't support upgrades, does now, so this is a major omission.

Finally, Linux Lite is not a lightweight distro. The ISO file is over 2GB, and it flatly refused to install on a 12GB virtual drive. It left a 16GB drive well over half full. Using one of the lighter-weight desktops does not automatically make the whole OS light.

These quibbles aside, any PC new enough to have the 64-bit CPU that Linux Lite 6 requires will run it with ease, almost certainly much faster than it will run any supported version of Windows. The look and feel of the desktop isn't as modern as Zorin OS, but we actually prefer that, just as we prefer LibreOffice's traditional menus-and-toolbars user interface to the Microsoft or WPS Office ribbon interface.

If you are looking for something to install as a direct replacement for, say, a tired old Windows 7 installation, it's a reasonable choice… but despite its name, there are lighter-weight options than Linux Lite. ®