Want a Surface badge, but don't have Surface Laptop money? Step this way

Microsoft has updated its Surface Laptop Go, giving commercial customers the option of more RAM – but keeping quiet when it comes to Pluton. 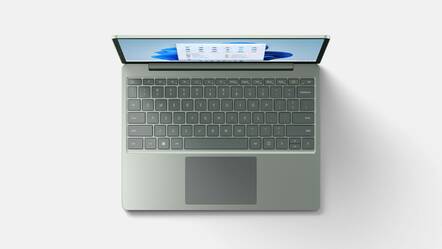 The original Go was introduced in 2020 as something for customers who fancied the Surface name, but lacked pockets deep enough to afford the full-fat Surface Laptop or one of Microsoft's detachable keyboard tablets.

It's still not the cheapest in the Surface line-up (that honor goes to the Surface Go 3, currently retailing from $399.99 without a keyboard), however. The refreshed Surface Laptop Go 2 starts at $599 for an 11th generation Intel CPU with a woeful 4GB of RAM and a 128GB SSD.

Spec-wise, in addition to the Intel Core i5-1135G7 processor, there is a 12.4" PixelSense 10-point multi-touch screen with a pleasing 3:2 aspect ratio. The 148ppi display (1,536 x 1,024) is pushed along by Intel Iris Xe graphics. The laptop weighs in at 2.48lbs (c 1kg) and the battery will last for 13.5 hours of what Microsoft calls "typical device usage." Your mileage may therefore vary significantly. The figure is ever so slightly up from the 13 hours of the first version.

As far as ports are concerned, there is are single USB-C and USB-A connectors, and a 3.5mm headphone jack. The inevitable Surface Connect port is also present.

The theme of repairability – or at least replaceability – that has been recently endorsed by Microsoft continues. The display, SSD, keyboard and trackpad are all customer replaceable units (although Microsoft warns that any damage that occurs during repair isn't covered by its warranty.)

The battery can also be swapped out, although the part is a field-replaceable unit and so needs either Microsoft or one of its Authorized Service Providers to do the job.

While The Register has not yet cracked open a Laptop Go 2, we'd be very surprised if the RAM is not firmly soldered in place.

Notably missing from the complement of hardware is Microsoft's Pluton security technology. Instead, both consumer and commercial versions of the Surface Laptop Go 2 must make do with more traditional TPM technology. Also missing from consumer versions is a 16GB option, ordinary users must stick with either 4GB or 8GB of RAM (and we'd recommend steering clear of the former.)

Still, at least the 64GB eMMC storage option has been dropped. The Surface Laptop Go 2 has only 128GB or 256GB removable SSD choices for storage.

For the CPU it remains Intel all the way for the time being, with Arm hardware still reserved for the Surface Pro X and Microsoft's upcoming Project Volterra. One also needs to venture elsewhere – such as the Surface Laptop 4 – for AMD silicon.

Overall, the refresh is relatively minor. There is a new color (if Sage is your thing) and Microsoft still insists on not including the fingerprint sensor on the power button for the base model (odd, considering how much the company bangs on about security), but, ultimately, the Surface Laptop Go 2 remains a well-built, "budget" laptop that still feels a little expensive and even underpowered compared to its rivals. ®

Laptops added or refreshed, and another go at making dual-screen phones a thing
Personal Tech23 Sep 2021 | 9