WWDC Apple opened its 33rd annual Worldwide Developer Conference on Monday with a preview of upcoming hardware and planned changes in its mobile, desktop, and wrist accessory operating systems.

The confab consists primarily of streamed video, as it did in 2020 and 2021, though there is a limited in-person component for the favored few. Apart from the preview of Apple's homegrown Arm-compatible M2 chip – coming next month in a redesigned MacBook Air and 13" MacBook Pro – there was not much meaningful innovation. The M2 Air has a full-size touch ID button, apparently.

Apple's software-oriented enhancements consist mainly of worthy but not particularly thrilling interface and workflow improvements, alongside a handful of useful APIs and personalization capabilities. Company video performers made no mention of Apple's anticipated AR/VR headset. 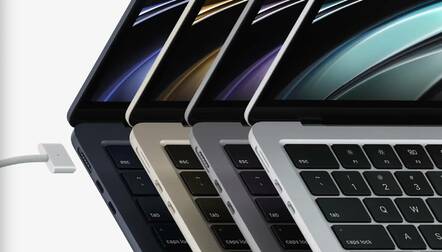 Apple CEO Tim Cook opened the keynote address with an overview of Apple's efforts to engage with, support, and educate the company's developer community, now numbered at 34 million people.

"Today, we're going to push our platforms further than ever for our developers and our users," said Cook. Imagine that.

Cook, after the obligatory review of accomplishments, summoned Craig Federighi, SVP of software engineering, to talk up iOS 16, the next iteration of Apple's mobile operating system, this one for iPhone 8 or later.

Federighi effused about the customizable Lock Screen available in iOS 16. It allows iPhone users to personalize their phone Lock Screen by making aesthetic changes though the selection of different backdrops, fonts, and colors.

"The new Lock Screen remains undeniably iPhone, while also giving you new ways to make it personal, beautiful and helpful than ever," said Federighi.

This has been tied into a technology introduced last year called Focus. Focus filters in iOS 16 can be applied to various apps, to filter data and reduce distractions. Thus, work Notifications or Widgets, for example, can be separated from personal ones on your Lock Screen. Focus filters can also hide email messages based on profiles.

Typo-makers rejoice: Apple's Messages app in iOS 16 will support editing of sent messages. Twitter still hasn't figured this out. Why this counts as novelty in 2022 isn't entirely clear.

Shared With You, for sharing content from Music, Apple TV, News, Photos, Podcasts, and Safari, is getting an API that third-party app developers can use for implementing content sharing. Dictation is getting an update so that it plays nicely with keyboard input pane interaction and adds punctuation appropriately.

Other forthcoming APIs include an App Intents API, to allow shortcuts to work across apps without setup, and a Live Text API, to interact with text detected in images and the Camera app. Expect developers to put these to good use.

Apple Wallet will allow the sharing of digital hotel keys, a capability to be available via standards for Android users, too, and will gain a capability called Apple Pay Later, to spread out a purchase via four zero-interest, zero-fee payments over six weeks. It will also support order tracking for merchants that choose to implement this feature.

Apple's Photos app, which can be found in all of Apple's operating systems, will soon be able to share photos with family via a shared iCloud Shared Library. Its Maps app is getting support for multi-stop routing and transit card fare payment integration with Wallet.

There's a new Safety Check tool intended for quickly and comprehensively disabling shared location data, passwords, and privacy permissions in apps in the event of domestic abuse or intimate partner violence, which is a noteworthy feature. The idea being that if you suspect an abusive partner is misusing your accounts or otherwise snooping on you, you can rapidly cut off all access.

The OS also has a feature dubbed Rapid Security Response that can install vulnerability patches as normal software updates without needing a full iOS update process.

Apple also touched on the next generation of CarPlay, which will be showing up in vehicles next year, and on industry adoption of Matter, an aspiring IoT connectivity standard based on HomeKit.

Apple's John Ternus, SVP of hardware engineering, and Johny Srouji, SVP of hardware technologies, outlined the latest iteration of Apple Silicon, M2, and the two devices the chip will appear in next month, MacBook Air ($1199+) and the 13" MacBook Pro ($1299+).

"We continue to have a relentless focus on power efficient performance, in other words, maximizing performance while minimizing power consumption," explained Srouji. "Combined with our unified memory architecture and custom technologies, this focus on power efficiency allows M2 to bring even more performance and capabilities to our most popular Macs. M2 is built using an enhanced second-generation five-nanometer technology and features over 20 billion transistors. That's 25 percent more than M1."

In terms of performance, the M2's CPU cores are said to be 18 percent faster than that of the M1, with a 35 percent more powerful GPU and 40 percent faster neural-network acceleration. The M2, we're told, is a system-on-chip with up to 24GB of RAM built in and 50 percent more memory bandwidth than the M1, totaling 100Gbps. We note that the M1 Pro chip from last year can take up to 32GB of RAM and the M1 Max 64GB; the M1 had up to 16GB.

Apple's macOS 13 will be called Ventura, in keeping with the iGiant's California-oriented naming theme. This won't run on any pre-2017 Mac, an indication of Apple's ongoing push to move away from x86 computers.

One of the major features of the upcoming desktop operating system release is called Stage Manager, for automatically organizing apps and windows into a single view to facilitate dragging files from one to another.

"When you're working on the Mac, it's really easy to find yourself with lots of open windows," explained Federighi. "Now the Mac has great tools like Mission Control, to help you find the window that you're looking for. But with so many open windows, it can feel like you've never really escaped all the clutter. With Stage Manager, you can focus on the app you're using without the distractions."

Anil Dash, CEO of Fog Creek Software, had a less charitable take, skewering the interface chaos that has dogged macOS for years. "From the people that brought you Exposé, and then LaunchPad and Mission Control to fix that, here comes Stage Manager, with just a click, you have the fifth way to get confused about where all your sh*t is on your Mac," he quipped via Twitter.

Other macOS 13 enhancements include improved search in Mail, as well as Undo Send and Schedule Send commands. Spotlight search will be better at finding images in Photos, Messages, Notes, the Finder, and the web, and will be able to utilize the Live Text API to find text in images. Safari is gaining support for Shared Tab Groups, so users can share browser tabs with one another – a feature sure to be explored by security researchers.

And it is implementing support for Passkeys, a new sign-in method that's end-to-end encrypted and intended to replace passwords by using things like fingerprint recognition.

There's also a feature called Accessory Security that causes macOS to ask the user if they're OK with USB and Thunderbolt accessories communicating with the OS. We're told this doesn’t apply to power adapters, displays, nor approved hubs, and it's designed to thwart malicious devices from being connected to a system without the user's permission.

Safari on iOS 16 is going to get opt-in web app push notifications. Ventura can also use an iPhone as a webcam in a feature called Continuity Camera. iPadOS 16 will come with a weather app.

Apple is also promising later this year to deliver group whiteboarding software called Free Form, "​​a productivity app where you and your collaborators can bring ideas to life." Better late than never to the tussle between Meet, Teams, and Zoom to win over remote workers.

Elsewhere, iPadOS and watchOS can look forward to further refinement, the former becoming more like macOS under a dictator. It adds improved external display support and app switching alongside many of the iOS improvements but still won't let users install software from outside the App Store.

Developer betas for these operating system updates should be available today, with public betas due next month. ®