Maps HTTP to QUIC to speed the web

The Internet Engineering Task Force on Monday published the RFC for HTTP/3, the third version of hypertext transport protocol.

As explained in an IETF summary:

The QUIC transport protocol has several features that are desirable in a transport for HTTP, such as stream multiplexing, per-stream flow control, and low-latency connection establishment. This document describes a mapping of HTTP semantics over QUIC. This document also identifies HTTP/2 features that are subsumed by QUIC and describes how HTTP/2 extensions can be ported to HTTP/3.

Let's unpack that a little.

QUIC stands for “Quick UDP Internet Connections” and was created by Google and revealed in 2013. Google developed QUIC to address the fact that Transport Control Protocol (TCP) needs a few back-and-forths to establish a connection and start moving data. It therefore produces long round-trip times which can translate into a poor user experience. QUIC instead uses the User Datagram Protocol (UDP) to carry traffic. UDP reduces the number of round trips between client and server, so speeds things up. This matters a lot on mobile networks, which when Google cooked up QUIC were slow and sparse. Mobile networks remain a very contested resource, so anything that speeds them up is welcome.

Google liked QUIC so much that in 2020 the ad giant baked it into its own Chrome browser and enabled it on its own services – a combo that in theory makes the experience of selling your digital soul to Google more pleasant (or at least involves fewer moments of delay and frustration than selling your soul to others).

Cloudflare implemented QUIC as an option in 2018.

Microsoft also liked QUIC so much it created its own version and open-sourced it. NGINX added HTTP/3 support.

But while QUIC's prevalence increased, much of the world's data traffic was still carried over HTTP/2, which relies on TCP. Slow, verbose, flaky, TCP.

So when networking boffins started to contemplate HTTP/3, way back in 2016, mapping it to QUIC made sense as a way to speed the web. But they also made sure HTTP/3 and HTTP/2 could co-exist.

The full RFC is over 20,000 words long and explains HTTP/3 in extraordinary detail.

HTTP/3 is already making waves. Cloudflare has revealed that its observations of the web suggest it is already the second-most-prevalent version of HTTP, but still a long way behind HTTP/2. 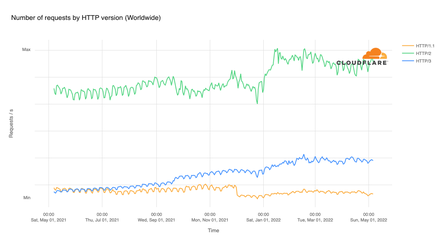 The HTTP/3 RFC is technically offered as a proposed standard, but it's pretty much done and dusted, and effectively signed off, which is no surprise given the web heavyweights backing it.

But HTTP/3 still has critics, and competitors. Apache has held off adding the protocol to its web server, arguing that its own HTTPD does a fine job. Privacy advocates continue to worry about QUIC, as do networking wonks who've found its promised speed boost is elusive. So HTTP/3 is not a panacea.

But the debut of RFC 9114 is nonetheless a big moment. As Cloudflare put it: "Today, a cluster of Internet standards were published that rationalize and modernize the definition of HTTP."

There are not many days on which such statements can be uttered. ®