Takes on global players with data sourced from customers, plus paid contributions from delivery drivers

Singapore's Uber equivalent, Grab, has decided to offer its homegrown maps as a service and asserts it will offer faster and more accurate spatial services than the likes of Google and HERE Technologies.

The move comes hot on the wheels of the company's revelations that Big Tech did such a poor job mapping Southeast Asia that Grab built its own maps to power its sprawling ride-share and delivery empire.

Grab's head of engineering Philipp Kandal said existing maps weren't sufficiently accurate and were not frequently updated enough. Lack of detail was another issue as they didn't include information on what happens after the "last mile," when a delivery driver has parked and is making their way through a shopping mall or condo block.

From 2017, Grab therefore started adding data to maps for the Asian nations in which it operates.

The company started the process by generating point-of-interest data so that its users – both drivers, which Grab refers to as "partners," and customers – could find each other.

Grab last week said it has now completely mapped seven out of eight of the countries it operates in and, according to Kandal, has mapped 90 percent of the eighth: Indonesia.

"It's been a gradual transition, it's not like a binary switch," Kandal said yesterday at a press conference.

Grab has decided the next logical step is to monetize its mapping effort, starting with licenses to use its 800,000km of base map data that shows places, roads and traffic, and imagery. The company will also offer a suite of AI-powered map making services described as an "end-to-end stack that enterprise companies can leverage to build their own apps."

In 2022 or 2023, the company said it plans to offer APIs and mobile software development kits (SDKs) so that developers can make their own applications and geolocation capabilities on GrabMaps.

"We've turned a problem that historically has been too nuanced for companies to solve into a strategic advantage," Kandal said.

Although Grab wouldn't name customers, Kandal said GrabMaps is being trialed by "several of the largest technology companies." The company also avoided revealing a cost, instead describing it as "competitive" and providing a "high-value service."

There's also no revenue target, although Grab said mapping and location services in Southeast Asia was a $1 billion per year market in which the company aims to be a significant player.

But what exactly are businesses being offered? Grab used open source OpenStreetMap (OSM) and to date is the largest contributor to the project in Southeast Asia. The Grab editing team is responsible for 20 percent of the region's edits.

Grab secured the data for those edits by asking the drivers to report on the best parking spots, the location of an elevator or a rerouted street.

"We've made crowdsourcing an income stream for our drivers. Our drivers that live and breathe in the community know why it's unique, and so we pay our drivers for these contributions, equip them with cameras. We now have tens of thousands of drivers doing this," said Kandal.

Grab has also commissioned its own cameras that it's made available for businesses in its commercialized map-making tools suite. Like AI-enabled GoPros, they strap onto a driver's helmet or vehicle – either solo or mounted on a car to capture a 360° view.

The company said the camera, called Kartacam, uses AI to blur out faces, license plates, and other sensitive information. 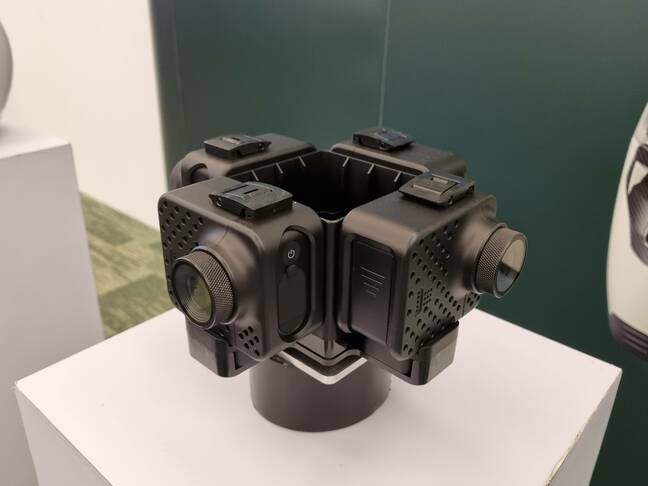 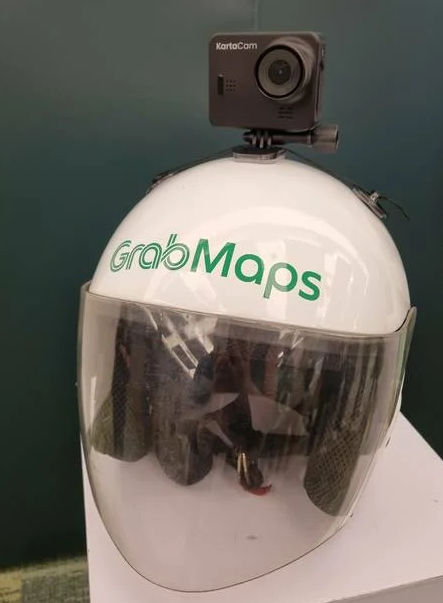 Grab's Kartacam and how it looks on a helmet

Grab wouldn't disclose the amount of pay the drivers receive for doing the data collection, but did tell The Register that location and uniqueness of data are factors in the fees it offers.

There are also drivers working passively, taking photos of places they run into for a little extra coinage, and those who are more active, taking on a project of sorts by collecting bigger chunks of data.

But every grab user is a contributor, willingly or not. "We take data from every single trip to improve," said Kandal, adding that Grab is currently receiving 500,000 GPS pings per second, or 2TB of data every day. That sounds like a lot, but in August 2021 the company reported it generated 40TB of data a day between customers, drivers, and other partners.

"We have done it in a different way than typically done in the map making industry – every day our merchants, drivers, and consumers contribute to make it better," Kandal said.

In 2016, the superapp – along with cab companies Easy taxi and Le.Taxi – worked with the World Bank in the Philippines, with support from the Korea Green Growth Trust Fund, to make traffic data derived from its drivers' GPS streams open to the world under an open data license. That project originally had support from Mapzen, the open source mapping platform adopted as a Linux Foundation project in 2019.

Grab reported a net loss of over $1 billion in Q4 2021 after suffering a disappointing debut on the NASDAQ stock exchange in late 2021. After the underwhelming IPO, CEO Anthony Tan vowed to improve its mapping capabilities as one way to improve performance. ®