Analysis For all the pomp and circumstance surrounding Apple's move to homegrown silicon for Macs, the tech giant has admitted that the new M2 chip isn't quite the slam dunk that its predecessor was when compared to the latest from Apple's former CPU supplier, Intel.

During its WWDC 2022 keynote Monday, Apple focused its high-level sales pitch for the M2 on claims that the chip is much more power efficient than Intel's latest laptop CPUs. But while doing so, the iPhone maker admitted that Intel has it beat, at least for now, when it comes to CPU performance.

Apple laid this out clearly during the presentation when Johny Srouji, Apple's senior vice president of hardware technologies, said the M2's eight-core CPU will provide 87 percent of the peak performance of Intel's 12-core Core i7-1260P while using just a quarter of the rival chip's power. 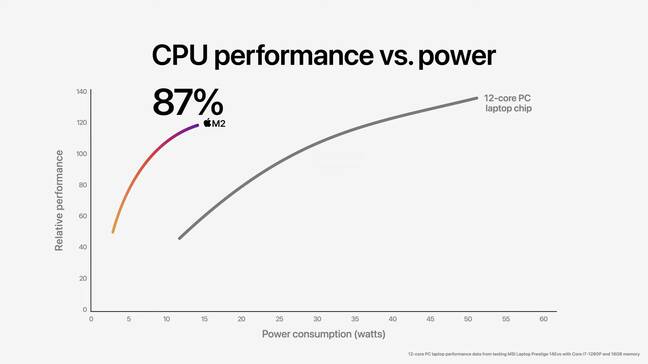 A concession by Apple on CPU performance, but the M2 is much more power efficient. Click to enlarge.

In other words, Intel's Core i7-1260P is nearly 15 percent faster than Apple's M2, and that's not even considering the fact that Intel has two more powerful i7s in its so-called P-series lineup: the higher-frequency i7-1270P, which has same number of cores, and the 14-core i7-1280P.

The company did claim that the M2's CPU is 1.9x faster than Intel's 10-core Core i7-1255U while using the same amount of power, but while this may be a more appropriate comparison, the fact is that Apple doesn't have a CPU for ultra-thin laptops that is as powerful as Intel's best.

Regardless, Apple is claiming that performance-per-watt, where the M2 really shines, is the more important metric, building upon the original argument it made when the M1 debuted in 2020.

"Unlike others in the industry who significantly increase power to gain performance, our approach is different. We continue to have a relentless focus on power efficient performance. In other words, maximizing performance while minimizing power consumption," Srouji said.

But performance-per-watt isn't the only way Apple hopes the M2 will stand out when it lands in the MacBook Air and 13" MacBook Pro next month.

The tech giant is also making a bigger bet on the chip's GPU and neural engine because it believes an increasing share of applications in the future will be rely on graphics and AI, according to veteran semiconductor analyst Kevin Krewell of Tirias Research. 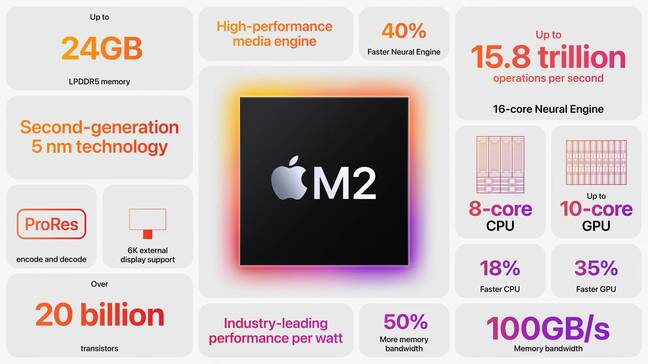 The M2 is still an impressive chip overall, especially its GPU and neural engine. Click to enlarge.

This is reflected by Apple's decision to dedicate more transistors for the M2's 10-core GPU and 16-core neural engine compared to the M1, Krewell said. These design decisions allowed the Mac maker to claim a 35 percent boost for the GPU and 40 percent boost for the neural engine compared to the M1. On the other hand, the M2's CPU only improved by 18 percent in multi-threaded performance, according to Apple.

But even then, Krewell said, applications that are heavily reliant on the CPU, like web browsers, don't have as great a need for faster chips, which is why he believes it's important to put more weight on the GPU and neural engine since they could make a bigger difference.

"Web browsers don't need a whole lot more performance, so the comparison on industry performance is probably less relevant in my mind, though overall power efficiency is good. Apple wants to show they are competitive with Intel and that in some ways they may be ahead with neural processing and better graphics," Krewell told The Register. 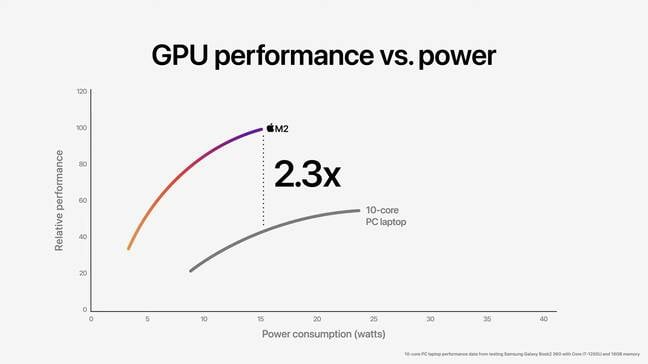 The M2's GPU is looking pretty good — if you believe Apple's claims. Click to enlarge.

While Apple didn't provide a competitive comparison for the M2's neural engine, it did claim that the 10-core GPU is 2.3x faster than the integrated graphics within Intel's Core i7-1255U while using the same power. Conversely, Apple said the M2's GPU can provide the peak performance of the i7-1255U while using only one-fifth of the power. The caveat is that Apple didn't provide a comparison to the i7-1260P, which does have a faster built-in GPU than the i7-1255U.

By its own admission, Apple may not have the fastest CPU in the industry for an ultra-light laptop. But its bigger emphasis on the GPU and neural engine lends to the growing trend in the compute world that having a faster central brain may be less important than having dedicated accelerators for increasingly important areas like AI and graphics. ®