Don’t cross the streams! Why? It would be bad. What do you mean 'bad'?

Something for the Weekend Which do you prefer: sweat or green slime? Both are being touted as clean sources of energy to drive electronic devices.

Hmm. “Clean” is not how my sweat has heretofore been described, least of all the morning after a garlic curry. But even my pit-pong pales into paucity compared with the environmental damage inflicted by a nuclear power station. And for all my lack of wattage, I positively glow in outrageously self-obsessed smugness. I must let my LinkedIn followers know.

Still, green slime – aka "blue green algae" – has its advantages over sweat. It is more plentiful for a start. Which would be the better option for powering small computers? It’s literally a power struggle between the two. And there is only so much sweat I can produce per day (despite Mme D’s observations to the contrary).

Back in January, boffins at the University of Cambridge’s Biochemistry department published a paper reporting that they had successfully powered a microprocessor continuously for more than six months with a combination of algae, water and ambient light. It is now (checks watch) June and apparently it is still running. That’s a year of operation powered by nothing but green slime.

The sludgy little beasties in question are synechocystis, a non-toxic blue-green genus of cyanobacteria that produces a tiny electric current during natural photosynthesis.

To be clear, the microprocessor in question is an Arm Cortex M0+ as used in various little IoT devices – so hardly a battery drainer. But the self-generating sludge battery that has been charging it for the past year is pretty small too – about the size of an AA battery. It looks like this: 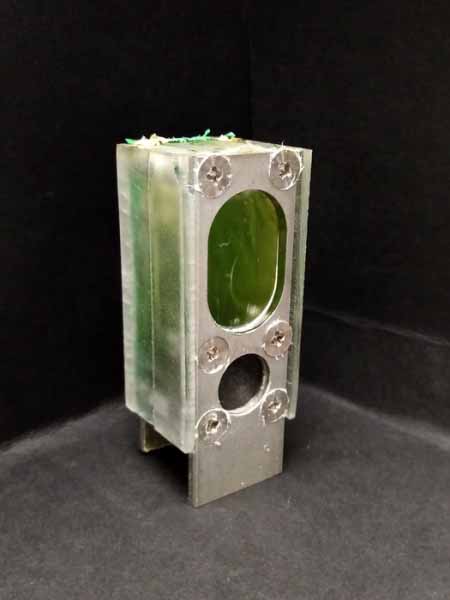 While this was going on, engineers at MIT and the Technical University of Munich were hard at work developing an ultra-thin (400nm) ceramic fuel cell that converts glucose directly into electricity, generating about 43 microwatts per square centimeter. Its size and format makes it ideal for medical implants, and the team is working on ways to harvest the necessary glucose directly from the patient’s own body.

So what about my claim about turning sweat into electricity? Boffins at UC San Diego claimed in July last year they've designed a way to allow sweaty hands to charge a device. It's not commercially available.

It’s only a matter of time before someone is able to prove Edison’s catchphrase about 1 percent inspiration and 99 percent perspiration. After all, you can already get wearable alcohol biosensors that measure the ethanol excreted through your skin.

I also reckon sweat would be a cleaner source of energy than an algae battery, and quite a bit safer than a nuclear power station. It’s all relative, of course. If a nuclear power station suffers a leak, we’re all dead. If an algae battery should ever leak, the worst that could happen is that your autonomous vacuum cleaner smells a bit like sushi. But if my armpits leak a bit, it’s not as if it’s particularly toxic to the environment (again, despite Mme D’s observations to the contrary).

The intriguing aspect of some of these projects is that they purport an energy source that is somehow perpetual. You start them up and they just keep going indefinitely, or at least until the algae get bored or the bio-implant patient stops producing glucose by inconsiderately popping their clogs.

Fair enough, nobody is claiming they can produce perpetual energy from nothing. All that’s happening is that some energy that would otherwise be lost back into nature is being siphoned off. Photovoltaic panels do this too, in principle: they don’t suck sunlight out of the sun, do they? They just nab some of the daylight that the sun carelessly drops in our direction and is just going to waste.

And yet spooky physics is very much back in fashion.

Look at the immense amount of money and brain power being invested into quantum computing – a computer concept that makes no sense whatsoever outside a 1950s pulp sci-fi novel by L Ron Hubbard. Every time I try to explain what a quantum computer is to an acquaintance outside our industry, I get one of those out-of-body experiences in which I can hear myself talking a load of impossibility bollocks.

The reaction of my listener is usually along the lines of “WTF?!” This is good sign: it means I have probably explained it accurately. Quantum computing is scary shit and the fact that Exeter-headed brainiacs confirm that it’s real makes it even scarier. If you reckon you have grasped even the faintest concept of quantum computing and you go on to enjoy a peaceful night’s sleep, then quite clearly you haven’t.

Now I read that scientists have not just bent the laws of physics even further, they have knitted a scarf out of them and taken them out for dinner for good measure. Researchers at the University of Lancaster’s Physics department, Royal Holloway London, Landau Institute and Aalto University in Helsinki cooled superfluid helium-3 to almost -273.15°C inside a rotating refrigerator, created two "time crystals" (which are impossible) and brought them into touch (which is impossible).

As lead author of the paper, Dr Samuli Autti, puts it: “In quantum physics perpetual motion is OK as long as we keep our eyes closed. … It turns out putting two [time crystals] together works beautifully, even if time crystals should not exist in the first place.”

And this is what will be running our supercomputers in the future? Who needs an uninterruptible power supply when your computer runs on crystals that are in constant, repeating motion in time despite no external input?

Even fusion energy is making a comeback, despite being all the rage 50 years ago and yet leading to the development of precisely no fusion power stations whatsoever during the 50 years that followed.

The UK Atomic Energy Authority and the Science and Technology Facilities Council’s Hartree Centre have put AI on the case to design viable fusion energy technologies virtually, and they reckon the signs are good.

There are three big challenges with fusing atoms to release energy and getting me to believe it. First, the claims are outrageous: supposedly 4 million times more efficient at generating energy than burning fossil fuels. Second, it sounds too good to be true: no greenhouse gases, no long-term radioactive waste, virtually unlimited source material.

Third – and this has been the real bugger to date – to fuse isotopes of seawater hydrogen together, you have to reproduce the same temperature and intense gravitational forces as those found on the sun. You’re going to need more than a centrifuge and a Bunsen burner.

Virtually unlimited? I’m no physicist but the energy has to be coming from somewhere.

What I reckon is that all our woo-woo technologies will actually be leaking the fun from other dimensions. In fact, I’m pretty sure the boffins from those other dimensions are sucking energy out of our computers in order to run theirs. It would explain all the crashes, freezes and temporary hangs. Every time my PC falls over or my phone handset spontaneously restarts, an egg-head in Dimension 37892Q7 thinks they have discovered free energy.

Or I may just lack the mental capacity to take it all in. Just in case, I think I’ll fill the bath with pond water and use it to recharge my laptop. Oh, and to make sure the brave new future of free energy works, for heck’s sake don’t look at my socks.

Alistair Dabbs is a freelance technology tart, juggling tech journalism, training and digital publishing. He worries that electronic devices are fragile enough already without running them on fairy dust and pond life. He is also delaying the purchase of an electric vehicle until he has read the detailed treatise on EVs recently published by that bastion of scientific enquiry, Charlie Hebdo. More at Autosave is for Wimps and @alidabbs.