Curious about the history of home computing both west and east of the iron curtain? Berlin's ComputerSpieleMuseum in Germany's capital has you covered.

Museum director Matthias Oborski was The Register's guide around the ground floor site of the museum, which is located among the Soviet buildings of Berlin's Karl-Marx-Allee (a five-minute metro ride from Alexanderplatz, or 25-minute walk if you want to take in the brutalist architecture).

After the reception, with its impressive Soviet-era mosaic still in-situ behind the cheerful staff, there is a temporary exhibition celebrating the role of food in computer games. Oborski winced a little at the word "temporary" – it had been set up in 2019 and was still in place due, mainly, to the events of the last few years. 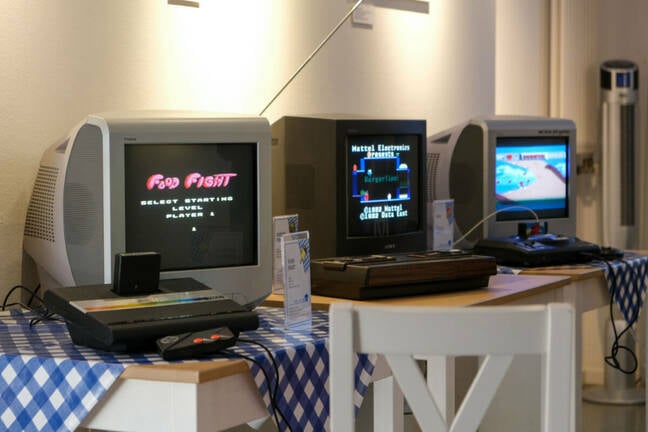 Get past that and one is into the museum proper, starting with games of the pre-computer age (such as chess played by post) before moving onto very early examples of gaming in the big iron of the mid-20th century.

Nestled among the blocks of information is a recreation of the Nimrod, from 1951, designed to play a game of Nim. Sadly, the vacuum-tubed original is not up and running; instead, a representation on a FPGA does the business and, of course, your writer managed to lose on his first attempt (despite hints and tips from Oborski).

Unlike the UK's Centre for Computing History and National Museum of Computing, the ComputerSpieleMuseum is, as its name suggests, all about games. 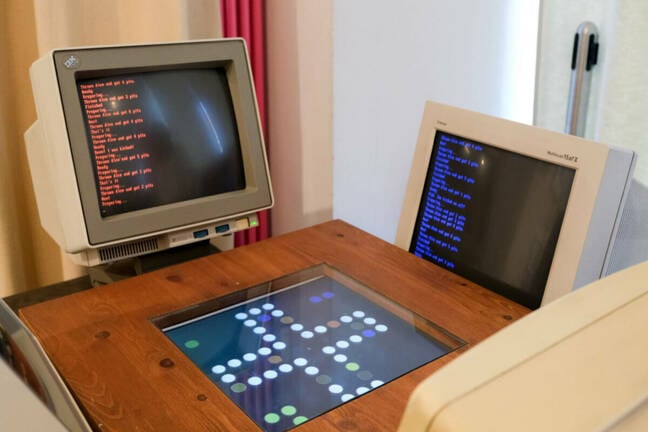 Eternal loop: Computers play Ludo against each other

Another recreation, Spacewar!, lurked just around the corner. While the PDP-1 of the original was only present in pictorial form, the emulation was more than sufficient to give a viewer the feel of the game and the amazement it must have caused some 60 years ago.

The ComputerSpieleMuseum is a mix of interactive games and presentations controlled by a joystick. Oborski explained the approach, saying: "If everything is interactive then it's overkill; you can't really concentrate.

"And we have so many different types of people coming into this museum. Many people, especially Germans, but also other Europeans, if they see the word 'museum', they expect something non-interactive or somewhat interactive.

"And because people, especially elderly people, are somewhat afraid to play because they don't know what's going on, [they're worried] they might break the stuff. Which happens all the time anyway," he added.

As we can attest, it can be a little humiliating being trounced by a child with considerably greater gaming prowess.

The Reg was particularly taken with a wall of history, documenting milestones in gaming. We did, however, take issue with the choice of Sega's Afterburner over something like Outrun and Doom. Oborski referred to the timeline as the "Argument Wall", and we can certainly imagine it triggering some spirited playground-style disagreements. Still, at least Elite was present and correct.

And then there is the PainStation (or "the artwork formerly known as PainStation" if certain lawyers are getting itchy palms).

Originally an art installation, the PainStation is ostensibly a two-player game based on Pong. A ball bounces between bats controlled by players each with one hand on a dial to move the bat and another on a worrying-looking pad. Lose, and there is every chance the game will dispense an electric shock, a bit of heat or a thwack to the back of one's hand with a whip. Snatch away your hand and you lose. Stick with it, and the levels of punishment can ramp up as a losing streak continues. 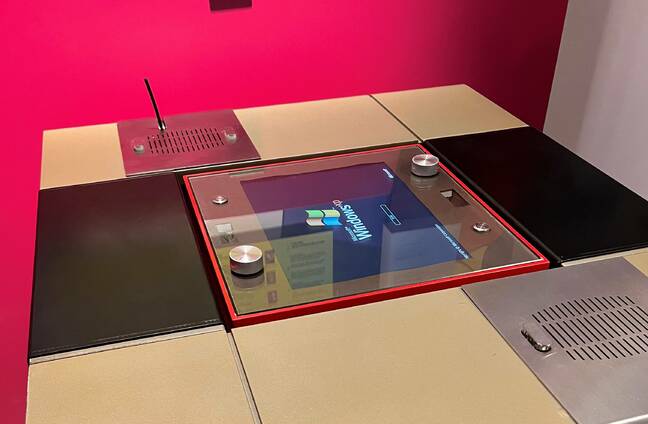 This writer didn't even make it past the first round after yelping like a small child and pulling back a hand after some characteristically incompetent gameplay resulted in a shock.

A word of warning. The PainStation requires supervision by a member of museum staff. "Some people can't stop," explained Oborski, "and it can get quite dangerous. People have started bleeding and stuff... We try to avoid that."

To be fair, just seeing that Windows XP splashscreen is enough to trigger a nosebleed for administrators tasked with keeping the OS running during its heyday.

Away from the PainStation, the museum is packed with artifacts and tableaux. There is a playable GDR video game consisting of a domestic television shoved into a handmade wooden cabinet along with some dusty electronics below, interactive exhibits such as an Atari VCS for the 1970s, a PlayStation lurking for the 1990s theme, and a recreation of a 1980s arcade replete with playable machines.

Our visit ended at a wall of elderly computers and consoles placed securely behind perspex, as they are due to be given a touchscreen at some point this year. And Oborski highlighted several areas, including the East and West German computing corner, due for a refresh during 2022.

If one has an hour or so to kill in Berlin, we'd have to recommend a visit. Both to bathe in nostalgia and to learn a little more about the history of gaming with a uniquely German twist. Entrance is €9 (approx $9.42, although concessions are on offer), and slots can be booked on the museum's website.

We fully intend to return in 2023 to see how many of Oborski's plans come to fruition. ®