In truth, a non-tape media player for Gen Xers with more money than sense

What's old is new again with reboots of classic devices for gaming and music coming out all the time. But that kitsch value comes at a cost, even if the tech is from the current era.

Audiophiles want digital music players that leave out cellular components in favor of sound-quality-maximizing gadgets – or at least that's what Sony appears to be betting on with the introduction of a $3,700 so-called Walkman this week.

Before you ask, no it can't play actual tapes, which means it's not really a Walkman at all but rather an Android 11 media player that can stream and play downloaded music via apps, much like your smartphone can probably do. But we won't talk about that because gold plating.

The market demand for this remains unclear, especially following the death of the iPod, Sony's latest gold-plated Walkman has a bunch of features the Japanese tech maker claims improve the sound quality, such as a chassis made from oxygen-free copper that lives under the gold plating.

This is a step up from the $3,200 model touted in March this year, and has been available in some form for years. A "budget" version of the latest device also sheds some of the more esoteric sound-quality-enhancing hardware, but is still priced at $1,400. 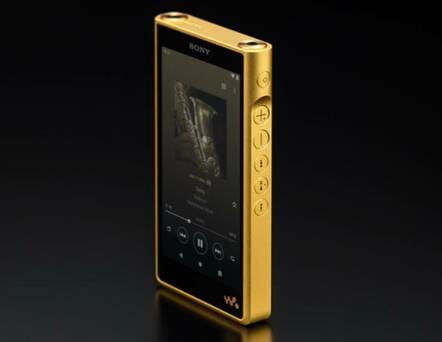 Both of the latest Walkman models are Wi-Fi only, and can play streamed and downloaded music, including files in MP3, FLAC, AAC and other formats. The storage is modest: the full-priced model comes with 256GB (215GB actually usable), while the budget version ships with 128GB. Both do have SD expansion slots, however. There is a standard headphone stereo mini jack, and USB-C seemingly for charging.

The launch of these devices, with features sure to ignite a debate on how much quality can be extracted from audio files, comes at an inopportune time for digital music players. The aforementioned end of the iPod line, and Apple's message telling consumers to switch to an iPhone, is only another symptom of a change in listening tastes that eschews media ownership altogether.

Consider Ikea's decision to start manufacturing and selling its own record turntables – it's a sign that some people's tastes in music listening are changing. Vinyl records are making a comeback as the most popular format to buy and own music, which includes digital online purchases.

That said, physical media sales are still dwarfed by online streaming services. Vinyl, which accounted for more than half of music purchases, only accounts for 4.7 percent when including streaming.

In early 2021, Spotify announced plans to add lossless-quality audio to its platform, which Apple and Amazon Music copied a few months later. Lossless audio circumvents one of the central drawbacks of music streaming, provided one has a fast enough cellular data or Wi-Fi connection, which again raises the question of whether digital music players are well and truly ready to be put out to pasture.

When Ikea reintroduced turntables it acted on a trend in listening to music: the reemergence of physical media among collectors and audiophiles. What Sony is hoping to accomplish with a nearly $4,000 Android Wi-Fi-only phone is less clear. ®