Tombstones, memes, Clippy, and probably a cat or two. The web pays its respects

Internet Explorer breathed its last for many users this week, and netizens have observed its passing in their own special way.

One joker chose to celebrate the passing of the former web bigwig with a tombstone where one could go and pay homage to the malign influence exerted by the browser.

Someone built a real tombstone of Internet Explorer in Korea. "He was a good tool to download other browsers." https://t.co/42vnkoQshd pic.twitter.com/ud3SMiyLNp

Others, such as actor and gin slinger Ryan Reynolds, tweeted the hashtag #BringBackInternetExplorer. No. Please no.

Lonesome Dove:The Outlaw Years was one of my first jobs back in 1995. It’s been a crazy 27 years and I can’t imagine doing it without you, Internet Explorer. The show didn’t deserve another season but you sure did…#BringBackInternetExplorer @microsoft pic.twitter.com/7rE7LM9FA9

Reynolds does, however, play the Deadpool character that is notable for his ability to not die. The same could be said for Internet Explorer, which will live on both in the long-term servicing version of Windows as well as bits of the core operating system that Microsoft dare not poke too hard.

The Deadpool sequel was Deadpool 2. Internet Explorer's was Edge and, frankly, the less said about that the better. Microsoft has, after all, also had a go at killing that off as well. Edge is dead, long live Chromium Edge and all that.

The meme machine worked overtime for Internet Explorer's farewell, and there was a reminder of the browser's greatest hits (or most common message) on many a social media stream.

Microsoft's Edge team chimed in, although to our eyes that beige box looks for all the world like an Amiga 1000, discontinued long before Internet Explorer troubled the desktop. PCs of similar design emerged over the years, but it can't be... can it? 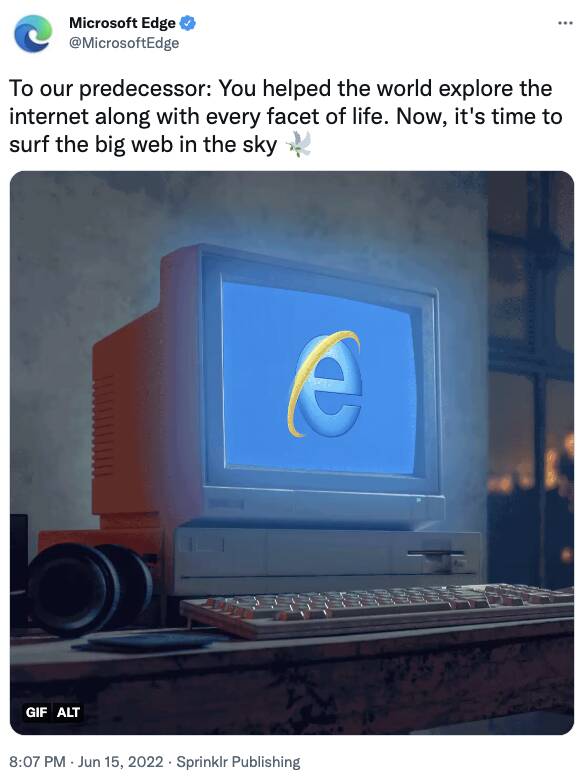 Overall, the death of Internet Explorer was mourned as one might mark the end of an era without really remembering all the lows to accompany the highs. Engineers forced to work around the browser's many, many foibles were doubtless dancing on its grave even if in recent years the vast majority of users only ever fired it up for one thing:

Today marks the official end of Microsoft’s support for Internet Explorer. RIP to the #1 Chrome installer of all time

And even that one remaining duty was taken over by Edge in recent years. No flowers. ®