New versions of both desktops drop... with one the oldest FOSS 'top around

Right after the latest release of the KDE Frameworks comes the Plasma Desktop 5.25 plus the default desktop for the forthcoming Linux Mint 23. 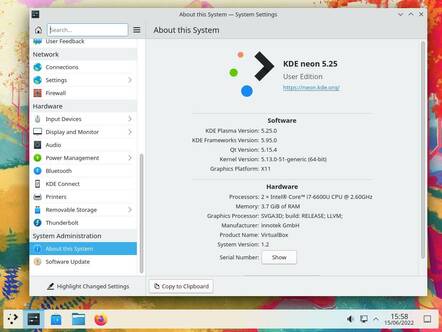 Plasma 5.25 has a funky new floating taskbar option, very much like the one in the Deepin Desktop

KDE Plasma 5.25 is the latest version of the oldest FOSS desktop around, with new and improved features that will particularly benefit trackpad and touchscreen users and people with convertible laptops.

It appears right after version 5.95 of the KDE Frameworks, but to be honest, this won't be especially visible unless you're a developer. The KDE organization itself describes the Frameworks as "a set of 83 add-on libraries for programming with Qt."

The latest version includes bugfixes and fresh features, but new releases appear monthly so it's not a dramatic list of changes.

This allows version 25 of Plasma 5 to be slightly more experimental. Many of the new features involve multi-finger gesture support, which will be very welcome if you use a trackpad or other multi-touch input device (as opposed to a mouse, trackball or trackpoint.)

One set of gestures uses four fingers: a pinch activates the overview screen, a swipe upwards takes you to the overview of all virtual desktops (which KDE calls the "desktop grid"), and a four-finger swipe downwards tiles miniature versions of all the windows on the current desktop (which KDE calls "Present Windows", and to us looks like the original Mac OS X Exposé feature.) Meanwhile, three-finger swipes up, down, left or right switch between virtual desktops.

Similarly, if you have a touchscreen, you can configure these four-finger actions to be triggered when you swipe in from the edges of the screen. Plasma 5.25 can also transition smoothly between trackpad and touchscreen operation on convertible laptops. There are demonstration videos of all these effects in the Plasma 5.25 announcement.

Regular readers may have by now worked out that your correspondent is a grumpy old git, and as such, next to his extremely loud early-1990s mechanical keyboard sits a very basic three-button mouse, and not a single PC he owns has a touchscreen, rendering him unable to try any of these exciting features.

Saying that, he does have friends who manipulate their Macbooks thusly using gestures, in ways bewildering and baffling to this jaded old hack. It's genuinely very good to see a Linux desktop engaging with the new input functionality of modern hardware, especially since Ubuntu killed off its touch-driven efforts years ago.

Older Microsoft Surface fondleslabs and… MacBooks Air, or MacsBook Airs, or MacBook Airs, whatever they might be called, either struggle with more recent OS releases or aren't supported at all. As always, Linux gives old kit a further lease of life, and with Plasma 5.25, owners will be able to control them with flicks and taps and other mystic mudras.

There's also a new version, 5.4, of Linux Mint's Cinnamon desktop. It's nearly a year since Cinnamon 5.0 appeared as part of Mint 20.2, and 5.2 debuted with Mint 20.3. Cinnamon 5.4 will be the default desktop in the forthcoming Linux Mint 21 "Vanessa", based on Ubuntu 22.04. For now, version 5.4 is only some source code on GitHub, but it will start to appear in rolling release distros very soon.

The upgrade to version 5.4 is partly to keep up with the changing basis of the GNOME environment from which it forked.

Version 5.4 has better multi-monitor support, including the ability to change which is the primary screen of a multi-head machine. Keyboard navigation has also been improved, as has the volume control applet, the terminal emulator and other components.

The Reg FOSS desk will take a more in-depth look at the new desktop when Mint 21 appears, which is expected to be in the next few weeks. ®