GNOM is small, but packs a mighty 7.62mm punch

The latest drone headed to Ukraine's front lines isn't getting there by air. This one powers over rough terrain, armed with a 7.62mm tank machine gun.

The GNOM (pronounced gnome), designed and built by a company called Temerland, based in Zaporizhzhia, won't be going far either. Next week it's scheduled to begin combat trials in its home city, which sits in southeastern Ukraine and has faced periods of rocket attacks and more since the beginning of the war.

Measuring just under two feet in length, a couple inches less in width (57cm L х 60cm W x 38cm H), and weighing around 110lbs (50kg), GNOM is small like its namesake. It's also designed to operate quietly, with an all-electric motor that drives its 4x4 wheels. This particular model forgoes stealth in favor of a machine gun, but Temerland said it's quiet enough to "conduct covert surveillance using a circular survey camera on a telescopic mast." 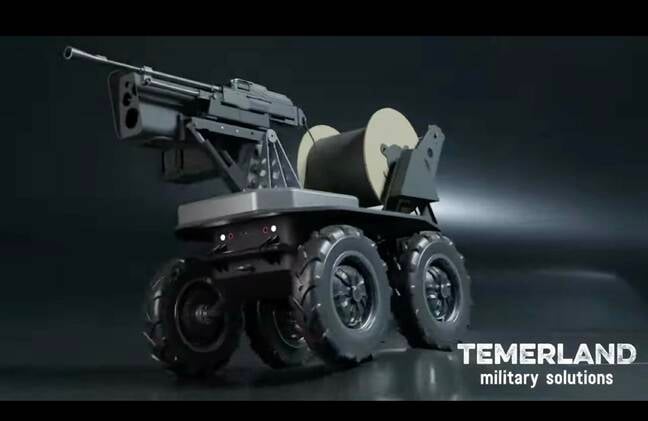 GNOM is also trying to get around the problem of both Russia and Ukraine using radio jammers to knock aerial drones out of the sky, an issue that Forbes said has been growing as lines of battle stabilize. In lieu of radio control, GNOM opts for a roughly 5km spool of fiber-optic cable to get signals from its operators. If the cable is severed, GNOM is programmed to return to a set of GPS coordinates for pickup.

Aerial drones are everywhere in warfare, but ground-based remote vehicles haven't developed alongside them. There's plenty of reasons why – offroad travel difficulties being only one of them. Other common misgivings that sidelined ground-based combat drones  include arming them, the safety of soldiers operating with them, and their efficacy. While taking various forms, those concerns remain today.

In addition to being able to hold an automatic gun, GNOM can also be outfitted to remotely move and detonate anti-tank mines. Non-combat military support applications include acting as a satellite for larger robotics platforms, serving as a radio repeater, delivering equipment and supplies, and evacuating wounded.

Forbes said Ukraine has other remote systems, but GNOM will be the first uncrewed ground vehicle to take the field. Reports suggest that Russia has also deployed its own UGV, the Uran-6, which is used to disarm mines. ®

Black Hat The inside scoop on the Ukrainian IT army, and what could happen next
Security11 Aug 2022 | 25