RISC OS, the operating system of the original Arm computer, the Acorn Archimedes, is still very much alive – and doing relatively well for its age.

In June 1987, Acorn launched the Archimedes A305 and A310, starting at £800 ($982) and running a new operating system called Arthur. At the time, it was a radical and very fast computer. In his review [PDF] for Personal Computer World, Dick Pountain memorably said: "It loads huge programs with a faint burping noise, in the time it takes to blink an eye."

Arthur was loosely related to Acorn's earlier MOS, the BBC Micro operating system but looked very different thanks to a prototype graphical desktop, implemented in BBC BASIC, that could charitably be called "technicolor."

RISC OS has had a rather convoluted history, partly due to Acorn spinning out Arm, eventually pulling out of the computer market, rebranding as Element 14 and being acquired by Broadcom, where Arm co-designer Sophie Wilson still works today. And partly due to drama over the ownership of the OS post-Acorn at one point.

The other branch, designed for the 32-bit mode of more recent Arm chips, is now owned by RISC OS Developments, which made it fully open source back in 2018. Development and maintenance is done by the team at RISC OS Open Ltd – ROOL for short – which offers downloads for a variety of current Arm hardware, such as the Titanium desktops. 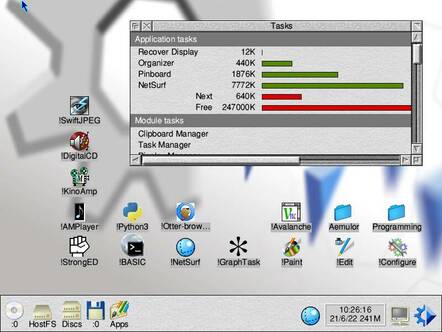 If you don't have suitable kit but fancy playing with 21st-century RISC OS, there's also a FOSS emulator called RPCemu, which can run modern versions.

Meanwhile, RISC OS Developments offers a special Raspberry Pi distribution called RISC OS Direct, which runs on all versions of the Raspberry Pi (except the Pico). It's based on ROOL's latest stable version, 5.28, plus various extra apps.

RISC OS Developments are still working on new functionality for the OS. Notably, it recently released a new TCP/IP stack, derived from OpenBSD. Right now, the main benefit is IPv6 support. A feature more significant to most users is still in development: Wi-Fi support.

Also still under development, but available to paid backers, is a new RISC OS web browser, Iris. RISC OS does come with a choice of browsers – NetSurf and Otter – but the plan is that the new Iris browser will be a native app, with the RISC OS look and feel, but using the WebKit engine for better compatibility with the modern web.

The main remaining limitation is SMP. As an OS from the 1980s, long before the 21st-century technology of mainstream multicore processors, RISC OS practically only supports a single CPU core. Various experimental efforts are under way to address this. One has got NetBSD running on another core, and another has the experimental Genode OS running alongside RISC OS. Another effort is working on adding SMP support into the RISC OS kernel itself.

The only other OS that The Reg FOSS desk can think of from this era that's still around, actively maintained, and runs on modern hardware is NeXTstep – or, as Apple calls it today, macOS. Amusingly enough, the latest versions also run on Arm kit, in the form of the Apple Silicon Macs. ®