And perhaps too heavy, which is a weighty issue for a machine that turns into a tablet

Desktop Tourism My 20-year-old son is an aspiring athlete who spends a lot of time in the gym and thinks nothing of lifting 100 kilograms in various directions. So I was a little surprised when I handed him Microsoft’s Surface Laptop Studio and he declared it uncomfortably heavy.

At 1.8kg it's certainly not among today's lighter laptops. That matters, because the device's big design selling point is a split along the rear of its screen that lets it sit at an angle that covers the keyboard and places its touch-sensitive surface in a comfortable position for prodding with a pen. The screen can also fold completely flat to allow the laptop to serve as a tablet.

Below is a .GIF to show that all in action.

The hinges that make the above possible swing wonderfully well and the laptop – which was announced in September – clicks into each position nicely … on the way down. It's less easy to put the screen back into clamshell configuration after using it in tablet mode.

Doing so exposes one of the machine's worst features: a multitude of sharp edges that make it hard to physically grasp.

Most laptops use a tapered, wedge-like shape with rounded edges where it matters: where one rests one's wrists. The Surface Laptop Studio instead cuts away almost immediately, leaving the base looking like a sharp-edged rectangular block with a keyboard sat on top. Microsoft has done this to accommodate a magnetic contact along the side that holds and charges the Surface Pen it offers for pen-based input, and maybe to accommodate the machine's vents. Microsoft didn't provide me with a pen so I couldn't test if that works well.

But I did use the machine for other duties and did not enjoy the experience because its two sets of edges have not been gently rounded. Instead they're crisp enough that I found the top one cut into my wrists when typing. Handling the machine is uncomfortable and a little fraught. Combined with its weight, it just isn't natural to consider using it as a tablet.

It's as if Microsoft has at some point forgotten that laptops – and this one in particular – are made to be handled. Between the weight and the sharp edges, it is hard to recommend this machine to anyone for its intended purpose of hands-on content creation. Especially if you do not want your wrists cut into. 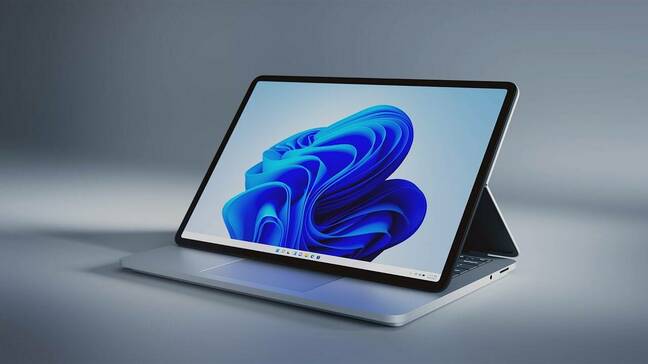 Windows 11 doesn't help. It's nicely unobtrusive in desktop mode but has dropped Windows 10's meek tablet mode. The notion that desktop-sized icons designed for use with a mouse translate to touch-screens for prodding with fingers is bafflingly counterintuitive.

Battery life of a modest four and one quarter hours through my normal use was the final nail in the coffin.

The laptop offers other annoyances, which start as soon as you turn it on. The camera is not very good at facilitating Microsoft's preferred facial biometric for logins. I found I needed to be within 30cm of the camera to make it work reliably for authentication – an inconvenience when I set the machine to one side and connected it to an external monitor.

The absence of a USB-A slot is regrettable, because it means the machine ignores users' existing peripherals and for many will force the purchase of a USB-C dongle. My two such dongles – which have done years of loyal and uninterrupted duty – proved unreliable when using this device.

None of my previous Desktop Tourism adventures produced the same instability in the cheap and cheerful USB-C dongles I buy from Amazon.

Desktop tourism? PCs and alternative devices have increasingly diversified into myriad and marvelous forms, so I've decided that in 2022 I'll use a different one each month and share the experience. This article is the latest part in this series of mini-reviews.

Microsoft persists in offering its own fin-like power connector – an option I've found frustratingly easy to knock out accidentally on previous Surface devices. Thankfully both USB-C slots can accept power input, so you won't be tied to Microsoft power packs. I found myself appreciating that the Surface charger's magnetic coupling could one day save the laptop, but I also adore the ubiquity of USB-C charging. Microsoft's probably got the balance right by offering both – and perhaps showed up USB-C as more likely to lead to a laptop's untimely demise.

I ran my usual semi-torturous test – downscaling a five-minute 4K video to 1080p using Handbrake – and the machine did the job in 4 minutes, 29 seconds. In an Ubuntu virtual machine under VMware Workstation Pro, again using Handbrake, the job took 12 minutes and eleven seconds.

Those times compare favorably to the Core i9-powered ASUS machine that kicked off the Desktop Tourism adventure and reflect the fact this laptop performs very nicely – if you don't want to carry or draw on it.

The 2400x1600, 14.4-inch screen renders colors with pleasing precision. The camera turns on quickly and handles low light well. I enjoyed the speakers and found the keyboard was not an impediment. The large haptic touchpad does everything such devices ought.

Overall the Surface Laptop Studio was a pleasure to use as an everyday machine. But it was designed to offer convenient and cunning access to pen computing, not pleasingly speedy productivity apps. Because it misses the brief, it's hard to recommend the machine. But if your budget stretches to $1,400 and you want a fine-looking laptop that will build muscle and is sharp in unusual ways, this machine will do a job. ®