A simpler, easier remix sounds like a good thing, but glitches like these shouldn't be in a point release

Version 21.3 of Manjaro - codenamed "Ruah" - is here, with kernel 5.15, but don't let its beginner-friendly billing fool you: you will need a clue with this one.

Manjaro Linux is one of the more popular Arch Linux derivatives, and the new version 21.3 is the latest update to version 21, released in 2021. There are three official variants, with GNOME 42.2, KDE 5.24.5 or Xfce 4.16 desktops, plus community builds with Budgie, Cinnamon, MATE, a choice of tiling window managers (i3 or Sway), plus a Docker image.

The Reg took its latest look at Arch Linux a few months ago. Arch is one of the older rolling-release distros, and it's also famously rather minimal. The installation process isn't trivial: it's driven from the command line, and the user does a lot of the hard work, manually partitioning disks and so on.

Manjaro describes itself as being "a different kind of beast." The team maintains its own hierarchy of repositories, with more testing and integration – which is why it has releases, rather than a rolling release. Manjaro claims to be "designed to be accessible to newcomers": it has a simple installation program and comes with a choice of ready-rolled desktops, so taking a lot of the hard work out of getting Arch up and running. The user guide compares the relationship between Manjaro and Arch as being similar to that between Ubuntu and Debian.

The installation program is Calamares, a distro-neutral tool also used in GeckoLinux and OpenMandriva, so installation is a fairly smooth and polished experience. Before loading into the desktop, a startup screen asks you to choose a language, a keyboard layout, and offers a choice of loading only FOSS or also proprietary drivers. We like the approach of describing these with Linux locales (such as en_US and en_GB) – it's terse and space-efficient – but these are still tricky questions for a total newbie. 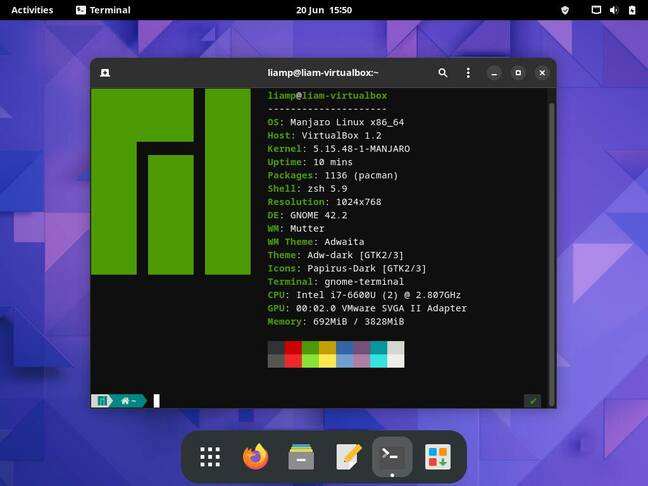 Once installed, you get a fairly typical range of tools, including Firefox and the standalone local version of the JavaScript-based OnlyOffice office suite, 7.1, and the TimeShift backup program. It's good to see the GNOME Classic shell option on the login menu by default.

We tried the new release on a testbed Thinkpad W520 using our normal Ventoy bootable USB, but worryingly the Xfce edition wouldn't boot, although it ran happily in VirtualBox.

The GNOME edition loaded up fine, but then refused to boot from another distro's GRUB menu, failing with a kernel panic. It loaded fine from its own GRUB menu. GNOME ran flawlessly, so we tried loading Nvidia drivers for the onboard Quadro 1000M GPU. Installation from the distro's own repository went fine, but the drivers didn't actually seem to work. GNOME Settings reported that only the CPU-integrated Intel GPU was in use.

We find glitches like this worrying. A simpler, easier Arch Linux sounds like a good thing, but we feel that significant issues like this shouldn't appear in a point release. Manjaro is, as it says, easier to install and more beginner-friendly than Arch, but this distro still isn't one we'd recommend to a rookie. ®