Lenovo has unveiled a small desktop workstation in a new physical format that's smaller than previous compact designs, but which it claims still has the type of performance professional users require.

Available from the end of this month, the ThinkStation P360 Ultra comes in a chassis that is less than 4 liters in total volume, but packs in 12th Gen Intel Core processors – that's the latest Alder Lake generation with up to 16 cores, but not the Xeon chips that we would expect to see in a workstation – and an Nvidia RTX A5000 GPU.

Other specifications include up to 128GB of DDR5 memory, two PCIe 4.0 slots, up to 8TB of storage using plug-in M.2 cards, plus dual Ethernet and Thunderbolt 4 ports, and support for up to eight displays, the latter of which will please many professional users. Pricing is expected to start at $1,299 in the US. 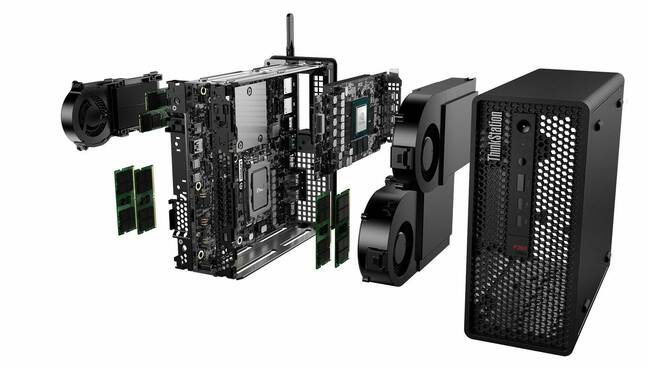 The new system is not the smallest workstation that Lenovo makes. The littlest is the 1 liter ThinkStation P360 Tiny, the updated version of the P350 Tiny announced last year. However, the new form factor packs in the high-end professional components you'd expect from a tower format chassis.

Lenovo claims that the new system outperforms previous generation small form factor desktop workstations by more than 50 percent, based on the company's own tests using the SPECworkstation 3.1 benchmark.

Lenovo said that it worked closely with both Nvidia and Intel to develop a compact form factor that can fit both the RTX A5000 GPU card and the cooling required to support it. The system also features an unusual layout with a dual-sided motherboard positioned in the middle of the chassis, which offers increased airflow to support the Alder Lake processors that run at up to 125W.

Rob Herman, VP for Lenovo's Workstation and Client AI Business Unit, claimed that the desktop workstation was "purpose built to deliver impressive performance in a space-saving form factor that our customers need."

Lenovo said the ThinkStation P360 Ultra is fully ISV certified and tested to pass MIL-SPEC standards, though not to the most demanding MIL-STD 810G standard for ruggedized hardware. ®