Virtual reality is all well and good, but decent haptics and a bit of force feedback are essential for it to be truly immersive. The Register donned the Teslasuit Glove at the Goodwood Festival of Speed this week.

We looked at Manus VR's Prime Haptic gloves in 2019 and while the accuracy and haptics were impressive, the sensation of gripping something in a VR session was lacking once one pushed past the nudging pads. 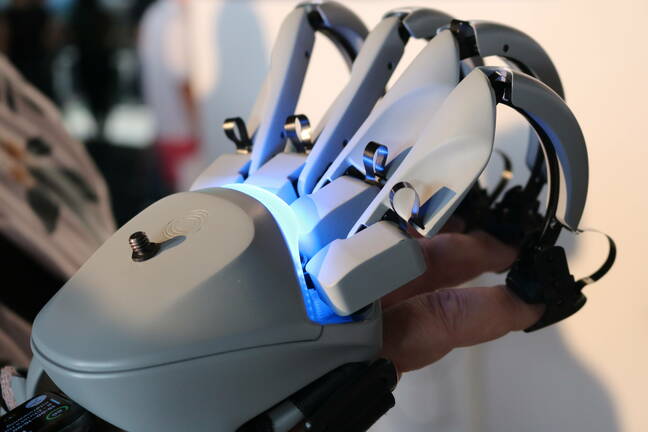 Teslasuit, notable for its eponymous VR bodysuit (which we also tried – more on that later), has attempted to deal with this with a glove aimed at making VR a little more tactile.

As well as haptics on the fingertips (Teslasuit makes used of Transcutaneous Electrical Nerve Stimulation – TENS – to create a wide range of sensations and virtual textures), the glove is motorized and can exert 9 Newtons of force or 2.8-3.3 kg*cm torque, according to the company's specifications, on fingers.

The gloves are wireless, and we were told to expect around 12 hours of battery life from them, although we imagine that would vary considerably depending on usage. They are also surprisingly light and comfortable to wear (and yes, the first thing we did was the exact thing you'd expect us to: curling our fingers into a ball and lifting just our middle finger).

One size fits all and each set comprises gloves for the left and right hand along with USB-C cables, pads, and a charger, all packaged in a hefty box.

HTC Vive Trackers or Meta Quest 2 Controllers can be fitted to make use of the accurate positioning data available from the gloves, although one would really want to dive into the Control Center, Studio, and SDK to take full advantage. The gloves are also most definitely not aimed at consumers, with a retail price well into five figures.

However, we can well imagine the devices, like the Teslasuit itself, proving an invaluable training tool.

The Teslasuit has been around for a while, but the technology remains impressively futuristic.

We poured our lockdown bod into one (yes, they do go very, very large) and, frankly, VR is never going to be same. As with the glove, the suit uses TENS and adds other electrical stimulation for haptics to cast the illusion of touching an object. It's a full body system (no pads near the genital area) and also permits biometry reading to track the state of the wearer and motion capture.

We were initially not sold on the concept – the sensations from the suit put this writer uncomfortably in mind of a very mild version of the PainStation – right up until a spokesperson turned on the rain effect which was, amazingly, just like standing in rain. One could feel each virtual drop.

A virtual drive in a racing car was next and, again, once we forgot we were sitting in a booth at FutureLab, the sensation was quite something. Pop on a VR headset and the immersion would be complete.

While neither the suit nor glove are aimed at consumers, both point the way to a considerably more immersive future. There are plenty of suppliers out there for haptic gloves, but not so many for force feedback-equipped devices (DextaRobotics' Dexmo springs to mind).

Last year Meta showed off its own research and, after a play with Teslasuit's products, we're curious to see how long it will take before such devices make their way out of industrial applications and into the hands of consumers. ®