Electric vehicles continue to generate headlines while slurping energy from the power grids, but even smaller producers are struggling with supply chain issues.

Lurking at the Goodwood Festival of Speed's Future Lab – held annually in West Sussex, England – was a vehicle that wouldn't be setting any records in the famous Hill Climb, but might change how one gets around town.

The vehicle is assembled in the UK, explained CEO of Northern Light Motors, Graham Browne, who went on to describe the supply chain struggles the company had faced. "There's not much of this which is actually coming from China anymore," he said, "because we've been trying to source everything from the UK, especially the motors and controllers."

"We've been quoted three times as long or probably five times as much money... yeah, it's been very, very challenging."

We saw a few intriguing options at 2021's Future Lab (and were heartened to note the configurator for the delightful Microlina is now online, even if the price has risen somewhat) and the theme continued this year with Browne's firm's single-seater contraption, which looks like a cross between a Sinclair C5 and a Morgan three-wheeler. 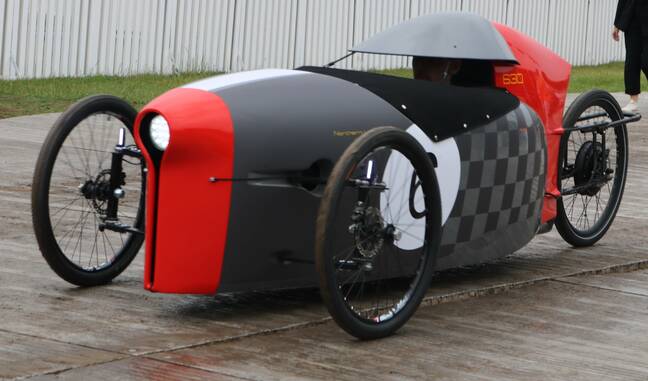 Those numbers? The wavelengths of visible colors in the Northern Lights. 428 is blue at lower altitudes. 557 is green at higher altitudes and 630 red the color associated with the higher.

We've been trying to source everything from the UK, especially the motors and controllers

The relatively small battery of the full-electric model means a range of only 40 miles is achievable. Pop that 20AH battery into the 557 and you should get as far as 100 miles with "moderate" human effort. Northern Light Motors reckons that 250 miles could be do-able before the weight of the battery starts to impact the handling.

The 630 is certainly eye-catching. The EV is classed as a moped, meaning you can hit the roads with only a CBT license and it will top out 45mph (although it is restricted to 28mph). Browne told The Register that a bigger battery could be fitted, increasing the range. 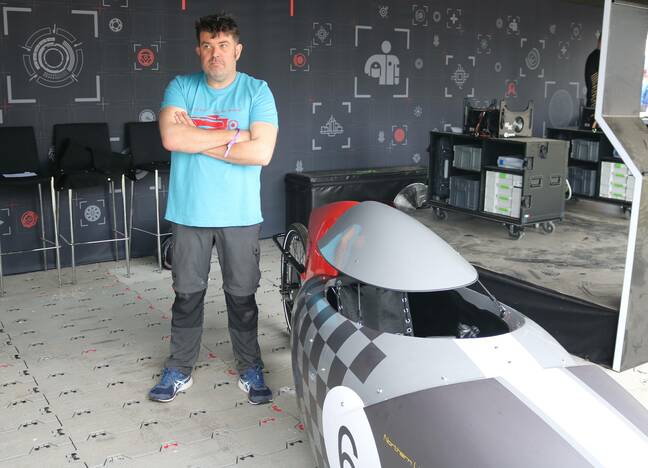 Graham Browne with the 630

While we were unable to take one out for a spin, it's hard not to imagine feeling a little exposed in the vehicle, which resembles a cross between a recumbent bicycle and Morgan Super 3. It is, however, a good deal more civilized than the former and considerably cheaper than the latter.

Northern Light Motors insists that the range "has been designed with safety in mind" with crumple zones, a safety cell and even a roll hoop. We'd still need to take a deep breath before our first ride though (although this writer was delighted to note that that the passenger weight limit is 120kg with a height range between six feet two inches and five feet two inches).

As one would expect, the 630 has headlights, brake lights and indicators (although the latter are a little difficult to see in daylight). It also has what the company calls "full weather protection," although we're not sure the top would be of tremendous use in the face of horizontal rain.

It also looked as though water could well run into the cockpit, although Browne reckoned it wouldn't. While the weather was not entirely kind during our visit, Northern Light Motor's driver remained dry during his stint at the controls.

While the cockpit is relatively stark, the 630 also features an essential rear view camera as well as a display to show data such as speed and charge. Fiddling with the parameters to control how the power is delivered is also possible.

"We've been busy productionizing these things," explained Browne, "building the production tooling and stuff... and we're ready to go."

At time of writing, Browne expected full production to start in July, although a backlog of orders means that if someone was to drop some cash now, they would need to wait until February 2023 for their 630 to turn up, ready to go (the base level 428 requires a bit of assembly and retrofitting).

Gesturing toward the natty vinyl wrap applied to the vehicles on the company's stand, Browne noted that even getting the decoration in was a struggle, with August being the next time the same type would be available.

Considering the cost of some higher-end e-bikes and the prices being demanded for electric vehicles, the Northern Light Motors approach has merit for enthusiasts. The back-to-basics approach and diminutive size might, however, put some off despite the lure of inexpensive transport to and from the shops (yes, there is space to stow luggage).

"I've had a chap," said Browne, "who wanted to take one around the world and I said we're not quite there."

But there is certainly enough for a ramble around a small town. ®

Trees may help power your next electric car

Plus: ASML cuts growth forecast and US CHIPS Act in limbo
Systems20 Jul 2022 | 1