The Reg FOSS desk takes the latest release, 22.6, for a spin

EndeavourOS is a rolling-release Linux distro based on Arch Linux. Although the project is relatively new, having started in 2019, it's the successor to an earlier Arch-based distro called Antergos, so it's not quite as immature as its youth might imply. It's a little more vanilla than Antergos was – for instance, it uses the Calamares cross-distro installer.

EndeavourOS hews more closely to its parent distro than, for example, Manjaro, which we looked at very recently. Unlike Manjaro, it doesn't have its own staging repositories or releases. It installs packages directly from the upstream Arch repositories, using the standard Arch package manager pacman. It also bundles yay to easily fetch packages from the Arch User Repository, AUR. The yay command takes the same switches as pacman does, so if you wanted to install, say, Google Chrome, it's as simple as yay -s google-chrome and a few seconds later, it's done. 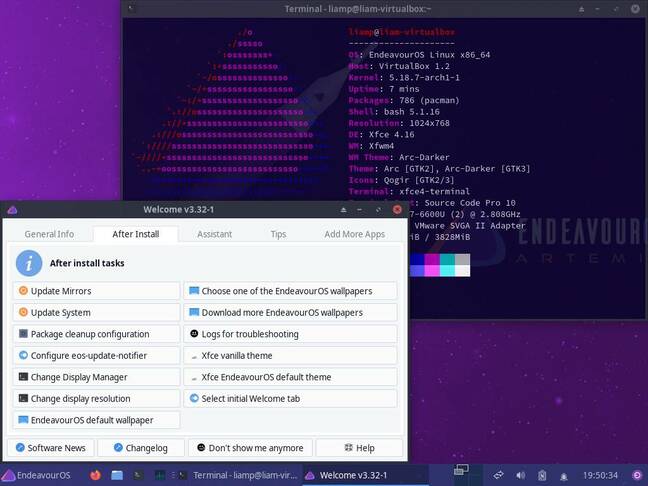 We tried the latest release, 22.6, code-named Artemis, in a VM and on an old ThinkPad W520, and it installed without a hitch. The ISO is a little under 2GB in size, and its boot menu includes an option to use current Nvidia drivers. On our relatively elderly hardware, this still booted into the Xfce desktop fine, but with a warning message that our GPU was too old and needed the version 390 legacy drivers. That's not as smooth as Elementary OS, which just installed the right drivers, but the identification and info were correct, which is the next best thing.

When you run the installation program, it asks which of its two modes to use: offline or online. An offline installation doesn't require any internet connection, but you get the same Xfce desktop as the live environment. Installing online presents a wide choice of desktops: Xfce, KDE Plasma, GNOME, MATE, Cinnamon, Budgie, LXQt, LXDE, and the i3 tiling window manager.

Impressively, there are Community Editions with even more choices, with options for OpenBox, Deepin, and additional tiling environments: Sway, BSPWM, Qtile, LeftWM, and the homegrown WORM.

We kept it simple and picked offline installations as Xfce is The Reg FOSS desk's second-favorite desktop. The result was good: a single taskbar at the bottom, Windows-style, with a tasteful purple theme and wallpaper. You don't get an office suite by default, just Firefox and a welcome screen. When you reboot into the installed distro, the welcome screen reappears, but unlike, say, the welcome screen in Linux Lite, it registers that the OS has now been installed, and offers helpful post-install options instead, such as picking local mirrors and doing an update. This is much better and far less confusing.

Updating EndeavourOS is quick, and although the updater is text-based, we enjoyed watching multiple downloads happen in parallel. The Grub screen is graphical, complete with more purple-hued wallpaper. The OS boots quickly, updates quickly, and feels snappy and responsive.

The distro is systemd-based, but by default, neither Flatpak nor Snap are installed, and there's no software store. The Xfce installation is based on traditional X.org (version 21.1.3), with no trace of Wayland to be seen. This should please the more traditionalist Linux users.

We tried installing a few apps from the standard repos and from the AUR, such as the htop tool, Nvidia drivers, the Tilde text editor, and Google Chrome. Everything worked as we'd expect. The Yay AUR installer can ask quite a lot of questions, but if you just keep tapping the Enter key, the defaults seem to do the job: everything we tried installed and worked successfully. And as ever, there's the excellent ArchWiki to turn to for guidance.

We still wouldn't recommend a rolling-release distro to a total Linux beginner, but if you have a little experience and want to learn more, EndeavourOS seems like a happy compromise. It's as straightforward to install as any standard distro, meaning that it's considerably easier than Arch itself. It doesn't include all the baggage of the big name distros' cross-platform packaging tools, software stores, and so on, or fancy custom desktops such as Pop!_OS's COSMIC or Elementary's Pantheon. It's simple and clean, but not as extremely minimalist as Alpine Linux.

After you install, you will have to make your way up the learning curve of Arch's command-line tools. But learning, always having cutting-edge components, and a distro you can customize to your heart's desire are Arch's selling points. EndeavourOS tries to get you there a little more easily, and we reckon it succeeded. ®