Wi-Fi arrives. As does a $2 price increase... but it's a worthwhile update

A year and a half after the debut of the $4 RP2040-powered Raspberry Pi Pico, the company is shipping a wireless-enabled version: the $6 Pico W. 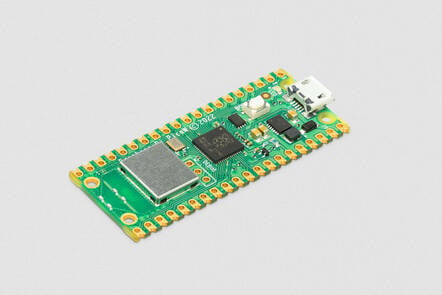 At first glance, things look similar. The 21mm x 51mm form factor is unchanged and the RP2040 microcontroller sits at the heart of things. The CPU? Still a dual core Arm Cortex-M0+ running at 133MHz and there is 264KB of on-chip SRAM and 2MB of on-board QSPI flash.

However, the hulking silver block lurking on the board indicates that something is quite different about the Pi Pico W. In this case, 2.4GHz IEEE 802.11b/g/n wireless networking replete with an on-board antenna.

All told, it is a worthy update. However, it also a (relatively) expensive update. Where the original Pico cost $4, the Pico W's price is $6. This brings it within touching distance of the Pi Zero W and a short hop to the Pi Zero 2 W (if you can find one).

The Register asked Pi boss Eben Upton to explain the 50 per cent premium for the privilege of working wirelessly. He said: "Broadly speaking it represents the cost of the wireless modem and associated RF components (everything under the can.)

"Some cost increase can be attributed to the PCB (jumps from 2 to 4 layers) and the PMIC on the chip (higher current design to supply both RP2040 and the Wi-Fi chip.)"

Upton went on to tell us that around 50,000 units would be in the channel for launch "with a lot of pipeline behind it."

"It's taken longer than we expected to get the production test up to full speed," he added, "but we're there now."

He went on to say that there was the potential to build roughly two million units between now and the end of the year. Not that there was the expectation to do quite so many, "but it's great to have a product which is to all intents and purposes unconstrained in volume."

Constrained is certainly a word that springs to mind when considering several of the company's other products, which seem to be made of unobtainium thanks to the supply chain woes afflicting businesses.

The Raspberry Pi team provided us with a Pico W to take for a spin, and we had few problems getting MicroPython up and running via a terminal session on our Windows 11 PC (with the Pico connected via USB.) So far so usual.

Not so usual was the ability to scan for access points, demonstrating the new wireless tech was both up and running and easily accessible. The option to operate in both station and access-point modes should make for some intriguing use cases.

It is also possible access network functionality via C, but we stuck with MicroPython during our experimentation.

While the Pi 4 Model B remains resolutely sold out at time of writing (although tools exist to scan retailers for stock) the Pico can be picked up relatively easily. The same will hopefully apply to the Pico W which can be bought individually or in 480-unit reels aimed at automated assembly. ®