Pandemics and university disinterest apparently no match for ingenuity and determination

The name may sound familiar. Dundee Satellite Station Ltd. is a phoenix rising from the ashes of the University of Dundee Satellite Receiving Station (DSRS), which was axed in 2019 after more than 40 years of operations.

The Natural Environment Research Council (NERC) cut funding for the facility in 2019 and, despite protestations from the likes of NASA, the lights went out when Dundee University refused to underwrite the annual costs of £338,000. As a reminder, the Principal of the University (paid nearly £300,000 including pension contributions) departed later that year under somewhat of a cloud.

The services provided by DSRS have proven invaluable over the years, with a vast archive of data collected from satellites by its receivers available to the public and industry alike. However, and despite repeated claims from politicians of the importance of space technology to the country's economy, it appeared to be all over.

Or not. In 2020 former staffer Neil Lonie told The Register that plans were afoot to rescue the tracking antennas and reconstruct the facility at the RAF Errol airfied. The Register took a trip to the site this year, and we were impressed by the achievement of the small team in bringing the service back online. 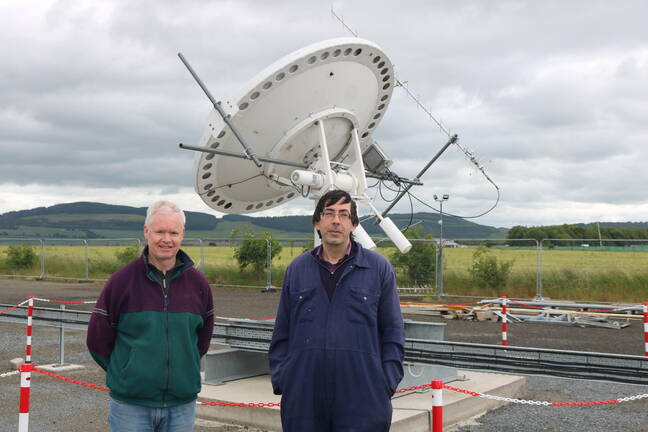 The story of how Dundee Satellite Station Ltd. rose from the ashes of the Dundee Satellite Receiving Station is one of ingenuity and tenacity, particularly considering the pandemic. Having made the decision to proceed, the team were able to commence commercial operations in the opening months of 2021 (the first imagery was received by the 3.7m antenna in September 2020). Fiber has since been laid to keep the satellite data flowing.

The decision to host the quantum Optical Ground Station (OGS) at Errol is further testament to the effort that has gone into the resurrection of the facility.

The system will consist of a quantum signal transmitter payload on a satellite and a quantum signal receiver attached to the OGS on the ground. A reflective 70cm telescope will be used to track the Low Earth Orbit satellite with high precision. Quantum secure communications (another weapon in the armory against cyber attacks) usually run along terrestrial fiber links, but are limited by distance. The hope is that the use of satellites will allow quantum communications to be sent securely all over the world.

The project is a joint venture between Dundee Satellite Station Ltd. and researchers at Heriot-Watt University. The Errol site, located on the bank of the River Tay, benefited from excellent sight lines and low light pollution. Having visited, we'll have to take the researchers word for cloud cover.

There are four antennas erected so far; 3.7-meter and 2.4-meter tracking antennas and a further two 2.8-meter antennas. Upgrades, the refurbishment of a another 2.8m antenna and a pair of geostationary antenna are in the pipeline, and now the OGS telescope. Reception and transmission in VHF, UHF, L-band, S-band, X-band, Ku-band, and the ground station support options are also on tap, and also handy for Scotland's burgeoning vertical launch industry as well as satellite tracking.

Going forwards, there are plans afoot for an additional site and power backups beyond UPS units. While the site can be mostly remotely managed, the size of the team means round-the-clock coverage is tricky and depends on the needs of customers. "The goal is to have enough staff that we can actually do 24-hour support," technical director Paul Crawford told us.

All of which require commercial contracts and revenues. The Dundee Satellite Station has been quietly notching up customers during its first year and a half of operations, and the OGS project is a further demonstration of the determination of a team unwilling to be parted from their antennas.

Oh, and just round the corner from site is the winner of the world's best bacon sandwich (if you're so inclined).