Thanks to Linux wunderkind Rudra Saraswat, not Canonical, this time

Unity 7.6 just appeared, although there is a more complete list of changes in the earlier announcement that it was in testing. 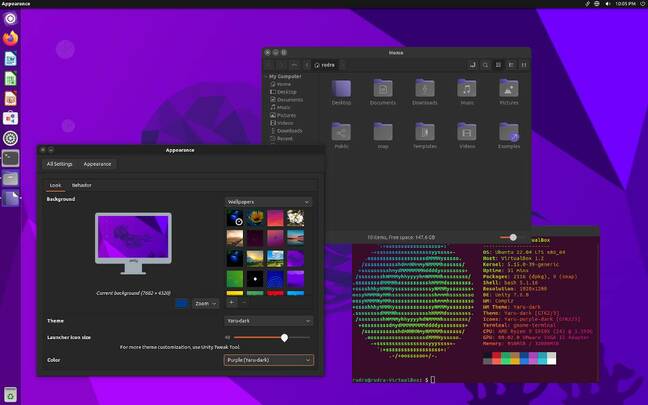 It has been quite a while since the Ubuntu's Unity desktop was updated. The last time it was bundled was Ubuntu 17.04, and the last release from Ubuntu itself was v7.5.

This new release doesn't come from Canonical: it's from Linux wunderkind Rudra Saraswat and his UnityX project. Users of the unofficial Ubuntu Unity remix, which we looked at a few month ago, will get the new version automatically.

The Reg FOSS desk has Ubuntu Unity 22.04 running on a couple of laptops and we can report that the new version does fix a few small glitches. The Unity remix is progressively replacing GNOME components, such as the text editor and file manager, with ones from other desktop projects, in order to get back features which GNOME has removed – notably, menu bars.

So Ubuntu Unity 22.04 uses the Nemo file manager from the Cinnamon desktop, rather than GNOME's Nautilus, and MATE's Pluma text editor instead of GEdit. As a small example, the update makes right-clicking the trashcan in the Launcher to empty it work again, without needing to open the trashcan's own window.

You don't need to use the remix, though: if you're curious, you can install it on ordinary Ubuntu. There are instructions in the announcement thread on Canonical's Discourse forums, where you can also report problems.

The remix still has a few small rough edges. The GNOME Shell is still installed, although it doesn't appear on the login menu. The remix uses the GNOME system monitor, which has no menu bar – possibly because the MATE one works fine, but doesn't show up in the app launcher. In the volume control, scrolling down increases the volume, and up decreases it, the opposite of what we expected. And on the accessibility front, several apps' menu bars don't respond to keyboard controls, including the terminal.

The main things are that it works, and things are getting fixed. As you might have gathered from our recent lament about desktop diversity, we're just happy to see another of the very few options that are totally un-Windows-like. Now that there is a version of Unity that's no longer maintained by Canonical at all, perhaps we might even see it on other distros. It used to be an option in Arch and Fedora.