Review Logitech has lined up another headset to tap into the continuing trend for remote and hybrid working: the Zone Vibe 125.

The Vibe 125 is a curious beast, mostly hidden away on Logitech's own site but available from the likes of Amazon and Dell for around £120 ($146), which pits it against some serious competitors. 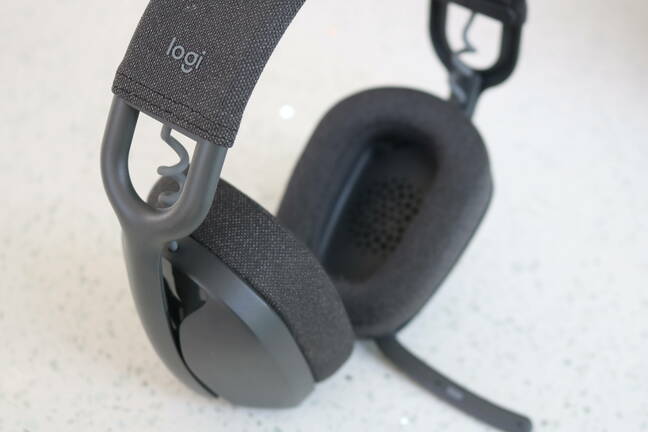 First the good – we've been using this headset for a few weeks now and it is absurdly comfortable, certainly when compared to earbud-based devices. It's perhaps subjective, but the soft, over-ear speakers fit very well and do a fine job at cutting out background noise.

Noise-cancelling technology apparently also plays its part, but we're not too sure how effective that really was. We didn't detect much change in background noise when the headphones were fired up.

There are 18 hours of talk-time or 20 hours of listening time, according to Logitech, and the headphones are wireless, connecting either via Bluetooth or the included USB receiver. The charging cable has a USB-A connector, although Logitech thoughtfully includes a USB-A to USB-C adapter in the box.

We used Bluetooth with both a Windows 11 PC and a M1 Mac Mini, and had no difficulty connecting to both. A toggle switch on the side dealt with power and pairing while other buttons handled volume, calls, and pausing music. Pretty standard stuff.

The mic can be flipped down from the left speaker or popped back up for muting purposes, complete with a soothing voice akin to Mother from the Alien franchise telling you if you're muted or not. A button on the mic boom is also available for silencing one's voice if flipping the mic up and down is too much effort.

Voice capture was clear and background noises were apparently absent, although we needed to find the "sweet spot" for microphone positioning.

Now the bad – all is not roses in Logitech's garden. We've looked at Logitech's keyboard and mouse products recently, and the plastics from which this headset is constructed did not have the same hewn-from-granite quality of some of the company's other products. The choice of fabric for the earphones and headband cover is also a concern. While the unit is very comfortable, we're not sure how long the material will retain its luster. The same goes for the sizing mechanism. Other headsets we've used have a reassuring ratchet and we can't help but wonder about the longevity of the Vibe's smooth sliding sizing system.

Overall, the headset would make for a good workhorse. It's a shame that wireless is the only option and the battery cannot be easily swapped out. One can certainly get better sound quality elsewhere, for a price, but for a working day the soft fabric of the earphones gives a comfortable fit and the lightness means it's easy to forget you're wearing the device.

This writer still prefers his Bose QuietComfort headphones, but with this Logitech unit hovering at around a third of the price, we'd suggest buyers looking for remote working headgear take a closer look. ®