You wanted flying cars and robo-butlers. Instead, we're getting tooth-cleaning morphing nanoparticle bots

Experts in chemistry, dentistry, and engineering have developed a way to electromagnetically control iron oxide nanoparticles to clean plaque on human teeth.

Iron oxide nanoparticles (IONP) have been approved by the US Food and Drug Administration for other uses. As the paper explains, they have both catalytic and magnetic properties. They catalyze hydrogen peroxide for an antimicrobial effect and they can be manipulated via magnetic fields.

To take advantage of these properties, the US boffins designed a magnetic control platform to rearrange IONP so they can be applied to oral hygiene.

"These STARS chemically treat and mechanically remove biofilms and can penetrate biofilms to retrieve samples for diagnostic analysis," the paper explains, noting that STARS mechanochemical treatment – brushing and activation of hydrogen peroxide – is much more effective than an anti-plaque mouthwash alone. 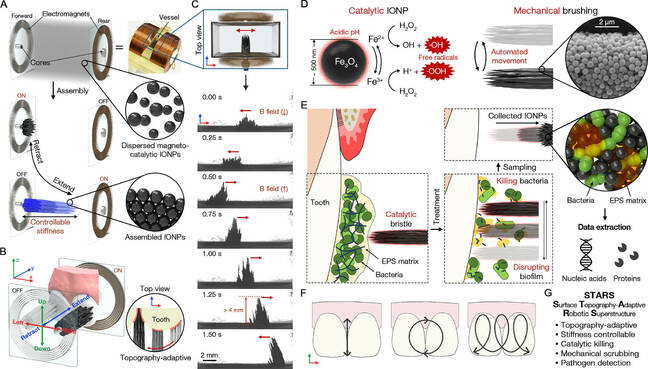 Illustration of assembly, control, and functional properties of STARS, from ACS Nano ... Click to enlarge

STARS can be dynamically programmed to take different shapes via magnetic field manipulation. The researchers transformed them into toothbrush bristles and into an elongated structure more like dental floss. They say the adaptive nature of STARS allows the system to take the most effective shape for the task at hand.

"The bristle’s length can reconfigure to reach distant surfaces in confined spaces as it moves from flat to curved and through interdental spaces," the paper explains, adding that altering the magnetic field strength allows variable bristle stiffness.

Hyun (Michel) Koo, a professor in the Department of Orthodontics at the University of Pennsylvania's School of Dental Medicine and co-corresponding author of the study, told The Register in an email that the device through which these nanoparticles can be delivered is still being developed.

We are working towards a functional prototype by next year

"We are trying different prototypes," he said, "But it will fit inside the mouth."

The challenge, he said, is to build a practical device that can control and retrieve STARS that fits within the mouth.

"We don't have a commercialization date but we are working towards a functional prototype by next year," he said.

Some STARS nanoparticles may become separated from the main structure through the friction of brushing. While the researchers offer reassurance that IONP are biocompatible – they're not toxic to human cells and don't harm oral tissue – detached nanoparticles should not result in swallowing more than one's recommended daily allowance of iron (~8-18mg).

Koo said swallowing STARS should not be a problem.

"The STARS are fully retrievable using the magnets; but even if you ingest bits of STARS, it would be OK because they are made of iron oxide (which are used in FDA-approved formulations for iron deficiency and in food coloring) and the amounts being used are very low (a milligram)," he explained. "Since the individual nanoparticles are so small, the material (bristles) looks much smoother and less abrasive than iron filings."

The STARS system also cleans up after itself. The paper explains that the IONP continually reattach themselves and also get gathered by the magnetic field and reintegrated into STARS mass.

In fact, the reattachment and reconfiguration process brings biofilm material into the STARS structure where it can be analyzed for pathogens. Thus the hope is that STARS will serve both a therapeutic function – cleaning teeth – and a diagnostic function – assessing potential health risks, particularly for those unable to take care of themselves.

Koo said the initial goal for STARS was to help those unable to clean manually, but he believes an automated device could make tooth cleaning easier for everyone.

"It can be better and easier to achieve cleaning because all three steps (brushing, flossing and rinsing) can be done simultaneously in a single, automated step rather than sequentially, involving multiple steps," he said. "This can enhance both efficacy and user compliance (STARS can be programmed to access those difficult to reach spaces such as around the gum line and between the teeth in automated fashion)." ®