Decades in the making, billions of dollars, all so we can say together: My god, it's full of stars!

Pic On Monday, NASA released its first image from the James Webb Space Telescope, or JWST, providing the sharpest and deepest glimpse yet of distant galaxies from the very early universe.

The telescope blasted off from Earth at the end of December, and about a month later the probe arrived at its new home about a million miles from our planet to begin work. It picked up its first starlight in early February. Now it's taken a full picture.

Revealing the infrared snap at a press conference that concluded in the past hour, US President Joe Biden said: "Six and a half months ago a rocket launcher carried the world's newest, most powerful deep space telescope on a journey one million miles into the cosmos, unfolding itself deploying a mirror 21-feet-wide, a sunshield the size of a tennis court, and 250,000 tiny shutters each one smaller than a grain of sand.

"Put together, it's a new window into the history of our universe. And today we're gonna get a glimpse of the first light to shine through that window."

The picture, dubbed Webb's First Deep Field, shows SMACS 0723, a cluster of galaxies in the foreground magnifying, using gravitational lensing, the light from more distant galaxies in the background. Each blob is a source of light, there are thousands of galaxies in the image including some of which have never been observed in infrared light before until now. The pic represents how SMACS 0723 looked 4.6 billion years ago. 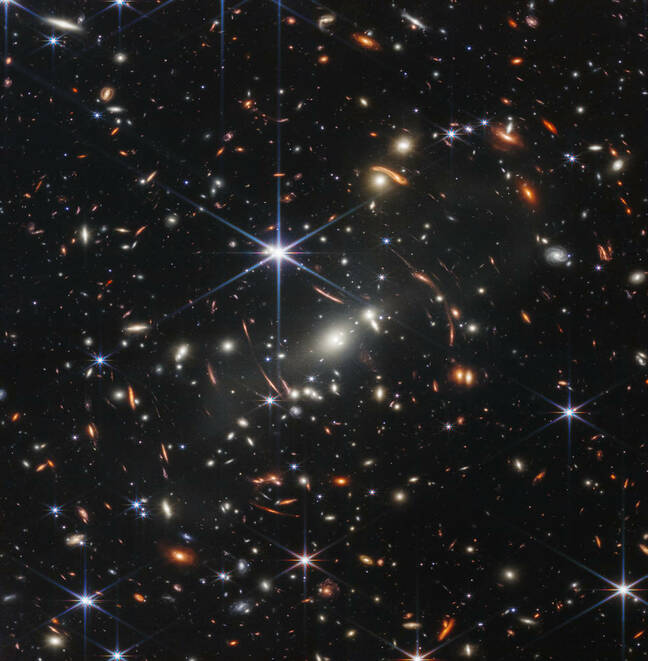 NASA's Administrator Bill Nelson said the snapshot covered a region of space equivalent to "a grain of sand on the tip of your finger at arm's length." You can find higher-resolution versions here and more info here.

"You're seeing just a small little portion of the universe," he said. "You're seeing galaxies that are shining around other galaxies. You know, a hundred years ago, we thought there was only one galaxy. Now, the number is unlimited."

Webb's First Deep Field is a composite image made up of snapshots taken at different wavelengths over 12.5 hours. It is the deepest and sharpest infrared image of the distant universe to date. Here is an animation comparing the Hubble Space Telescope and JWST's shot of SMACS 0723, revealing the level of extra detail observed by the newer probe.

Launched on Christmas Day 2021, the JWST orbits the second Sun-Earth Lagrange point, also known as the L2, keeping it out of our planet's shadow. The $10 billion telescope is a marvel of engineering, complete with the aforementioned sunshield made out of thin layers of Kapton for its base.

A panel of gold-plated hexagonal-shaped mirrors sits atop. Stretching 6.5 metres across, each of the 18 mirrors is supported by struts and motorized actuators, allowing each mirror to move with six degrees of freedom. They have to be perfectly aligned with one another at 1/10,000th the thickness of a human hair to create one giant primary mirror capable of focusing light from distant objects more than 13 billion light-years away.

Light reflected from this mirror is refocused by a smaller secondary mirror, some 0.74 metres in diameter attached at the end of three long arms. Photons are directed to a series of instruments, including a near-infrared camera and spectrograph, a combined mid-infrared camera and spectrograph system, and a field guidance sensor that helps point the telescope at relevant targets. These instruments sit behind the primary mirror.

The photo is just one of the first few targets astronomers selected to study in the first run of the JWST's science operations. Other images will be revealed by space agencies on Tuesday, detailing: the Carina Nebula, a bright stellar nursery; the Southern Ring Nebula, a thick envelope of dust and gas around a dying star; and Stephan's Quintet, a compact galaxy group. The JWST doesn't just provide astronomers with images. The light spectrum of WASP-96 b, is also to be expected to be released tomorrow, will allow researchers to probe the chemical composition of the gas giant exoplanet.

"When NASA launched the Hubble Space Telescope in 1990, we were able to see the stars unobstructed by the Earth's atmosphere and understand the universe in ways we could have never imagined even a few decades earlier," US Vice President Kamala Harris said during the briefing.

"And now we enter a new phase of scientific discovery. Building on the legacy of Hubble, the James Webb Space Telescope allows us to see deeper into space than ever before, and in stunning clarity. It will enhance what we know about the origins of our universe. Our solar system, and possibly life itself." ®