Memory maker Micron says it experienced a prolonged power disruption at the Hiroshima DRAM manufacturing facility on Friday 8 July, resulting in a complete shutdown of its production lines. 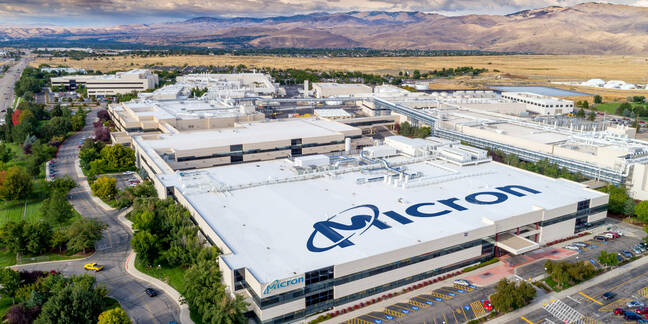 The incident is expected to result in a loss of production output and hit the company's bottom line, Micron warned, but it isn’t clear what effect this may have on the wider memory market.

The chipmaker said in an update that the loss of power was caused by "inclement weather" in the area, which prompted the implementation of its factory shutdown protocols. All of Micron's workers are reported to be safe.

Last week, Japanese semiconductor manufacturer Renesas was forced to shut down its Kawashiri facility for a week in another weather-related incident, following a lightning strike during Typhoon Aere that hit a power line feeding the factory.

According to Micron, operations at the Hiroshima plant have resumed at reduced levels and will continue to ramp up this week, but the company said it expects to see production output loss and an associated cost impact from this during its fourth quarter of fiscal 2022 and first quarter of fiscal 2023.

For example, Micron said it is assessing those wafers that were in the midst of production at the time of the power shutdown to determine whether they will meet the company's quality standards, meaning it is likely some wafers will need to be scrapped instead of being made into memory chips.

It isn't clear what impact this may have on the broader DRAM market. Micron had already announced in its Q3 of fiscal 2022 results that it expected to see a 13 percent drop in revenue for this quarter due to falling demand for memory in the PC and smartphone markets, leading to fears that there may be an overproduction of these components.

Financial analysts at Jefferies Group had already warned in May that the semiconductor industry is facing an inventory correction in the second half of this year or early 2023, thanks to steep inflation, signs of end-user demand slowing, and companies stockpiling components because of earlier supply difficulties.

Gartner vice president for semiconductors and electronics Richard Gordon told us he did not think this latest incident would have much of an impact on the supply chain.

"Micron came out with a warning and we expect more companies to follow suit when they announce their 2Q financials in a few weeks' time. We are already hearing about semiconductor inventories approaching normal levels, semiconductor orders being cancelled, lead times shortening, price weakness, etc," Gordon said, adding that "by the end of the year we expect the last signs of the 'chip shortage' to be gone."

Gordon added that predictions he made earlier this year about the chip boom turning to bust were now being vindicated.

Micron said it is currently assessing the impact the factory shutdown is likely to have on near-term supplies, and is working to utilize existing inventory and its remaining DRAM factory network to supply customers with critical requirements. The company said it will update customers when the picture becomes clearer. ®