Samsung has unveiled new GDDR6 DRAM chips that it claims are the first with a data transfer rate of 24Gbps per pin, chiefly aimed at increased performance for upcoming high-end graphics cards and GPU accelerators.

The Korean giant said it has begun sampling the chips with a capacity of 16Gb, and plans to commercialize these in line with GPU platform launches that will be able to support them. Customer verifications are starting this month, meaning that end users may not have to wait long to see them in shipping products.

Samsung's 24Gbps GDDR6 will deliver 30 percent faster speeds compared to the previous product, which is to say that they are clocked about 30 percent faster than the existing Samsung parts with a data rate of 18Gbps. Other chipmakers offer GDDR6 memories with data transfer rates typically ranging from 14–16Gbps. 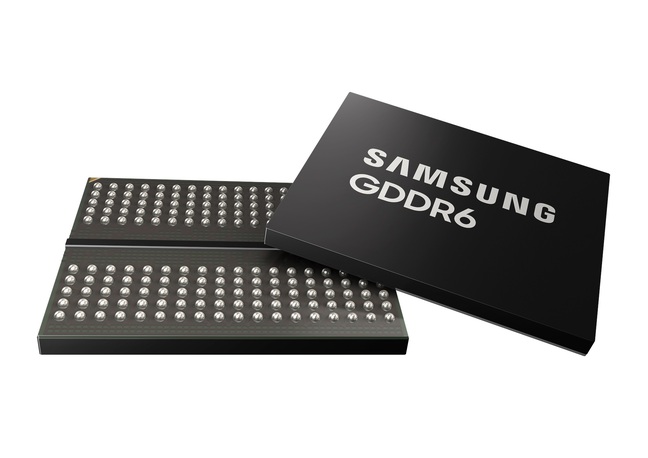 When integrated into a premium graphics card, the GDDR6 DRAM can transfer up to 1.1TB of data in one second, Samsung claims, saying this is equivalent to about 275 HD movies.

While the new memory is intended to give a boost to graphics performance in the next wave of GPUs for PCs and game consoles, it will also have an impact in other areas where GPUs are used, such as applications involving artificial intelligence processing and high-performance computing (HPC) systems. This is because GDDR prioritizes delivering high bandwidth rather than reducing latency, which is the main design goal for the DDR memory used with CPUs.

"The explosion of data now being driven by AI and the metaverse is pushing the need for greater graphics capabilities that can process massive data sets simultaneously, at extremely high speeds," Samsung's EVP for Memory Product Planning, Daniel Lee, said in a statement.

Samsung's GDDR6 portfolio will also feature low-power options, with an eye on the battery life of laptops. This employs what it calls dynamic voltage switching (DVS) technology which adjusts the operating voltage depending on performance requirements, down to 1.1v rather than the 1.35v GDDR6 standard for 20 percent more power efficiency.

The company said these GDDR6 DRAM chips are manufactured using its third-generation of 10nm-class production process using extreme ultraviolet (EUV) technology. It also expects to see double-digit annual growth in the high-performance graphics market over the next several years.