Commissioning pics show spacecraft can peer near as well as far

Instruments on the James Webb Space Telescope have turned closer to home to snap images showing the gas giant Jupiter.

The James Webb team started the week with some frankly jaw-dropping imagery of deep space and have rounded it out with images of Jupiter and spectra of several asteroids. The captures were performed to test the telescope's instruments before the formal start of science operations. 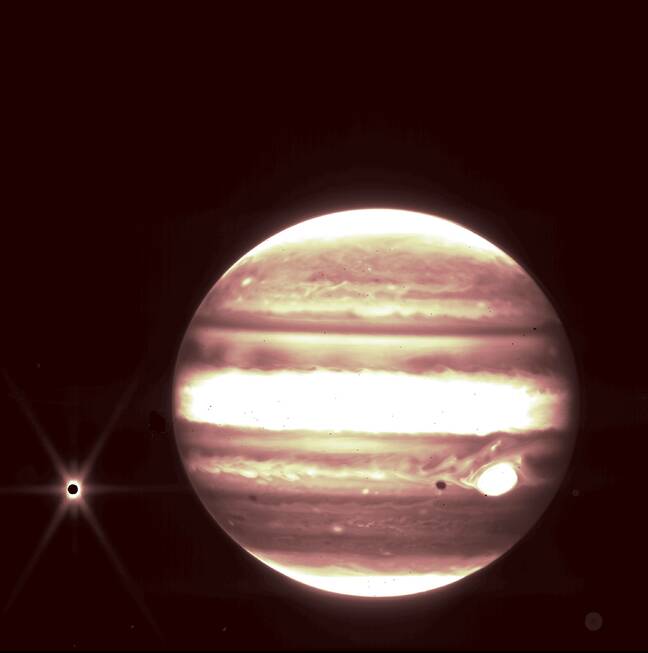 The images, shot by the spacecraft's NIRCam instrument, show the bands that encircle Jupiter, as well as the Great Red Spot (or Great White Spot, thanks to the way the infrared image was processed). Intriguingly, some of Jupiter's moons are also visible with Europa, Thebe, and Metis putting in an appearance.

NIRCam (Near Infrared Camera) is the spacecraft's primary imager and covers the infrared wavelength range from 0.6 to 5 microns. As well as being able to detect light from the earliest stars and galaxies, scientists also hope to use it to peer at Kuiper Belt objects.

For the image of Jupiter, the 2.12-micron filter was used.

Scientists were thrilled at this latest demonstration of the telescope's capabilities. "Combined with the deep field images released the other day, these images of Jupiter demonstrate the full grasp of what Webb can observe, from the faintest, most distant observable galaxies to planets in our own cosmic backyard that you can see with the naked eye from your actual backyard," said Bryan Holler, a scientist at the Space Telescope Science Institute in Baltimore, who helped plan these observations.

"I couldn't believe that we saw everything so clearly, and how bright they were," said Stefanie Milam, Webb's deputy project scientist for planetary science based at NASA's Goddard Space Flight Center in Greenbelt, Maryland. "It's really exciting to think of the capability and opportunity that we have for observing these kinds of objects in our solar system."

While upcoming missions will take a much closer look at objects such as Jupiter's satellites, scientists hope that the observatory will be able to spot phenomena such as plumes of material being ejected from Europa and Saturn's moon Enceladus.

The other question was just how fast objects could move while still being tracked by Webb. The telescope was designed to be able to track objects that move as fast as Mars, up to 30 milliarcseconds per second, according to NASA. During commissioning, the team showed that useful science could still be performed even for objects moving more than twice as fast, at up to 67 milliarcseconds per second.

NASA compared this to being similar to photographing a turtle crawling when one is standing a mile away.