Or to make the fans shut up. Either way, you won’t be moving much with this setup

Computer chips are getting so hot these days, some companies are starting to put liquid cooling into laptops so that they can run faster — or quieter and less hot to the touch. 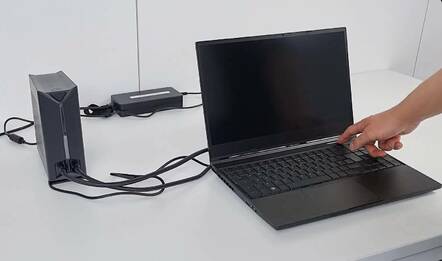 Tuxedo's liquid-cooling module, called Aquaris, is offered as a €199 ($201 based on current exchange rates) add-on for the laptop, which varies in price based on configuration but starts at around €2,000 ($2,028) for the hardware.

The PC vendor said the water-cooling system can be used to complement the laptop's conventional air cooling, either to maximize the performance of the CPU and GPU or to lower fan noise and reduce the temperatures of the laptop's surface and hardware.

Unfortunately, Tuxedo didn't provide any claims about how much more performance Aquaris would enable. However, a review of a competing liquid-cooled laptop with similar specs, the XMG Oasis, said the liquid cooling enabled a roughly 10 percent improvement in gaming performance. (And yes, there are competing laptops and similar kit: tell us your experiences with other gear in the comments.)

Aquaris is controlled via software using a Bluetooth connection, and the software lets users adjust the speeds of the fan depending on thermal needs and monitor how that impacts the CPU and GPU.

The system works by sending cool water through two hoses that connect to connectors in the back of the laptop. The water flows from one hose into the laptop, goes through an internal cooling tube that sits on top of the air cooling's heat pipes, and sends warm water back through the other hose.

The liquid-cooling system weighs roughly 3.06 pounds, and it needs to plug into an outlet for power, so this isn't a mobile solution by any means. However, this could be useful for someone who plans to use the laptop for less compute-intensive needs on the go and then has a dedicated station for the liquid-cooling setup.

Whether or not enough people will put up with the lack of mobility and the setup requirements in exchange for some extra performance is another story, but these computer chips do seem to keep getting hotter and hotter. ®