The Rocky Linux Project has released version 9 of its RHEL-compatible distro and debuted its new build service.

Rocky Linux 9, codenamed "Blue Onyx", is here at last, some two months after the upstream distro on whose source code it is based. Its progenitor, Red Hat Enterprise Linux 9, was announced on May 10. The best-known other modern CentOS Linux replacement, AlmaLinux 9, went into beta in April, and shipped just over a fortnight after Red Hat.

Some other RHEL rebuilds seem to be struggling with version 9, too. Oracle released Oracle Linux 9 this month, and some of the lesser-known projects still haven't released their final versions. For instance, Virtuozzo's VzLinux 9 remains in beta. 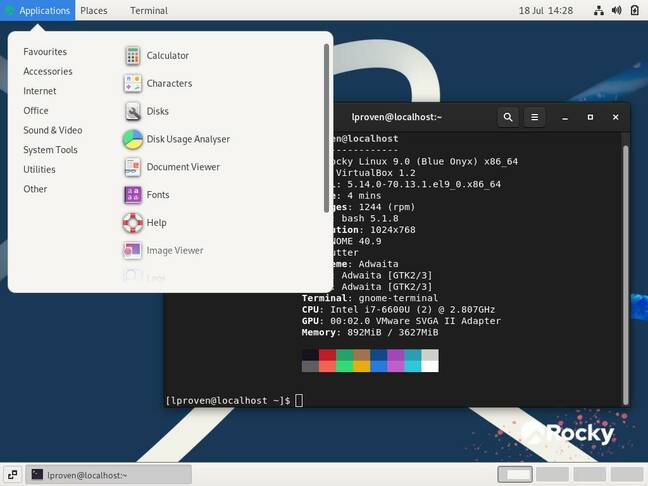 Rocky 9 comes with GNOME Shell 40, and the familiar GNOME Classic is pre-installed

The internet has a short memory, but once there were multiple RHEL rebuilds, including Scientific Linux and White Box Linux. Today, Oracle Linux and Springdale Linux are the last survivors from that era.

Red Hat was not altogether happy about Oracle Linux, which is fair enough: some interpreted the release of Oracle Linux in 2006 as an attempt to undercut Red Hat's support revenues and cause share prices to drop. As we all know, IBM bought Red Hat in 2018.

Red Hat occasionally took steps to make life difficult for its cloners, such as changing the way it packaged its source code. The ultimate solution was to take CentOS in-house in 2014, effectively validating one particular rebuild and thus killing off most of the competition.

If you want to know what's in Rocky 9, you can read our coverage of RHEL 9 from May. The primary difference in the new version is also the main cause of the delay: its new build system.

Project founder Gregory Kurtzer told us: "With our first release (8.4) we built the infrastructure from scratch using Koji (the Fedora build system) before we did anything else, and this process, plus organizing the community took four months. [...] After the release of Rocky Linux 8 with Koji, we saw the need for a purely cloud-native build infrastructure that does everything via microservices and ties everything together into a single usable platform. This is Peridot; a completely cloud-native build platform for Rocky Linux that can be installed and used via any Kubernetes platform easily."

But Rocky Linux 9 is here now, and it works, although The Reg FOSS desk had some slight hassles installing it in VirtualBox. To our surprise, the minimal network-install image had no network repository pre-configured, couldn't find mirrors automatically, and adding the repo from the instructions didn't work.

Installing from the full Rocky 9 DVD ISO worked fine, but we had to disable 3D graphics acceleration for the mouse to work, and even then, the pointer got trapped in the guest window and we needed to use host key to free it. Adding the EPEL repos and installing the Guest Additions sorted this out, and to be fair, the mouse-pointer issue affected AlmaLinux 9, too (although it was able to find its own online mirrors fine, unaided).

True, a desktop hypervisor isn't a typical target for a server distro. It may be a total coincidence, but it would also be on-brand for a Red Hat-derived product not to support a rival's hypervisor. For comparison, GNOME OS clearly states that it only works on GNOME boxes and nothing else.

It's a good thing to have more than one replacement RHEL rebuild. There's still room for these projects to differentiate themselves: AlmaLinux's ELevate tool is a good example.

Rocky 9 will get updates until the end of May 2025 and security fixes until 2032. Over that lifespan, arriving a month or two after RHEL 9 is no biggie. ®