Just months after getting Lotus 1-2-3 for UNIX running on modern Linux, Tavis Ormandy – a white-hat hacker and member of Google's Project Zero team – has conjured the same trick with classic text-mode WordPerfect 7.

He has even wrapped it up in a .DEB package for easy installation on Ubuntu and Debian-family distros – and since it has few external dependencies, and since it's a safe bet that we won't see any updates to this 1997 program, you can probably install it on other distros using the alien command.

This is the original text-mode version, and it runs in a terminal window, or even on the Linux console. If you are one of the many admirers that WordPerfect had in its early days, you should enjoy this. If you're not, prepare for a surprise – but we have what may be good news, too.

Unlike, say, Lotus 1-2-3, WordPerfect was not originally a DOS app. It was first written on and for a Data General minicomputer, and later ported to many operating systems, including DEC OpenVMS, OS/2, NeXTstep, the Atari ST and Commodore Amiga, and the Apple II, IIGS and classic MacOS. Alongside all of these, there were versions for various proprietary Unixes, including SCO Xenix. That's what Ormandy has resurrected for Linux.

This means that this is a character-mode app, designed to run on a terminal – meaning a real hardware terminal, such as a Wyse 60, or on the text-mode console of a SCO Xenix server. (The X window system was an expensive optional extra for Xenix, and most users never bought it. Your reporter installed quite a few Xenix boxes in the 1980s, and not a single one had graphics, networking or a C compiler… which is a large part of why Linux was such a success.)

The story of WordPerfect's rise and fall is also told by its former exec veep, W E "Pete" Peterson, in the book Almost Perfect – also now out of print, but which can be read for free on the author's site. 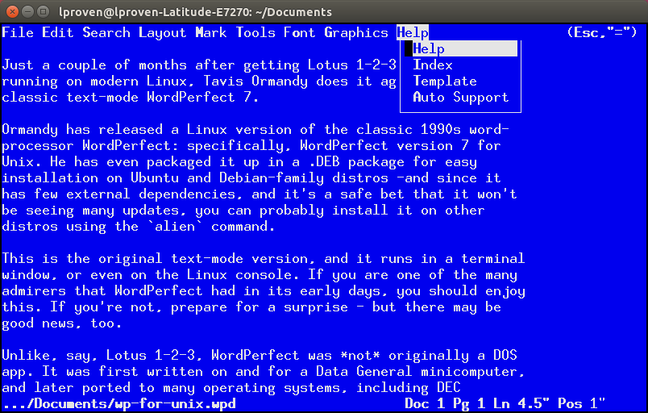 WordPerfect 7 for UNIX, running perfectly happily in a Linux terminal in 2022

Up until WordPerfect 5, the program had a very idiosyncratic user interface which made heavy use of the function keys. Each key had a separate meaning on its own, or with Shift, Alt or Ctrl, and with combinations of Shift and Alt and Ctrl. It was complicated, and even experienced users often referred to a keyboard template [PDF] – a piece of cardboard you placed on your keyboard, which surrounded the function keys and showed reminders of what they all did.

This template acted as a sort of informal copy-protection: if you didn't have one, the app was almost inoperable. Desperate users even photocopied the thing, hand-trimmed and sellotaped together the result and stuck it on.

That's what you are going to get if you install Ormandy's revenant 1990s application. WordPerfect 7 for Unix is a strange combination of some of the features of classic (that is, before PC version 5) WordPerfect, such as using F1 to mean "repeat character" and F3 for Help, and some of the version 5 features, such as drop-down menus, although oddly accessed via Esc+= rather than Alt or F10 or any DOS-standard keystroke.

On the other hand, we can just about see a use for this. As we've written recently, a lightweight Linux distro, such as Raspberry Pi Desktop OS, or for slightly less geriatric kit, ChromeOS Flex, this could give a good use to a clapped-out laptop. WordPerfect for Unix is a powerful, capable word-processor that doesn't need a graphical desktop. In fact, it's almost certainly the richest word processor for text-mode Linux that there's ever been, or ever will be.

You could install a plain text-mode Linux distro such as Ubuntu Server, or 32-bit Debian, onto an old laptop and use this as the ultimate distraction-free word-processor. With no need for a graphical desktop at all, it will run happily in a quarter or a half a gig of memory, maybe even less. With some effort, you could even connect to Wi-Fi, so you could email the file to yourself when using a bigger computer. LibreOffice happily opens and converts WordPerfect format files.

As Ormandy notes, strictly the version he has revived is an evaluation copy, but it appears to be fully functional and unrestricted. The Reg has asked Corel for any comment on its legality, and we will update this story if we hear back.

Realistically, though, it is probably easier to use DOS WordPerfect in DOSemu or similar. It's a more mature version of the program and rather easier to use, and the WPDOS site will help you get it working. But there's another alternative as well.

WordPerfect Corp didn't stop work after WordPerfect 7. There is also WordPerfect 8 for Linux. Unlike the previous version, this is a native, graphical, Linux app. It's a 1990s Linux GUI, meaning it's a bit blocky and ugly, but it works. The program saw two versions, WordPerfect 8.0 and 8.1, and was also released in a Download Edition which was free to download, use, and share, and was distributed with various Linux distros including Corel LinuxOS, SUSE Linux, and Caldera OpenLinux. 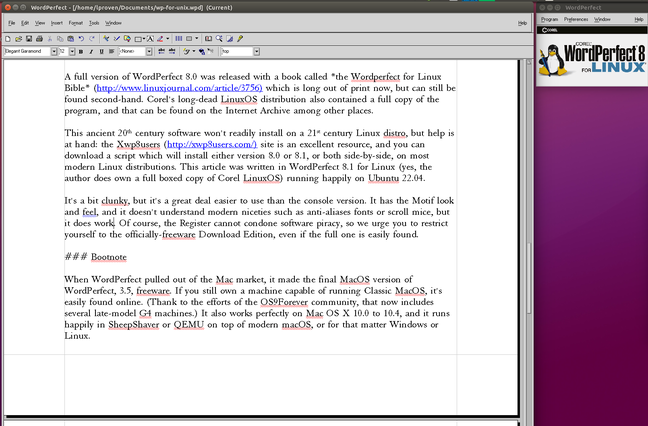 A full version of WordPerfect 8.0 was released with a book called Wordperfect for Linux Bible – long out of print now, but can still be found second-hand. Corel's long-dead LinuxOS distribution also contained a full copy of the program, and that can be found on the Internet Archive among other places.

This ancient 20th century software won't readily install on a 21st century Linux distro, but help is at hand: the XWP8Users site is an excellent resource, and you can download scripts which will install either version on most modern Linux distributions. This article was written in WordPerfect 8.1 for Linux (yes, the author does own a full boxed copy of Corel LinuxOS) running happily on Ubuntu 22.04.

It's a bit clunky, but it's a great deal easier to use than the console version. It has the Motif look and feel, and it doesn't understand modern niceties such as anti-aliased fonts or scroll mice, but it does work. Of course, The Register cannot condone software piracy so we urge you to restrict yourself to the officially freeware Download Edition, even if the full one is easily found.

When WordPerfect pulled out of the Mac market, it made the final MacOS version of WordPerfect, 3.5E, freeware. If you still own a machine capable of running Classic MacOS, it's easily downloaded, and has instructions too. (Thanks to the efforts of the MacOS9Lives community, MacOS 9 now runs on several late-model G4 machines.) It also works perfectly on Mac OS X 10.0 to 10.4, and runs happily in SheepShaver or QEMU on top of modern macOS, or for that matter Windows or Linux. ®