Or an eight-core AMD Ryzen. Not made for personal use, but what's stopping you?

There's something satisfying about fitting a decent processor in a small form factor, and the latest example is a credit card-sized single-board computer that uses an 11th-gen Intel Core part.

The single-board PC is from Aaeon, the industrial-computer-focused subsidiary of Asus, and it's being made alongside another board of the same size that uses an AMD Ryzen Embedded V2000 processor. According to CNX Software, Aaeon expects the boards will enter mass production by the end of September.

These two little units are going under the brand name "de next," and they really are close to the size of a credit card, with each board measuring 84 millimeters long and 55 millimeters wide.

Taiwan-based Aaeon even went as far to say that the Intel-based board is the smallest one yet with a Core processor. The company didn't provide any superlatives for the AMD-based board, though we wouldn't be surprised if it's one of the smallest options out there with such CPUs.

When people read single-board computer, they may think of the Raspberry Pi, which brought the form factor to the masses. The world is overflowing with Arm-compatible single-board computers, and others with other architectures, such as RISC-V and MIPS. There are also x86 SBCs though we're talking about Aaeon's hardware here today due to its choice of silicon. 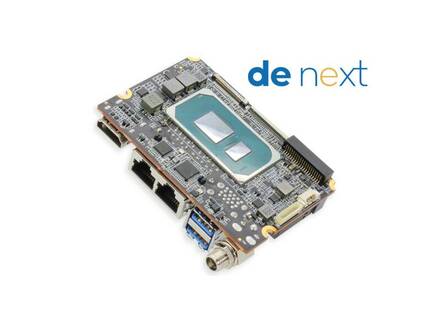 What the 'de next' single-board PC with an 11th-gen Intel Core chip looks like ...

These Aaeon boards are made for industrial purposes, such as transportation, robotics, and other environments where data needs to be processed close to the source. We wouldn't fault you, however, if you justified a personal purchase so you could plop one of these little things on your desk. We just don't know how much it would cost you yet.

With the industrial focus, the Intel- and AMD-based boards support a range of operating temperatures, from 32 to 140°F (0 to 60°C). What helps these boards endure such temperatures is the fact that they use embedded versions of CPUs from Intel and AMD.

The Intel-based de next-TGU8 supports three options from Intel's 11th generation of Core embedded CPU: the dual-core i3-1115G4E, the quad-core i5-1145G7E, and the quad-core i7-1185G7E. The i3 has a base frequency of 2.2GHz and a turbo frequency of 3.9GHz while the i7 can run at a sustained speed of 1.8GHz and at 4.4GHz in bursts. Each processor has a thermal dynamic power (TDP) that ranges from 15-18 watts, and they all support hyperthreading. 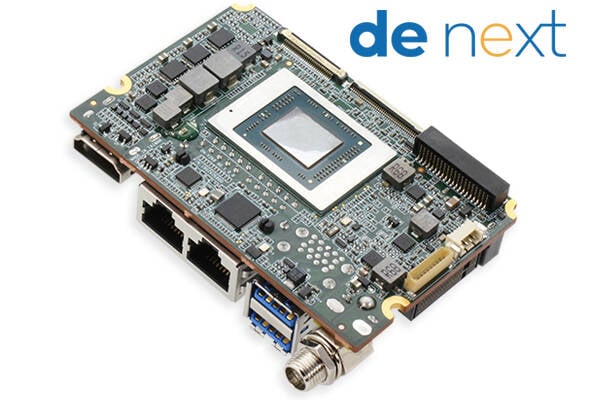 ... And this is what the AMD-based board looks like

The Intel- and AMD-boards each support up to 16GB of LPDDR4x memory, though the former has a memory bandwidth of 3,733 MegaTransfers per second (MT/s) while the latter does 3200 MT/s.

They also both come with integrated graphics and support up to two simultaneous displays: one at a 1080p resolution with an HDMI port, and the other at 4K with an Embedded DisplayPort.

Now, we must state that the boards are not as thin as a credit card. But that's for a good reason. They come with an array of I/O options: the aforementioned HDMI 1.4b and Embedded DisplayPorts, plus two Ethernet ports, two USB 3.2 Gen 2 ports, and a DC power jack.

And the system will become even thicker if you apply the board's specially designed heatsink and fan assembly, which seems to double the board's depth, judging by an image provided to CNX.

Regardless, these boards are still remarkably small for having the ability to offer computing power that is likely on par with some laptops. We know there's good debate as to whether Moore's law is coming to an end, but it still shows how far we've come from the mainframe era decades ago. ®