From Beetles to bugs: 'Development of software expertise biggest switch automotive industry has to make'

Failure to turn around Volkswagen's software unit seems to have cost CEO Herbert Diess his job in the latest struggle to see the German carmaker modernize its organization. 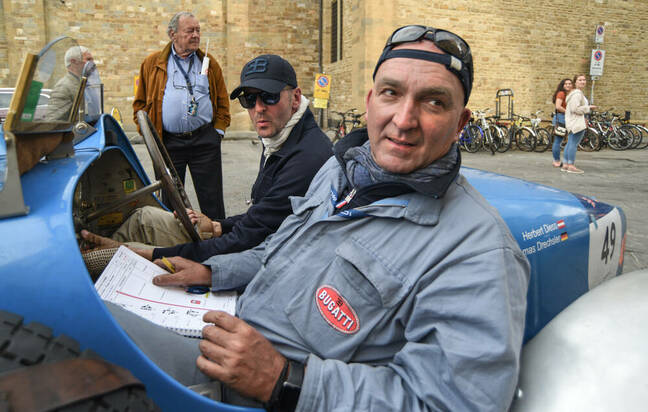 Herbert Diess (left) driving a 1928 Bugatti (with navigator Jon Drechsler on the right) in the 2019 Mille Miglia in Florence, Italy. Pic by: Bob Cullinan / Shutterstock

The exec is to leave on 1 September, three years before the end of his contract.

Diess had a tough start at the automotive maker, facing charges connected to the 2015 VW emissions-cheating scandal before they were settled by the company for as much as billions of dollars – with no admission of liability. Diess and his fellow execs always denied all charges. Diess's lawyers noted he could not have foreseen the impact of the emissions-cheating allegations on the market as he had only joined the company in July of the year the scandal broke.

Once he did join the automaker, one of his most important tasks was considered to be turning around Cariad, VW's software unit, which the group considered vital to the development of electric vehicles across its broad group of marques. EU lawmakers recently voted to ban sales of combustion engine cars from 2035, making the unit particularly key.

But delays shipping software from Cariad to other units has put back several launches including models of Porsches, Audis and Bentleys. Software bugs were also behind the initial launch of VW's ID models, which the manufacturer hopes will challenge leaders in the electric vehicle market.

Industry insiders have commented that failure to get Cariad back on track is a major contributor to Diess's departure.

It was not for lack of recognition of the importance of software development to the auto-industry's future, though.

In May, Diess said on Twitter that the "development of [our] own software expertise is the biggest switch that the automotive industry has to make – much bigger than the transition to e-mobility."

Upon his appointment, Diess seemed to recognize the need for change. He said that VW "needs a software culture."

This, he said, should be "different to the typical culture at VW, AUDI, Porsche: long term, brand, complex. Cariad has to be much faster to deploy basically on a weekly basis and to be attractive for software talent. I am concerned to get Cariad far enough away from Group, OEM processes and culture. Copy & paste will definitely not work," he posted on LinkedIn.

But three months ago, Diess seemed to be aware of the tension between Cariad and the rest of the VW Group, alluding to complaints in another LinkedIn post.

"…Cariad is getting faster, and to be clear: it's the most ambitious project of our entire industry to tap into the most relevant profit pools of the future – it will need two lifecycles to get realized, so I would like to say to the critics within the Group: it is better to work together on progress than just to complain," he said.

How well that went down with execs and managers throughout the VW Group remains to be seen, but in the latest twist the board seemed to agree the best way to make progress was without Diess.

VW is now turning to Porsche boss Oliver Blume to take the reins at the Group and change the culture Diess seemingly struggled to shift.

The post of chairman of the supervisory board at Cariad – previously held by Diess himself – remains vacant for the time being, but Blume is also expected to focus in on solving problems at the software subsidiary as a matter of urgency.

Speaking to Bloomberg, auto-industry analyst Matthias Schmidt said the unit needed new blood and doubted whether German automotive managers could address the issues on their own.

"They should have headhunted the best people from Silicon Valley," Schmidt said. "You can't lead on software with automotive people."

One person agreeing with the diagnosis is rival electric carmaker Tesla CEO Elon Musk. Tweeting his reason for Diess' departure, Musk said: "Software is the key to the future."

Don't have the budget or customer base for Graviton-class silicon? Intel thinks it can help
Systems13 Aug 2022 | 20