Modern life is expensive, but Britain's mobile data costs seem to be falling

The UK has climbed the rankings for cost per 1GB of mobile data, according to a report from Cable.co.uk, and has reached the dizzying heights of 59th place.

While at first glance the placing doesn't seem that much to celebrate, the $0.79 per gigabyte is a considerable improvement from 12 months ago, where the UK ranked 78th at $1.48 per gigabyte.

It is also an intriguing finding considering inflationary pressures elsewhere in the British economy.

Noting the improvement in the results of the UK, Dan Howdle, consumer telecoms analyst at Cable.co.uk, said: "Contrary to what one might expect as the costs of living continues to rise, the average package cost has fallen, from USD 23.28 to USD 17.58."

58 plans were assessed for the UK and the average was calculated as the median of package prices / data limits, according to the methodology used in the report [PDF].

The figure puts the UK comfortably ahead of the US, whose subscribers spend an average of $5.62 per gigabyte (leaving the country languishing in 202nd place out of the 233 countries ranked.)

However, before Brits get too smug, that $0.79 puts the UK neck and neck with Belarus and a long way behind Italy, the top ranked West European country at $0.12 per gigabyte and a second placed ranking overall. France was 7th, with $0.23 per gigabyte.

Topping the table was Israel, at only $0.04 per gigabyte (out of 20 plans surveyed) while the bottom was Saint Helena with an eyewatering cost of $41.06 per gigabyte, sparing the blushes of the Falkland Islands, which averaged a cost of $38.45 over the four plans surveyed by researchers.

As for the range in worldwide rankings, Howdle noted that the cheapest countries for data tended to be either ones with excellent data infrastructure, meaning providers can offer large amounts of data thus bringing down the price per gigabyte, or those with iffier infrastructure and so heavily reliant on mobile data, "and the economy dictates that prices must be low, as that's what people can afford."

"At the more expensive end of the list," he went on, "we have countries where often the infrastructure isn't great but also where consumption is very small. People are often buying data packages of just a tens of megabytes at a time, making a gigabyte a relatively large and therefore expensive amount of data to buy." 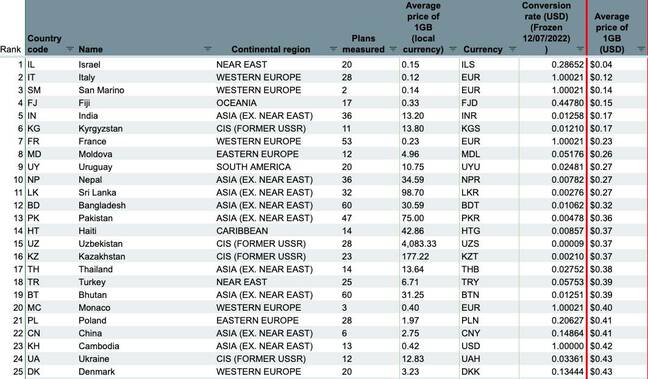 And for those countries around the middle of the pricing rankings? Howdle said that many had decent infrastructure and competitive mobile markets, "and while their prices aren't among the cheapest in the world, they wouldn't necessarily be considered expensive by its consumers."

The prices gathered were for SIM-only mobile plans, and only consumer SIM packages were included. It also included plans that featured calls and texts as well as those that were "pure data." It did not, however, look at the cost of roaming data when travelling abroad. ®