The Ocean Cleanup pulled all that trash in less than a year, and its newest system could collect 10x more

A Dutch startup working to remove plastic garbage from the Pacific Ocean said it's marking a major milestone: extracting 100,000 kg (220,462 lbs) of plastic from the Great Pacific Garbage Patch (GPGP).

The Ocean Cleanup has been working on ridding the world of the GPGP since 2013. Its founder and CEO, Boyan Slat, said the company's current cleanup platform, System 002, had collected 101,353kg of plastic since being deployed in August 2021. The cleanups swept a 3,000 square kilometer area of the Pacific, roughly equivalent to the size of Rhode Island or Luxembourg.

Along with 7,173kg of plastic removed using a previous prototype, its total collection has reached 108,526kg, or the dry weight of a space shuttle or two-and-a-half Boeing 737-800s, Slat said. Plastic removed by the group is sent for recycling, as well as used for its own merchandise.

The GPGP, at least the patch of it located off the western coast of the US and not on the other side of the ocean near Japan, is massive, allegedly occupying 1.6 million square kilometers, or around 617,000 square miles.

It's not all garbage islands floating amongst the ocean, though: Most of the trash in the GPGP is made of smaller chunks that have broken off of larger objects.

It's still going to take a while

That's an ambitious target. With System 002 only able to remove about 100,000kg a year it could take the better part of 1,000 years to clear it, if more plastic isn't added over the centuries. To address that, The Ocean Cleanup is pinning its hopes on a newer design, called System 03, which it said will be capable of collecting up to 10 times the garbage. 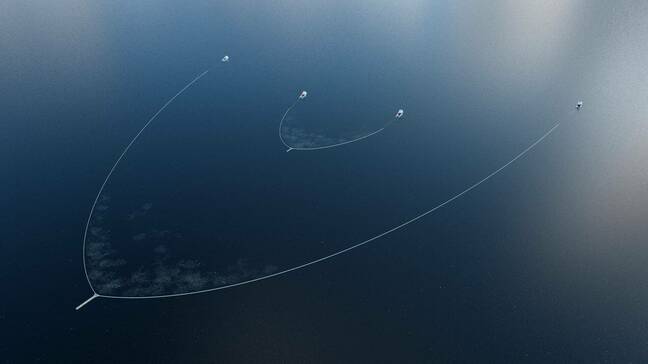 System 03 was announced earlier this month, and operates using the same principle as System 002: A long chain of floating buoys suspended between two boats is dragged slowly through the water, collecting trash and funneling it into a collection area at the rear. A 3-meter deep net wall runs the length of the system and collects plastics floating below the surface.

The Ocean Cleanup said the entire GPGP could be cleaned with a fleet of System 002s, but it would require more than 50 of them to do so in a reasonable time. System 03, on the other hand, could theoretically clean the entire patch with less time.

The Ocean Cleanup didn't say how long it would take those 50 or 10 systems to clean the GPGP, and hasn't responded to our emails to learn more about the company's long-term cleanup plans. ®