Will the real CDE please stand up?

If the real CDE is too much hard work for you or for your computer, there's a new version of the Not So Common Desktop Environment.

Very nearly a decade ago, we reported that the official Common Desktop Environment had been made open source. In its day, CDE was pretty much the unified desktop environment for commercial Unix OSes: it ran on almost every proprietary Unix and Unix-like OS there was, from IBM AIX to DEC's Tru64, even on DEC's OpenVMS.

NsCDE is on the screen of UNIX and Linux X11 display what brutalism [is] in ... architecture. Harsh, megalithic, strong and functional – not for everyone's taste

CDE dated back to the era of Windows 3 and OS/2 1, before the relative sophistication that Windows 95 delivered to the non-Apple-Mac-using world. It was a bit clunky, but even so, people liked it and were nostalgic for it. As we mentioned in the 2012 article, there was a project to re-implement it, called OpenCDE, but as far as we can see, it is no more: the OpenCDE domain is for sale, and there's been no activity on its Github in 11 years.

But a new contender has emerged: NsCDE, the Not-so-Common Desktop Environment. We'll let the project describe itself:

NsCDE is a retro but powerful UNIX desktop environment which resembles CDE look (and partially feel) but with a more powerful and flexible framework beneath-the-surface, more suited for 21st century unix-like and Linux systems and user requirements than original CDE.

Its developer, "Hegel3DReloaded", continues in the FAQ: "That said, NsCDE is on the screen of UNIX and Linux X11 display what is brutalism in the architecture. Harsh, megalithic, strong and functional – not for everyone's taste. NsCDE does not try to satisfy everyone and does not pretend to be what everybody wants and likes." (They also apologize for their English.)

Given our documented fondness for non-standard desktops, this is the sort of thing that appeals to us here at the Reg FOSS desk. Since the project released version 2.2 a few days ago, we thought we'd give it a try. Pre-compiled binary packages are available for Fedora, openSUSE, and Debian-family distros – the latter in both x86-64 and several Arm variants.

When the package is installed on a distro that already has a desktop, it picks up the existing text editor, file manager, web browser and so on. We tried it on the latest Debian, which defaults to the GNOME desktop. The result was confusingly inconsistent: some apps had title and menu bars, some didn't, and so on. (The especially uncharitable might say that this is entirely representative of the underlying GNOME environment.) 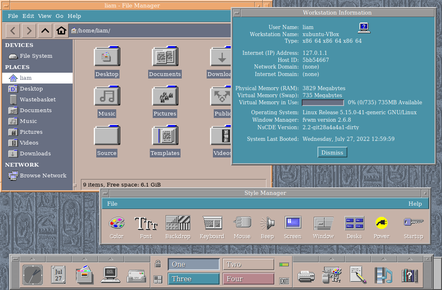 The NsCDE desktop is almost uncannily like the real thing, and where it's different, it's better

We tried again on the basis of Xubuntu, which mostly eschews GNOME components. We found the result far more harmonious, with the Xfce component apps, such as the Thunar file manager and Mousepad text editor, picking up NsCDE's chunkily retro themes and looking the part, and the environment works just as well as our faint recollections of 1990s desktops. It looks the part, and even the text-based first-run setup felt authentically 20th century.

From a fresh boot, Xfce used 495 MiB of RAM. In contrast, NsCDE used just 291 MiB, a quite substantial saving. NsCDE is based on the FVWM window manager, plus elements of its own, but the result is lightweight and felt snappy.

Installation is very straightforward: download the package, install it with dpkg, then install any missing dependencies:

That's all. After that, it appeared in the list of available sessions on our login screen, both under Debian with GNOME and Xubuntu with XFCE.

We thought it would be only fair to contrast it against the Real Thing. The real and now-open-source Common Desktop Environment is still in active development: It's now 13 releases on from the original version 2.2.0a. Version 2.5.0 was released just one day before NsCDE 2.2.

CDE's maintainers host it on Sourceforge rather than Github, and they don't publish binary packages: you have to clone the source tree and then compile it yourself. There are good comprehensive instructions though, and once we'd installed the provided list of dependencies, it built without a hitch, in about half an hour of compilation time in a two-core VM. 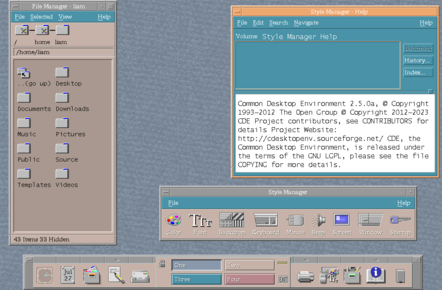 We ran it, and were greeted with an eerily similar environment. Even the text-mode first-run setup screen is quite similar. CDE includes its own shell, text editor, file manager and so on, because such things were very much not standard fixtures in the 1990s.

The only things that gave CDE's age away were that all its fonts lack anti-aliasing, so they look jagged on a modern flatscreen display – the Help menu is right-justified in the menu bar. Both are just like in the graphical version of WordPerfect for Linux, in fact.

The only big shock came when we checked memory usage with the free command: from a fresh boot, CDE used a whopping 892 MiB of RAM, over three times as much as NsCDE.

We found that CDE struggled a bit in places. Its terminal emulator can't handle modern apps such as htop or the Tilde text editor. We saw some screen-redraw issues in VirtualBox, too.

It's fun to experiment with vintage code in this way, but if you actually want to run a CDE-like desktop on a modern Linux distro, you'll probably enjoy the experience more with NsCDE than with genuine CDE – but they both work, and neither was hard to install.

In fact, CDE's documentation is excellent, with comprehensive manuals in the desktop, and very good build instructions, which even tell you how to add it to your login screen. NsCDE has comprehensive documentation too, most of which opens in your web browser. The resemblance between the new project and the original is amazingly close, and we're very impressed by NsCDE's fidelity.

Some people actually prefer the look of crisp fonts without anti-aliasing. If that sounds like you, then you may well find the combination of CDE and WordPerfect very pleasing. If you have a big screen and like a fairly minimal desktop experience that's highly customizable, and you're not fond of taskbars and full-screen app browsers and so on, both are worth a look. ®

Pinging search services in the US, China, Russia perhaps not ideal for privacy
Personal Tech26 Jan 2023 | 148