Not for the Linux illuminati, but a great starter Linux for non-Linux-heads

Linux Mint 21 is here, with a tweaked Ubuntu 22.04 base, natively packaged Firefox, Flatpak instead of Snap, and strategically pruned systemd.

Just a couple of weeks after we looked at the beta-test version, Mint 21 "Vanessa" is out. As usual, there are three different editions, each with their own release announcements: one based on Mint's flagship Cinnamon desktop, one based on the GNOME 2 fork MATE, and a slightly lighter-weight version based on Xfce.

"Vanessa" is the Mint team's take on Ubuntu 22.04, the latest version of its upstream distribution. The distro continues to slowly diverge from its Ubuntu basis.

Aside from the three desktops on offer, there are several salient differences. Mint removes Ubuntu's Snap packaging system, replacing it with Flatpak. That means Ubuntu's Snap-packaged Firefox isn't an option, so since version 20.3, Mint includes a native .DEB-packaged version of Firefox. And as we said when looking at the beta, Mint removes the systemd-oomd out-of-memory daemon. Version 21 also has a new Bluetooth applet, and some updated supporting apps, including the Timeshift system-snapshot tool, the document viewer, and others. 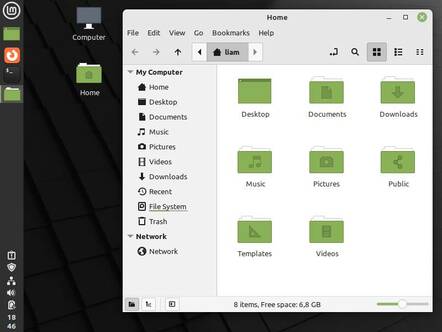 The Cinnamon desktop remains Mint's flagship. It looks good, has plentiful addons, but like the GNOME Shell it was forked from, customization is limited

All versions share the same system requirements: a minimum of 2GB of RAM, although 4GB or more is recommended, and 20GB of hard disk space. In our testing, it refused to install on a 10GB virtual disk, saying it needed at least 14GB. Like its progenitor, Mint is 64-bit only.

If you are averse to Ubuntu for some reason, or you have a well-specified 32-bit machine that you can't affordably upgrade, the team's other offering is Linux Mint Debian Edition; we looked at the new version 5 in March.

We installed all three editions in VirtualBox, and tried the MATE edition on an old Thinkpad W520. All of them installed fine, and indeed the experience was a bit better than in Ubuntu itself. For instance, when installed in English - with Mint that's what you get - Ubuntu geolocated us to Prague, which is correct, but then sets the system locale to "česko", which isn't. On the Thinkpad, the "Driver Manager" tool detected the machine's nVidia Quadro 1000M GPU and installed the correct driver, complete with GPU-switching, with a single click. 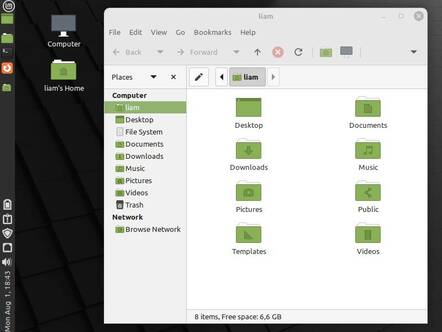 The MATE edition is a bit more lightweight and a bit more customizable, but it doesn't handle a vertical taskbar well – not ideal for a widescreen display

However, there were some minor niggles. Driver Manager didn't detect that the OS was running in a VM, so didn't offer to install the VirtualBox guest additions. It should – they're open source and in Ubuntu's repositories. On the bare metal, there was a spurious warning about there being no ESP and the system probably failing to boot – but that's an Ubuntu bug, as we mentioned when looking at the Ubuntu 22.04 beta.

To test resource usage, we did full installs of all three flavors, complete with optional codecs, in identical VMs, with 4GB of RAM and a 16GB virtual disk. We then installed all outstanding updates and cleared the package cache with apt clean.

The results closely matched the beta:

Our recommendation would be to go for Cinnamon if you need fancy stuff like fractional scaling or different monitors with different scale factors, and Xfce otherwise. Xfce handles a vertical taskbar better than Cinnamon and much better than MATE, as we show in the screenshots.

In Xfce we gave the taskbar four rows, but you can choose how many you want. Neither of the others can arrange status icons in rows, meaning that they take a lot of your vertical space – particularly precious on a widescreen display. 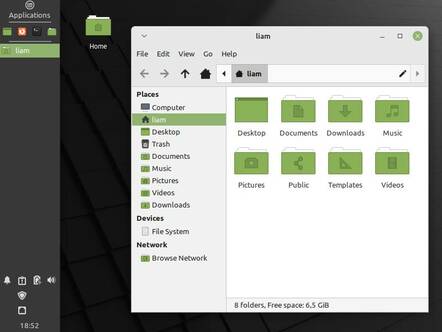 The Xfce edition of Mint is for us the most customizable and can be set up to make the best use of a widescreen display – such as a multi-row taskbar."

Nothing is perfect, and that applies to Linux as much as to any other OS. However, Mint gives about the least trouble of any desktop Linux we have seen. Yes, it uses systemd; yes, it uses Flatpak, but that is one of the easiest ways to install proprietary apps such as Slack or Zoom, which don't offer Linux repositories and so won't automatically get updated with the rest of the OS.

If you have enough Linux knowledge to care about which desktop it uses, or about behind-the-scenes components like systemd or Flatpak, there are other distros that will suit you better: more customizable, more colorful, and more tweakable – such as Garuda Linux.

If you have a 64-bit PC from within the last decade and just want a general-purpose desktop OS which has a familiar desktop layout and gets the job done with as little fiddling as possible, Mint readily beats Ubuntu, Fedora, openSUSE, or any flavor of Debian. It's the easiest, friendliest Linux for non-techies. You can download it directly from the Mint site, including mirrors around the world and Bittorrent links, and the company has a useful installation guide. ®