Desktop Tourism I spend a lot of time in a browser – for years I've used half a dozen pinned tabs to provide easy access to web apps like The Register's CMS and TweetDeck. But when I tried Google's browser-centric ChromeOS Flex I immediately lamented the lack of apps and came to despise Chrome.

I think "a slightly posh version of Chrome OS" is a more accurate description.

Google also reckons the OS offers "a sustainable way to modernize devices that you already own."

Google's claim that ChromeOS Flex is ecologically responsible is optimistic

I already own a 2017 MacBook Air 7.2, which one of my kids retired. Four years of use at school and university had left it dented and a little rattly, but operational – save for a battery that seldom holds more than a few minutes’ charge.

I decided to try ChromeOS Flex and see if it would make the machine the kind of computer I could leave in my home office as a tolerable backup if my main machine suffered a misfortune.

Installing the OS requires you to first add the Chromebook Recovery Utility to Google's Chrome browser. The Utility walks you through the process of creating a boot disk on a USB drive or SD card. With that job done you can either run ChromeOS from removable media, or do a full install.

In either scenario you need to divert your target machine's boot process away from its internal drive to the boot disk you just created – which usually involves a keypress during restart to produce the choice of running from the boot disk or a full installation.

Google's boot disk creation process is uncomplicated. I dived into my USB stick collection and found one of the required 8GB or greater capacity and soon had a working disk.

But I but forgot to consider the speed at which my chosen disk – a weird one from ASUS that looks like a Starfleet logo – moves data. It turned out to be unusably slow when used to run the OS without installation on the MacBook's SSD.

I know: silly me.

After some negotiations with my offspring, who admitted they had gone without the data on the MacBook's disk for eight months and wouldn't miss it, I went for a full install. 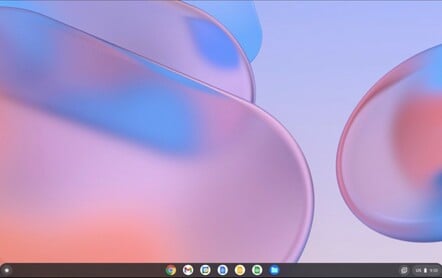 An hour later, the MacBook had become a ChromeOS FlexBook – after a few jittery moments when the install process displayed white noise on the machine's screen. Setup was slick and simple – once I fed the machine my Google credentials and a Wi-Fi password it just started working.

If you've used a Chromebook you know the drill: Google offers a few apps, but expects you'll do almost everything in its Chrome browser.

I'm one of those people using Google's legacy (free) version of the Workspaces cloudy productivity suite. Here at The Register we also use Workspaces. Signing in to ChromeOS Flex therefore gave me a very familiar experience – and some frustrations.

In Windows or macOS, Chrome is good at allowing tabs to be logged into different Workspaces accounts. ChromeOS Flex treats whichever Google account you tie to the OS as the boss of the machine. Adding my second Google account, one tied to The Reg, took more effort than I wanted.

One thing ChromeOS Flex can't do is run Android apps. Other Chromebooks can, so this is a significant omission. Zwift, the cycling metaverse I employ and enjoy for early morning exercise, is available on Android and I quite fancied using the MacBook as a backup machine for that, and as a test of ChromeOS Flex's ability to do things like handle multiple simultaneous Bluetooth connections while running a graphics-intense application.

Sadly we'll never know, because the OS is so disappointingly browser-based.

Which brings me to some obscure browser history.

In the mid-2000s, a thing called an SSB – which stood for "single site browser" or "site-specific browser" – briefly became popular. SSBs offered a browser window slaved to a single website and shorn of an address bar and all navigation buttons. SSBs convinced the OS they were applications that deserved a place in the ALT-TAB rotation.

SSBs were persistent: you could create a shortcut to a web page and it would always spawn in its own SSB window. Just like an application.

I never understood why SSBs didn't take off, and using ChromeOS Flex made me pine for them – because constantly being kicked into another Chrome tab is not much fun. Yes, it's possible to pull tabs out into their own window, but that takes time.

Desktop tourism? PCs and alternative devices have increasingly diversified into myriad and marvellous forms, so I've decided that in 2022 I'll use a different one each month and share the experience. This article is the latest part in this series of mini-reviews and is actually the July instalment for reasons too tedious to detail.

If Google had brought an SSB-like experience to ChromeOS Flex, I feel the product would be much more useful.

I also found the OS immature. I wanted to include some screenshots of my experience in this story. Doing so in ChromeOS – not Flex – requires a three-way keypress that includes the "Show Windows" button included in Chromebooks.

MacBooks have no such key. And if Google has documented how to emulate one, I could not find evidence.

I therefore turned to Chrome Extensions. Most of the screenshot-taking extensions I found issued ominous warnings they could control all data in a browser window. I decided to risk that, dear reader, but couldn't find one that would reliably take a screenshot of the entire ChromeOS Flex experience with multiple windows and Google's taskbar unfurled

If something as simple as a good screenshot is hard to do, what other frustrations might await users?

Too many, I fear. So while I was able to get through a day's work in the OS, moving back to Windows was a relief.

Google bills ChromeOS Flex as a fine way to connect to virtual desktops. I tested that by using the Chrome Remote Desktop extension to connect to my workhorse Windows laptop, which was connected to an external monitor at the time.

ChromeOS Flex shoe-horned the remote view of the Windows machine into an unusable strip across the center of the MacBook screen. Once I yanked the HDMI cable from my Windows laptop, desktop access was smooth and slick, but needed a little work to resize the remote machine to a usable size.

At the end of my time working in ChromeOS Flex I wanted to reinstall macOS. The MacBook would still be a machine of last resort, but at least it would be more usable, more often. I suspect it would be more manageable, too, given that owners of the Windows and macOS fleets Google has targeted with ChromeOS Flex may already be familiar with client-wrangling tools.

I also came away thinking that Google's claim that ChromeOS Flex is an ecologically responsible alternative to junking old endpoints is optimistic. My MacBook's power supply has kinked cables: how long before they give out? And how long will the rattly and floppy hinge remain viable?

I'll therefore happily put ChromeOS in the recycle bin. And suspect the MacBook really belongs there, too. ®