Patrolling quadrupeds not fitted with 7.62mm tank machine guns – yet

Space Force, the sixth branch of the US military, has tasked robot dogs with patrolling its base at Cape Canaveral.

Towards the end of last month, the Space Launch Delta 45 unit, which is responsible for all East Coast space launch operations, conducted a demonstration using Vision 60 quadruped unmanned ground vehicles (Q-UGVs) built by Ghost Robotics. Here they are, looking all the world like a more menacing version of Boston Dynamics' Spot. 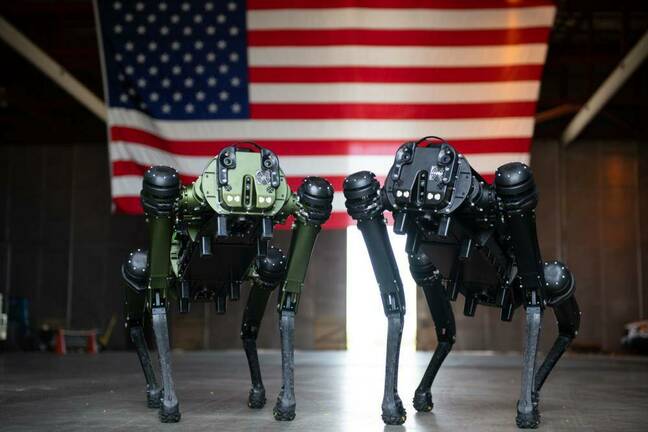 This means that if a future saboteur were to pop their head over the perimeter at the Florida base, they could be met by a truly sci-fi scene – mechanical quadrupeds stalking the grounds of the first independent military unit dedicated to off-world matters.

As reported by Space.com, the Department of Defense said the idea was for the robots to carry out "damage assessments and patrol to save significant man hours."

Suggesting a successful demo, the department claimed: "The Q-UGV effectively demonstrated how manual and repetitive tasks can be automated using ground-based robots."

Ghost Robotics says of the Vision 60 model: "Our Q-UGVs are architected to allow rapid adaptation to new environments using our proprietary blind-mode control core that mimics how mammals operate across a range of urban and natural environments. Even if the environment is completely unknown, vision sensors degrade or fail, you can be assured that when our legged robot does fail, slip or fall, it will get right back up and continue moving.

"Our goal is to make our Q-UGVs an indispensable tool and continuously push the limits to improve its ability to walk, run, crawl, climb and eventually swim in complex environments that our customers must operate in, day in and day out. Ultimately, our robot is made to keep our warfighters, workers and K9s out of harm's way."

Footage from the company below shows the Vision 60 traversing marshy ground and slopes with ease.

While BigDog was incredible to witness back in 2005, the field of ground-based drones has developed in leaps and bounds since, putting Boston Dynamics' military pack mule to shame.

Q-UGVs are growing in adoption too. US company Farmers Insurance is using the Spot model to assist its agents with property inspections and "in-field catastrophe claims" or assessments in the immediate wake of natural disasters and major events.

Although Space Force's Vision 60 is not currently fitted with a 7.62mm tank machine gun (unlike Temerland's GNOM, which is seeing action on the front lines of Ukraine), it is becoming increasingly easier to believe that the wars of the future may be fought in part by robots. ®

Updated Floats over missile silos, shooting it down ruled more dangerous than whatever it's up to
Security3 Feb 2023 | 113

US blocks $400m Army HoloLens orders, Microsoft left with a tenth for R&D

Nausea and headaches do not a fit fighting force make, so back to the lab for version 1.2
Personal Tech12 Jan 2023 | 6