Version 2.4 of Rescuezilla - which describes itself as the "Swiss Army Knife of System Recovery," - is here and based on Ubuntu 22.04.

Rescuezilla is a fork and continuation of the Redo Backup and Recovery project. "Redo" went quiet after 2012, with no new releases until 2020. So, in 2019, the developers behind Rescuezilla forked Redo, updated it, and continued development.

Since then, the older project has come back to life. A hostile third party had bought its domain name, so rather than pay the typo-squatters' ransom, its developers simply renamed the project to Redo Rescue and restarted work under the new name. (The old URL, which we won't link to, now redirects to an advertising site – so you should probably avoid it.) It looks like Rescuezilla is a friendly fork, inasmuch as the maintainers of Redo Rescue actually link to it. (Good on them!)

RedoRescue is in active development once again: there's a new version 4.0, based on Debian 11, released in October 2021, although the website still describes version 3 from 2020. Even so, Rescuezilla is a little more modern still. It's now based on Ubuntu rather than Debian, and version 2.4 updates this to Ubuntu 22.04.

The release notes mention an issue with graphics drivers and there should be a version 2.4.1 that fixes this very soon – but saying that, The Reg FOSS desk encountered no problems with it either in a VM or on bare metal. 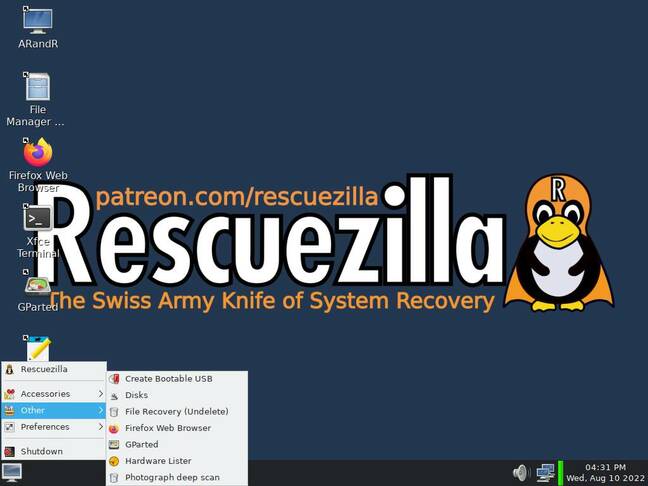 There are lots of screenshots of Rescuezilla's main screen on the website, but more useful tools lie within its start menu

Rescuezilla looks to be a handy tool, although perhaps not quite as versatile as it boasts. We looked at Clonezilla 3 recently and the core functionality is quite similar, but Rescuezilla wraps a friendly GUI around the rather intimidating, text-mode-only Clonezilla. It has two core functions, the first of which it calls Backup and Restore, and the second of which it calls Clone.

The former images an entire drive to an image file on a removable device or across the network, or restores such an image onto a drive. The latter function, Clone, works directly disk-to-disk. The main screen also has functions to verify an image, or to explore its contents. And it's possible to restrict the functions to just certain partitions.

If those functions aren't what you want, there are also links on the desktop to Firefox – in this version, a natively packaged version rather than a Snap – and to Gparted, a text editor and a terminal emulator. There's a minimal LXDE desktop, and the start menu has an image viewer, a file manager, a screenshot tool, and the text-mode TestDisk file-undelete tool and PhotoRec, which can scan damaged or corrupt media for image files.

Rescuezilla claims to be able to cope with a wide range of disk formats and file systems, including Windows and Mac volumes, so although NetBSD is admittedly niche, we thought it might handle a BSD FFS volume. Since we still had it to hand, we tried Rescuezilla on the VM from our look at NetBSD 9.3 earlier this week, but it was unable to mount the volumes.

Rescuezilla's range of functionality is not bad at all, but at the very least, we'd also like to see the very helpful Boot-Repair included. Right now, you can copy partitions back onto a disk, but you can't reinstall GRUB to make them bootable, which is a serious omission.

Perhaps reaching even further, some tools to clean up broken Windows machines would help too. Rescuezilla does have kernel 4.15 as well as NTFS-3G and the ntfsfix command preloaded, so if you know how to manipulate Windows drives, you could attempt manual repairs, but some extra automation wouldn't hurt. Say, a script to find Windows partitions, delete the paging, swap and hibernation files, and empty all the Temp directories then schedule a disk check. These would be a big win.

Rescuezilla has more options than Redo Rescue, and it's far friendlier than Clonezilla, so it beats both. Saying that, there's still room for improvement: we'd like to see options for bootloader recovery, for a start. Until then, while this is a useful tool that will replace Clonezilla on the author's emergency USB key, we will keep System Rescue 9 and Hiren's BootCD PE on there too. ®

Decent upgrade from older versions, essential if you're still on OpenOffice
Applications3 Feb 2023 | 17