The discovery could help scientists further understand the origins of life

Moon meteorites found on Earth contain trace gasses that lend further support to the widely held belief that our largest natural satellite formed from chunks of our planet that were ejected in a massive impact.

Patrizia Will, a doctoral research student at ETH Zurich, studied six separate Moon rocks picked up by NASA in Antarctica, and discovered traces of helium and neon trapped inside the chunks of lunar basalt.

The discovery, Will said, is a first: "Finding solar gases… in basaltic materials from the Moon that are unrelated to any exposure on the lunar surface was such an exciting result."

Will and her fellow scientists concluded that the helium and neon traces found in the rocks were of Earth origin because of how they were likely involved in the Moon's formation. As it formed, the scientists said, the Moon pushed magma up to its surface, where it rapidly cooled into rocks, like the ones later found on Earth. 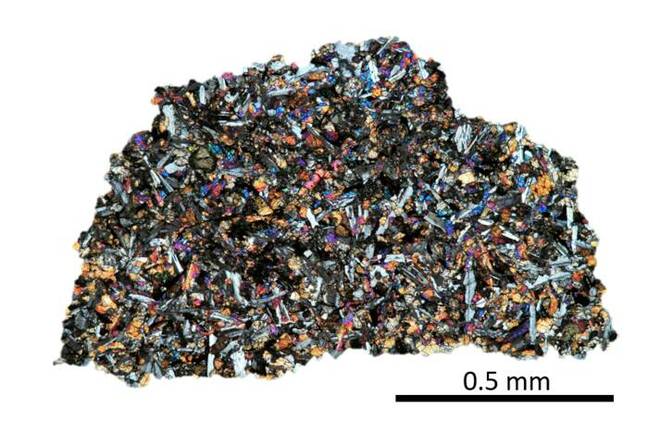 Meteorite LAP 02436, one of those tested

Additional basalt formed over the top of the earliest hardened magma, protecting the older rocks and their gasses from cosmic rays and solar winds.

The gasses themselves were trapped in particles of glass, leaving behind isotopic signatures indicating that they were present from the earliest days of the Moon's formation. While some noble gasses are present on the Moon's surface, the ETH Zurich team said the presence in lunar basalt indicates the gasses came from the interior of the early Moon, not external sources like solar winds.

According to the team, the noble gas mass spectrometer used to test the rocks confirmed that fact.

Dubbed "Tom Dooley" for the Appalachian folk song known to the team through The Grateful Dead's recording of the tune, the instrument was able to detect helium and neon in much higher quantities than expected, suggesting it didn't come from chance gusts of interplanetary wind.

"The research team was able to measure sub-millimeter glass particles from the meteorites and rule out solar wind as the source of the detected gases," ETH Zurich said.

Professor Henner Busemann of ETH Zurich's Earth sciences department said he believes the discovery will lead to a race to find heavy noble gasses and isotopes in other meteorites. He speculates future experiments may look for xenon and krypton, which are harder to identify, as well as volatile compounds like hydrogen and halogens.

Busemann is interested in learning more about how such gasses survived the "brutal and violent" formation of the Moon, which may help shed light into the origins of life.

"Such knowledge might help scientists in geochemistry and geophysics to create new models that show more generally how such most volatile elements can survive planet formation, in our solar system and beyond," Busemann said. ®