Do we want to recognise machines as authors?

The creative nature of neural networks is leading some to consider whether it might be worth changing current US laws that only grant copyright protection for works created by humans.

Generative models capable of automatically producing paragraphs of text or digital art are becoming increasingly accessible. People are using them to write fantasy novels, marketing copy, and to create memes and magazine covers. Content automatically created by software is poised to flood the internet for better or worse as AI technology is commercialized. Can any of it be legally protected by copyright laws?

Take Cosmopolitan's recent and "world's first artificially intelligent magazine cover," for instance: the image of a giant astronaut walking on the surface of a planet against a dark sky splattered with what looks like stars and gas as produced by OpenAI's DALL-E 2 model. Karen Cheng, a creative director, described trying various text prompts to guide DALL-E 2 in producing the perfect picture.

The winning sentence "wide-angle shot from below of a female astronaut with an athletic feminine body walking with swagger toward camera on Mars in an infinite universe, synthwave digital art," is what inspired Cheng, according to Cosmopolitan. She then edited DALL-E 2's image to create the final sleek cover for the glossy magazine. Who owns the copyright? Who is the author of the image?

I used @OpenAI #dalle2 to create the first ever AI-generated magazine cover for @Cosmopolitan!! The prompt I used is at the end of the video #dalle pic.twitter.com/sbM2qbTAbq

The answer likely depends on how much human input was required to create something, Mike Wolfe, a copyright lawyer from Rosen, Wolfe, and Hwang, told The Register.

"Where AI has played an essential role in the creation of a work, there are still pathways to some copyright protection. Even with a very capable AI, there will probably be a lot of room for human creativity. If AI helps generate a song and makes the bass line, but the creative professional makes it more complete by filling in gaps to make a cohesive piece of music, that act itself would likely give right to copyright on the basis of human authorship."

What that could mean in practice is maybe the melody or bass line can be used freely by a third party, since those parts were generated by a machine and aren't protected by copyright, but people can't copy the whole song verbatim, Wolfe said. In reality, however, it may not be that easy to separate human and machine labor. Going back to the example of the Cosmopolitan front cover, it's not entirely clear which parts of the image were created by DALL-E 2 and which parts by Cheng.

Creators often exert minimal influence on a model's output, especially for more visual systems like DALL-E 2. Many experimenting with similar systems like Craiyon or Midjourney, for example, tinker only with the text prompts and leave the resulting image untouched. Under US copyright law, these images are technically not subject to copyright protection. Only "original works of authorship" are considered. "To qualify as a work of 'authorship' a work must be created by a human being," according to a US Copyright Office's report [PDF]. 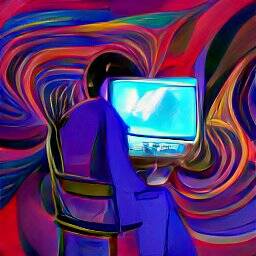 One man, Stephen Thaler, founder of Imagination Engines, a software company based in Missouri, learned this the hard way. The US Copyright Office rejected his application attempting to register a digital image he claimed "was autonomously created by a computer algorithm running on a machine." He wanted his software to be registered as the author of the picture, and for the image's copyright be transferred to him considering he owned the machine.

The US Constitution granted Congress the power to protect IP in Article I, Section 8: "To promote the progress of science and useful arts, by securing for limited times to authors and inventors the exclusive right to their respective writings and discoveries."

Thaler's lawyer, Ryan Abbott, believes the US Copyright Office is making a mistake by rejecting his application attempting to register authorship to AI. "AI is able to make functionally creative output in the absence of a traditional human author, and protecting AI-generated works with copyright is vital to promoting the production of socially valuable content. Providing this protection is required under current legal frameworks," he previously told The Register.

But not all legal experts agree with him. "The burden should always be on the creator to prove that the copyright they receive benefits the public. To my mind, that burden has not been carried for machines. Granting rights to AI-generated works doesn't at this time seem to likely to make us wealthier or more advanced," Wolfe told us.

"Do we want to treat machines as equals under the eyes of the law? There doesn't seem to be a lot of appetite for that. But as you see more and more impressive outputs from these really powerful systems, I'm sure the calculus might change." ®