Presiding officer was not impressed by Cupertino's arguments or behavior

Apple has been ordered to repair a MacBook Pro that displays all the symptoms of FlexGate – the syndrome of screen defects that the company has previously repaired for free – but which the company does not believe has the problem.

The Order came from the Civil and Administrative Tribunal in the Australian State of New South Wales (NCAT), in response to an action brought by Tristan Goode – co-owner of OpenStack consultancy Aptira and a former OpenStack board member.

Goode bought a 2017 MacBook Pro and, as he had more time in which to use it during the COVID-19 pandemic, noticed the distinctive "stage light" effect that some MacBooks suffer because their video cables are too short. The displays produce odd artefacts or even become inoperable. 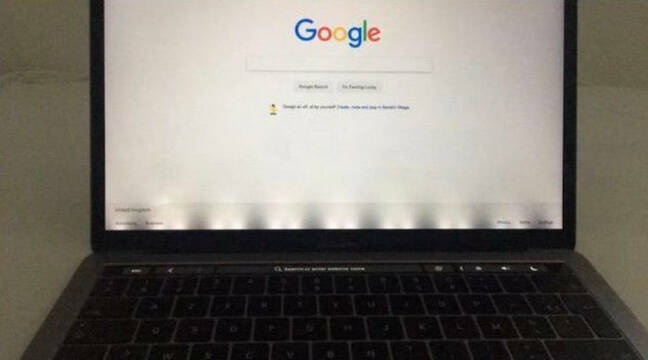 Not a good look – A photo of the 'stage lights' effect produced by FlexGate. Click to enlarge

Apple has acknowledged that some MacBooks have the problem, and in 2018 arranged free repairs for machines sold in 2016.

Goode complained to Apple about the issue in his machine, but was rebuffed because his MacBook is a 2017 model that Apple does not acknowledge has the curtailed cable. Apple quoted him AU$977 ($695) to replace the screen, but Goode was not happy with that offer.

He found numerous complaints – including over 80 videos made by independent Mac repairers – depicting MacBook models from 2017 and later years that clearly described the same problems that Apple acknowledged in its 2016 machines. Teardowns of those machines suggested they have the same cable Apple happily replaced in 2016 machines.

Goode bought the replacement screen so he could assess the parts it used, and felt it had the unhelpfully short cable Apple replaced in other models.

An attempt to have Apple acknowledge the issue in his 2017 machine failed, as did an attempt to involve the local fair trading regulator, which takes up complaints on consumers' behalf.

Goode therefore arranged an NCAT hearing and compiled extensive documentation of the FlexGate problem appearing in MacBooks other than those Apple acknowledges as impacted by the issue. Goode also used metadata describing the number of times his MacBook's battery had been charged to demonstrate his machine had been used lightly – so could not have been opened and closed enough times to wear out the cable if it had been sufficiently robust.

Apple disputed his analysis and proceeded to an NCAT hearing that was staged online last week.

The Register tuned in. The presiding officer had clearly handled matters involving Apple before, first wearily asking if there was any possibility Apple would settle the matter – the answer was the expected "no" – and later sharing an observation that the Apple representative's audio was characteristically poor and that the company should really do better in future hearings.

Goode made his case that his MacBook had the same problem as a 2016 model because it used the same known-to-be-inadequate parts. Apple's representative contested that Goode's machine was old enough to fail but could not respond to many of the presiding officer's questions – such as why the 2017 MacBook range was not included in Apple's free repair program.

Apple's rep, who was not in Australia, mentioned Apple's environmental impact FAQ to assert that the company designs its products to last four years – making problems that manifested in 2021 reasonable for Goode's 2017 MacBook.

Goode countered that the same FAQ states: "Most Apple products last longer and are often passed along, resold, or returned to Apple by the first owner for others to use." He even mentioned that a 2011 MacBook he gave to a relative still performs perfectly (running Linux to avoid using an unsupported OS).

Apple's rep could not resolve the seeming contradiction of the passage Goode quoted, and also said she would have to seek guidance on how and why the company decides which machines deserve free fixes. Nor could Apple's rep explain if parts used in the 2017 MacBook differ from those present in models that were fixed for free.

The presiding officer at NCAT did not make an immediate decision, but later issued a written Order – seen by The Register – in which NCAT declared itself "satisfied that a reasonable consumer fully acquainted with the state and condition of the applicant's MacBook would regard it as not free from defects at the time of its supply and for that reason not of acceptable quality."

The Order does not, however, offer an opinion on whether 2017 and 2018 MacBooks have the FlexGate issue. Deciding that matter was not necessary to determine that this individual computer was not free of defects.

The issue of whether MacBooks made after 2016 have the FlexGate issue was therefore left undecided.

NCAT is not a court of law and is neither equipped nor required to hear evidence that would allow that kind of decision. Nor are NCAT decisions used as precedents – other than by NCAT itself.

The decision therefore leaves the way open for Australian MacBook owners to seek redress, but doesn't allow either consumers or Apple a precedent.

Goode feels confident that the evidence and result show that Apple has a systemic issue, and plans to share the filings and results of his case widely, in the hope it gives other possibly FlexGate-stricken Mac owners a chance to seek redress.

"It would end the grief for many affected MacBook Pro purchasers around the world if Apple just fessed up to the fact FlexGate affects many more models than they have admitted to," he said. ®