Superconductive hybrid magnet claimed to be 4,500 times stronger than a fridge stick-on

Chinese scientists claim to have broken the record for producing the strongest steady magnetic field, one that's at least a million times more powerful than planet Earth's, using a superconducting system.

The hybrid magnet was described as being made out of a resistive insert within coils of superconducting material. The magnetic field is strongest in the circular gap or bore of the magnet, shaped like the hole of a doughnut, and measured 45.22 tesla (T), making it a tiny bit stronger than the 45 T hybrid magnet reported by the US National High Magnetic Field Laboratory (MagLab) in 1999.

The device's designers, based at the Hefei Institutes of Physical Science, a research institution under the Chinese Academy of Sciences, said the progress was down to the magnet's materials.

"To achieve higher magnetic field, we innovated the structure of the magnet, and developed new materials," Guangli Kuang, a professor and the academic director of the High Magnetic Field Laboratory at the Hefei Institutes of Physical Science's Steady High Magnetic Field Facility (SHMFF), said in a statement.

"The manufacturing process of the bitter disks was also optimized," he added. Yes, bitter disks.

The details of the exact experimental procedure and set up are thin. The lab did publish this graph, however, recording the magnetic field strength of its magnet reaching over 45 T: 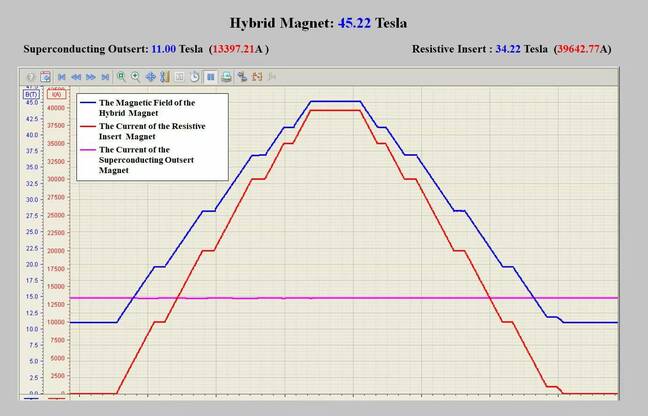 MagLab Director Gregory Boebinger told The Register: "The announcement of this landmark achievement comes from talented engineers and scientists at one of the world's great magnet laboratories. We have great confidence in the report and look forward to a full scientific publication that goes into the many technical details about the magnet and the accomplishment of 45.22T."

"In 1999, the MagLab was able to advance the world record from 36T to 45T in large part due to the fact that the MagLab's power plant was much larger than had previously been devoted to generating powerful magnetic fields," Boebinger continued.

"Previously to the 45 T mark, world-leading electromagnets had used roughly 10 MW of power. The MagLab uses more than 30 MW to have advanced the record to 45 T."

He went on: "Since 1999, a number of magnet laboratories around the world, including the laboratory in Hefei, but also two laboratories in Europe in Grenoble and Nijmegen, have built the larger infrastructure that makes achieving 45 T a possibility."

For comparison, a strong refrigerator magnet has a field strength of about 100 Gauss or 0.01 T, making the hybrid magnet more than 4,500 times stronger. The Earth's magnetic field is even weaker at 0.00003 T.

There are magnets technically capable of reaching even higher magnetic field strengths, although they aren't steady like the one produced by the SHMFF's hybrid system. Physicists at MagLab in Florida, for example, reported they had reached a whopping 100 T in 2012 using a multi-shot magnet but the field only lasted 15 milliseconds. 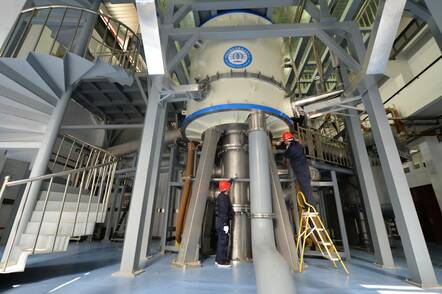 It's tricky keeping magnetic field strengths steady for hybrid magnets, too; they have to be cooled using liquid helium and a constant stream of water to produce steady magnetic fields. "[SHMFF's] magnet is comprised of an 11.5 T superconducting outer magnet within which is nested a 33.5 T resistive magnet. It is this inner magnet that consumes all the electrical power," Boebinger told us, explaining also why it's called a hybrid.

"Because a hybrid magnet leverages two unique magnet technologies, it takes quite a bit of unique infrastructure to operate, including: a 2,800 liter liquid helium cryogenic system to cool the superconducting magnet to 1.8 Kelvin (or -271 degrees Celsius, -456 degrees Fahrenheit) and more than 4,000 gallons of deionized water flowing through the resistive magnet every minute to keep it from melting.

"One of the biggest challenges results from concentrating 33 megawatts of electrical power in a small volume, because this creates huge forces that seek to rip apart the magnet. As such, these magnets must be constructed out of exotic materials that are as strong – sometimes stronger – than steel."

Boffins believe that generating increasingly stronger magnetic field strengths from hybrid magnets will advance our scientific understanding of electric and magnetic properties of materials, allowing scientists to make new discoveries in physics or even build new types of semiconductors.

The Register has asked the Hefei Institutes of Physical Science for further comment. ®

UN's ITU election may spell the end of our open internet