Did someone say ECC on an SBC?

That Raspberry Pi 4B feeling a bit pokey? Asus' Aaeon division has managed to fit an eight-core Xeon processor, complete with error correcting memory (ECC) support, and a PCIe 4.0 x8 slot into a four-inch single board computer.

While nowhere near as small as a RPI 4B or a Compute Module 4, Aaeon's Epic-TGH7 packs substantially higher performance into a rather diminutive form factor. The system can be specced with your choice of 11th-gen Intel CPUs ranging from a power-sipping, dual-core Celeron 6600HE; quad, hexacore, or octacore i3, i5, or i7 processors; or for those looking for ECC the Xeon W-11865MRE. However, as with most such systems the microprocessors aren't socketed, which means you won't be upgrading down the line. 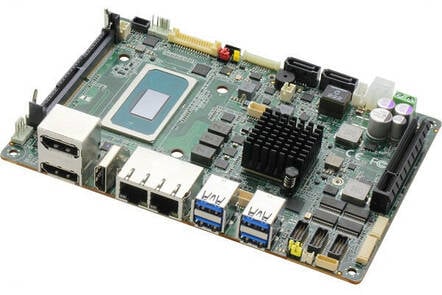 All five chips are based on Intel's last-gen Tiger Lake processor family, which primarily targeted laptops and other small form factor PCs. The Xeon W-11865MRE shares much in common with its i7 counterpart, including a 2.6 GHz base clock, a max turbo that tops out at 4.7 GHz, and a configurable TDP up to 45W, according to Intel's documentation. The biggest difference between the two appears to be support for ECC memory.

Speaking of which, the board can be equipped with up to 64GB of DDR4 operating at a relatively quick 3200 megatransfers/sec, by way of a pair of SODIMM memory slots located adjacent to the CPU.

The kit also features no shortage of I/O with a pair NICs operating at 2.5 Gbit/sec and 1 Gbit/sec, dual displayport 1.2, HDMI 2.0, four 10Gbit/sec USB 3.2 Gen 2 ports, and a full complement of USB 2.0, VGA, and serial headers for additional connectivity. For storage, the board accommodates a half-size m.2 mSATA/NVMe SSD, and a pair of SATA interfaces.

Finally, the SBC features an open-ended PCIe Gen 4.0 x8 slot for additional connectivity. However, due to the limited power budget afforded the slot — just 25W compared to a standard PCIe x16 slot's 75W — you won't be attaching any high-end GPUs or accelerators without hacking together some sort of supplemental power.

Thankfully, all five processors feature Intel's 11th Gen UHD graphics with up to 32 execution units and support for Quick Sync video encoding. So while you probably won't be ripping down the streets of Cyberpunk 2077 at high frame rates on this thing, it can manage outputting to an 8K monitor should you desire.

Fitting all of that performance into such a small form factor isn't exactly cheap, however, and you won't find this thing retailing anywhere close to the RPI 4B's $35 MSRP. Aaeon is offering the i3 equipped variant for $812 while the i7-based version is selling for $1,167, and we can assume the Xeon-toting version will retail at a premium to that.

The pricing reflects Taiwan-based Aaeon's target market: industrial, IoT, and embedded environments. The company touts the SBC's high-speed connectivity, PCIe expansion, and onboard graphics processing as being ideal for healthcare imaging and military defense applications. The company also cites digital signage as a potential use case.

But at the end of the day, it's a PC, which means there's nothing stopping a sufficiently motivated customer from building one these into their next hobbyist project or spinning up Proxmox, ESXi, XCP-NG or similar and using it as an ultra-low power virtualization host.

And for those looking for something equally powerful in an even smaller package, Aaeon unveiled a credit-card-sized SBC in July with your choice of a quad-core i7-1185G7E or an eight-core AMD Ryzen Embedded V2718, as we previously reported. ®